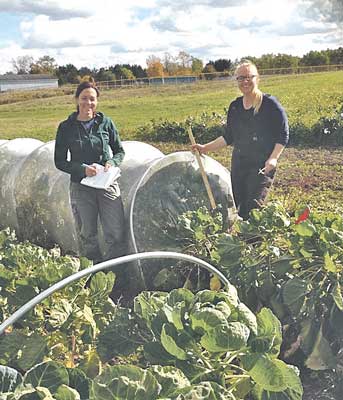 “Swede midge can become economically devastating to Brassica crops after a lag time of 6 to 7 years following the first report of its occurrence in a region,” explained Christy Hoepting in a recent fast-paced, highly informative presentation at the Great Lakes Fruit and Vegetable Growers Convention. Although this insect can be difficult to spot, “You can assume that you either have swede midge, or that it’s only a matter of time until you get it if you are in the Northeast or Great Lakes regions. Economic damage can occur before you even realize it is on your farm.”

Hoepting has been studying these small insects for the past three years on seven small, at-risk organic farms in New York State, trying to understand why their behavior and population growth can vary on different farms and developing pragmatic management strategies.

Although the best management practices to disrupt the swede midge’s lifecycle, using a four-step strategy, are well defined, these are not completely hard and fast rules for every farm. Hoepting is searching for alternatives that can be used on small or organic farms.

Rotate your chemical classes. After no more than two consecutive applications, switch to another mode of action (ideally not the same mode of action used with your seedlings.)

“For organic growers, there is nothing that even begins to approach the efficiency of conventional insecticides,” stated Hoepting. Several OMRI approved insecticides have been tested at the Universities of Georgia, Guelph and Vermont. None showed complete or consistent control; maybe 50 percent control at best. But, as part of an IPM program, 50 percent control is quite helpful…Kaolyn clay, spinosad and azadirachtin showed the most potential. We noticed the OMRI approved insecticides worked better when they were used with a surfactant.” Hoepting is testing possible organic alternatives.

The “spring emergence sites” are quite predictable. In the fall, swede midge larvae on Brassicas drop to the ground to pupate. The next year, from May to about mid-July in New York, adults will be emerging from the previous year’s Brassica field, with trap catches as high as 500 adults per week. “Emergence times here in Michigan would probably be similar to those in New York,” said Hoepting.

This understanding of the swede midge life cycle has led to a helpful exception to the first rule, the long and wide rotations, for small farms where this is not possible. One of Hoepting’s small farms had experienced a total crop loss the previous year, after the grower planted cabbage in April too close to a known spring emergence site (at the other end of a 12-acre field). “The trap catches showed the swede midge adults had absolutely no difficulty at all in finding his new planting. The crop was not harvestable.”

In another field, the grower waited to plant Brassicas until late-July after the spring emergence period. By that time most of the adults had emerged and likely perished prior to finding a mate and a Brassica crop to lay eggs in their three-day life span. “He was able to harvest practically everything in the field.” By timing his planting after spring emergence, he didn’t even need to take his field out of Brassicas for a full year, let alone the recommended three years. On this farm, “the distance from field to field was only 400 to 500 feet. But the individual fields were isolated and surrounded by trees.” That has really worked as a barrier for the swede midge on that farm. Because the adults are weak fliers, the thick tall trees greatly hinder their ability to move from one field to another — an additional exception to the “long and wide rotations” rule that can work on some farms.

Insect exclusion netting also has a role. “We found that netting is 100 percent effective when used on ground that has been given a three-year rotation out of Brassicas.” Using netting in combination with mulch proved to be very important for weed control under the netting. Be aware that netting may have both beneficial and detrimental effects on other pests and crop quality. We found that netting also effectively controls flea beetles and imported cabbageworm,” unless, of course, transplants infested with worms were planted under the netting. Netting, especially when used in combination with mulch can produce microclimate differences, such as advancing plant growth in spring. Used without hoops, netting may create a great microclimate for slugs, which may seriously damage your crop.

Exclusion netting is also expensive and labor intensive, so it’s not for every grower and every Brassica crop. What Hoepting used had a cost of about $200 per hundred feet for the netting and then another $200 for the reusable hoops, rods and clamps. The question is whether the netting can be reused. It can get pretty beat up and weeds growing up through the edges can cause rips when you pull it up at the end of the season. But some growers have been able to reuse the netting.

There are also differences in attractiveness among Brassicas to swede midge. “In my experience, the most susceptible crop would be Red Russian kale, closely followed by broccoli, kohlrabi, Romanesco cauliflower and collards. On the flip side, Asian Brassicas such as Chinese cabbage, and turnips/radishes seem to be the least preferred. They have repeatedly withstood very high swede midge pressures.

“We were wondering if we could use the more susceptible Red Russian kale as a trap crop to keep swede midge out of broccoli. We’re not making any recommendations yet, but we’re very interested. We’ll also be looking at the feasibility of using ground covers, such as tarps, over ‘spring emergence’ areas that have been taken out of production. Will adults emerge under there and perish? I’ve also been working with Yolanda Chain and colleagues at the University of Guelph on pheromones for mating disruption, but nothing is ready for use at this time,” said Hoepting.

“I am optimistic about the future. The key to managing swede midge is to disrupt its life cycle, and there are many ways to do that. You need to figure out how the swede midge is functioning on your farm and then find an integrated approach that works for you.