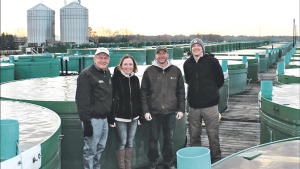 For over 60 years, the Swanson family business has thrived in western Michigan, becoming a go-to wholesale supplier of pickles. Able to count big names like the Kraft Heinz Company among its loyal customers, the Swanson Pickle Company continues to succeed and expand.

Founded in 1949 by Wesley Swanson, the company has benefitted from the services of the next three generations of his family. Wesley’s son Donald brought his sons John, David and Paul into the business in due time. John is the current company president while Dave works in scheduling, planning when growers may drop off cucumbers for processing. Donald, not one to take retirement too seriously, still toils away on the farm, typically seeing to the farm’s equipment.

Today, three of Wesley’s great-grandchildren, Wes, Matt and Katie, are working to continue the family tradition of excellence. Matt oversees growing operations, and Wes supervises the tank yard. Katie Hensley (née Swanson,) who graduated from Clemson University and received her MBA from IESE, an international business school in Barcelona, Spain, is the company’s chief financial officer.

“My great-grandfather was sort of a serial entrepreneur,” said Hensley. “He tried a little bit of everything. For a while, he met with some success with dry beans. But he decided that there was more potential in pickles.” Hensley laughed and added, “Everybody loves pickles. They’re the poor man’s caviar.”

Located in Ravenna, MI, the Swanson Pickle Company specializes in producing processed pickles for wholesale distribution. The company grows approximately 1,500 acres of cucumbers on its 2,800-acre farm per season, producing about 200 bushels of pickles per acre. The process of planting to harvesting takes about 50 days. The cucumbers are then placed in a solution of salt and water in large tanks, where they undergo fermentation. The Swansons have 1,374 tanks, each able to hold 905 bushels of cucumbers. This fermentation process can take from four to six weeks. Pickles are then removed from tanks and shipped to client companies across Michigan and Wisconsin. These client companies, including the Kraft Heinz Company in Holland, MI, and Bay Valley Foods (owned by Treehouse Foods), then use these pickles as the base for their various of pickle products.

Labor shortages remain an ever-present challenge throughout the farming industry. To date, the Swansons have not used seasonal labor through the H-2A visa program. The Swanson Pickle Company has about 20 full-time employees, but normally employs upwards of 70 during the peak of the season. Toward the close of the season, temporary workers are also needed in the tank yard.

“It’s difficult with an eleven-week season. We have a very short season,” Hensley said.

In order to meet their ever-changing worker need, the Swansons have improvised. In 2017, the company collaborated with a local apple producer to put his H-2A employees to work at Swanson Pickle until the apple crop ripened.

During the seasonal rush, a number of local applicants are welcomed into the fold. “We basically will give most people a shot,” Hensley said. “It’s common for families to have multiple members working there during the season.”

As the Swanson Pickle Company nears its 70th anniversary, the family’s newest generation continues to forge ahead, ensuring its continued success by combining the traditions and work ethic of the past with the technology and tools of the future.