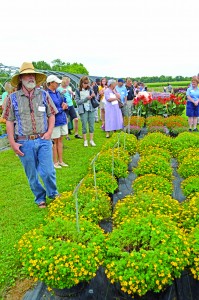 by Steve Wagner
At the 2013 edition of the Penn State Extension Flower Trial Field Day much of the setting was typical for the event, but there were also a few changes. The most notable change was inspired by an alteration to the road by which everyone accesses the extension grounds. The township had straightened the road during the past year, removing much greenery which, in turn, has allowed more of a potential carbon footprint for flowers that were closely approximated to that area. The plants formerly occupying that space in the lower acre, this year joined rows of flowers in the upper acreage.
The point man this year was Steve Bogash whose title for this event was Interim Trial Gardens Educator. Trial Evaluators were on hand again this year to explain to growers and greenhousers what they were seeing and what some of the pluses and minuses were for specific plants. Geraniums, for example, traditionally ne’er-do-wells on these grounds, this year proved to be a surprise for their hardiness, the best ever seen here according to a few veterans, and likely due to more than average rainfall. When I had a few minutes with Bogash, I asked him if these trials are a two-way street. In other words, do the seed companies and the university listen to wholesalers and retailers or is it a case of these entities saying ‘here’s what we’re offering; hope you like them’?
“Our goal here,” says Bogash, “is that growers will take back things that directly influence the profitability of their own operations. All of our surveys indicate that is exactly what happens. For the flower growers, they’re taking back improved varieties. There’s a lot of pull-through marketing that goes on. Look in all the magazines, even the homeowner magazines. They are constantly advertising new flower varieties. Here the growers actually get to come and see them, so they know what they’ll be selling next year which meets the needs of gardeners. All of our other programs meet very similar needs.”
Furthermore, he said, “We’re working on more and more new equipment. We’re taking direct problems from the growers and developing solutions for them. Maybe it won’t be their solution next year, but if they go to put up a new high tunnel, they are going to have in mind that ‘this is how I need to do it because that solves some problems that I’ve had in the past.’”
When I asked him the difference between the Penn State Trials and Cornell’s, he said it is probably not much. “This flower patch out here is the largest, most heavily visited flower patch east of the Mississippi and maybe even east of the Rockies. I know that because we’ve surveyed the growers who come here many many times. On the west coast they get to do the flower trials. They have the pack trials in the spring. This is it! I mean there’s a good program down in Georgia, but nothing at this level. This is the biggest, most attended flower trial.”
“There are quite a few growers who will come here, walk the trial and make their decision on what they’re going to carry from what they see here,” adds Andy Brown, chairman of the Floriculture Advisory Board. “It’s very important to the breeders. Not only are they looking at their own product, they’re looking at everybody else’s product and comparing them to their own. It’s definitely in the top two or three most influential trials in the country.”
This trial differs from Cornell in that Cornell plants are in the ground whereas the Penn State trial issues plants in containers. “We started many years ago being in the ground,” notes Brown, “but the ground is not the best here for geraniums, and we would run into issues with that. There were also disease issues, and it seemed to make more sense to go into containers. Also, so much of what’s being grown today is being grown by the consumer that this almost matches more what the consumer does.” Brown also says that it is up to the breeding company what they want to send, what they’re promoting, what they have that’s new, or what they want to show for any number of reasons.
“There are some really nice differences in flowering and flower power in the verbena,” proclaimed Trial Evaluator Rob Berghage, as the trial walking tour got underway. He footnoted that most flowers were in their usual holding pattern but that others were out of bloom. Despite continuing rainfall day after day, the wet and damp, he said, was more conducive to disease among the plants, but “it’s been a pretty good year for disease resistance.”