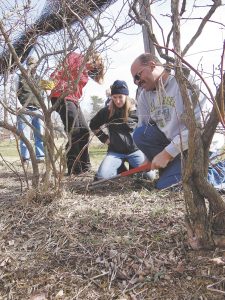 by Elizabeth A. Tomlin
Cornell Cooperative Extension’s Eastern NY Commercial Horticulture Program presented their 2016 Small Fruit Regional School / Berry Production Workshop, bringing producers the latest information on berry nutrition, varieties, pests, diseases and a ‘hands on’ pruning workshop.
Evaluating and perfecting soil health was one topic presented by Dr. Marvin Pritts, School of Integrative Plant Science, Cornell University.
Pritts said the concept of soil health is relatively new to berry growers. Healthy soils have high resistance to extreme weather events; show high populations of beneficial organisms, low populations of parasitic organisms and low plant disease.
Although traditional soil tests show nutrient levels, Pritts said there is more to it. “We want to look at the whole picture when we evaluate what is going on in the soil.”
In addition to important nutrient and chemical characteristics, biological and physical properties work together to ensure healthy soil.
New soil testing measures from Cornell identify 15 indicators of soil health, including measuring active bacteria and enzymes in the soil. “You can measure how much carbon dioxide comes out of that soil. The more you get determines how active the soil is.”
Pritt explained complexities in evaluating soil conditions and reported on farms that had their soil analyzed, with samples taken from unproductive areas and productive areas.
Older plantings showed poorer root health and the more cumulative years the site was planted in berries, the poorer the root health was. Soil compaction and clay soil showed poor root health. Raised beds tended to have healthier roots than flat beds.
Pritt remarked on one study “that came up a little surprising”. This study showed growers who using Terbicil / Sinbar herbicide had a correlation to poor root health. “It can compromise your roots.”
Pritt reported that growers using Metalaxyl (Ridomil, a systemic, benzenoid fungicide), tended to have healthier roots. However, he cautioned against overuse of fungicides. “The more growers fumigated, the poorer the root health was.” This seems to be because the good pathogens are wiped out as well as the bad.
Black root rot was one disease looked at in strawberries. Wet conditions spur this disease on and are detrimental to roots in any case, so, planting in raised beds with good drainage is advised.
Pritt said the soil-borne fungus Phytophthora, which has many strains, some showing resistance to fungicides, complicates diagnosing root disease. Phytophthora lives dormant in the soil and will resurface from year to year and can be detected in soil testing. Since most berry crops are perennials, it is critical to prepare the soil before planting, as treating problems after planting is extremely difficult.
Challenges in diagnosis and management due to genetic differences in tolerance and resistance vary in study results.
Strategies to promote root health include eliminating pathogens, preventing introduction of pathogens, preventing establishment of pathogens, managing the physical environment, managing the chemical environment and managing soil biology.
Pritt recommended using low tunnels to limit the spread of disease and improve overall productivity and to lengthen the season for fall production of strawberries.
For raspberries, Pritt does not recommend using straw mulch after the first year of planting, as it will hold in excessive moisture, creating an environment prone to disease. “Brambles love to be mulched in the first year. But then let the straw rot away and don’t re-straw.” He cautions growers to be extremely careful about using manure around plants for food safety reasons.
Although Pritts reported that added compost did more harm than good to plants, adding gypsum promoted excellent canes and productivity and seemed to prevent root rotting. However, overuse caused wilting.
He also cautions against using gypsum in blueberries. “Calcium can be very detrimental to blueberries!”
“Raspberry growers can use cover crops in several ways that will improve the health and productivity of a planting,” said Pritts. “Cover crops can be used before the raspberries are planted, plants can be set into a killed cover crop, and cover crops can be seeded between the rows of established plantings. In all three cases, cover crops help to improve soil structure and organic matter content, suppress weeds and possibly nematodes.”
Dr. Kerik Cox, Plant Pathology and Plant-Microbe Biology Section, School of Integrative Plant Science, Cornell University, spoke to attendees about identifying disease in berry crops. “Scouting is a little tricky,” said Cox. “By the time you see the symptoms, it is usually too late.” However, by scouting and discovering symptoms you can prevent spread of new infections and be better prepared for the following year. Cox recommends taking good photos of diseased plants and sending them to Cornell for help in identification and treatment.
Cox says when viral infections are the problem; you’ll need to “toss the plants — or the entire crop.”
Cox recommends low tunnels to protect berry crops and avoid air borne diseases and weather that will cause disease.
“Disease prevention is best achieved by careful planning of your berry operation and maintaining an optimal planting with appropriate horticultural practices,” commented Cox. “If the planting is adequately constructed and nutrition is good, chemical control will only be needed in emergencies beyond your control.”