2016 MOSES Organic Farmers of the Year – Pincus and Kazmar 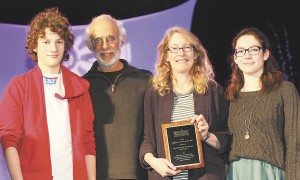 by Bill and Mary Weaver
Steve Pincus and Beth Kazmar, of Tipi Produce in Evansville, WI, were awarded the coveted “2016 MOSES Organic Farmers of the Year” award recently at the MOSES Organic Farming Conference in La Crosse, WI.
It has been a long road, but Pincus and Kazmar have met the requirements for this award many times over during their years of certified organic farming at Tipi Produce. Pincus has been farming organically for 40 years. A former urban dweller, he started growing produce in southwestern Wisconsin, then moved to farm 20 acres near Madison while he earned a degree in horticulture at UW Madison. He sold many of the vegetables grown there at the famed Dane County Farmers Market, the largest producer-only farmers market in the country. He met Kazmar, a plant pathology researcher at UW Madison, while earning his degree.
The two married in 1999 and bought their 76-acre farm not far from Madison in 2001. The farm was purchased from Amish farmers who had farmed conventionally for many years. Bringing the soil “back to life” was hard work. They began with the addition of huge piles of composted leaves, composted chicken manure, cover crops and green manures. Today their soil is high in organic matter, feeding the billions of beneficial organisms needed for a healthy soil.
Conventional growers might be hard pressed to make a living for a family of four on 45 tillable acres, but Tipi Produce, using organic methods, has also been able to provide above-average wages allowing them to retain experienced, dependable workers.
“We could not do what we do without our faithful employees,” stated Pincus. The operation hires about 23 workers, both full time and part time, at the height of the season.
While much of that labor is used for picking and packing, their third highest labor use is for weeding. While controlling weeds mechanically as much as possible with cultivation, they must ultimately resort to some time-consuming hand weeding, particularly with large plantings of closely- spaced root crops, such as carrots and parsnips.
To give his workers more months of income, Pincus deliberately increased his acreage of long-storing root crops, which he sells to several co-ops in Madison and Milwaukee, making truckload deliveries on a regular schedule straight through the winter and into April. This gives his employees additional work during what is normally the “off season,” in washing, grading and packing.
About half of the farm’s income is from wholesale vegetable sales. The other half comes from their 500+ member CSA. Kazmar is in charge of organizing and packing the 500 CSA boxes every week from May to November. Because their sandy soil warms earlier in the spring, Tipi Produce’s CSA usually begins about two weeks earlier than most in Wisconsin.
In addition to their commitment to organic soil building and to the wellbeing of their staff and customers, another reason Pincus and Kazmar were chosen for the 2016 Organic Farmer of the Year award was because of their dedication to mentoring the next generation of organic growers.Because of Tipi Produce’s commitment to paying above-average wages, many of their workers have stayed with them for multiple years — long enough to learn the principles of organic farming. A significant number have gone on to establish organic farms themselves. For Pincus this is “one of the proud legacies of our farm.“
Kazmar and Pincus have also been dedicated to educating other growers about organic methods, through field days held at their farm and conference presentations, both at MOSES and at other conferences, including several years at the Illinois Specialty Growers Conference. Pincus’ sessions have generally stressed growing and the use of appropriate machinery aspects of organic farming, while Kazmar’s presentations have tended to focus on organic disease controls using mild, natural methods.
They have also conducted many research projects on their farm in cooperation with University of Wisconsin researchers.
The Organic Farmer of the Year is a project of MOSES, (Midwestern Organic and Sustainable Education Services), that promotes organic and sustainable agriculture with education, resources, and practical advice. For more information on establishing organic methods, please see http://mosesorganic.org .