A battle against spotted wing drosophila 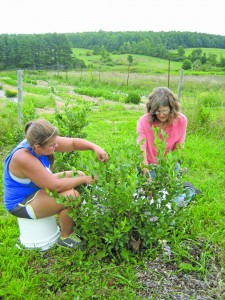 by Sally Colby
Grower Lawrie Nickerson is fighting a battle — the same as many others who grow soft-skinned fruits.
The battle is against the spotted wing drosophila (SWD), an Asian invasive that quickly spread to the East Coast. Although Nickerson is vigilant about watching for signs of the insect, her challenge is somewhat more difficult because she’s an organic grower.
The SWD doesn’t bother Nickerson’s other crops, which include U-pick herbs, lavender and a variety of flowers for fresh use and drying.
A background in landscaping has helped Nickerson develop her Hay Berry Farm in Hoosick Falls, NY. “I realized that to have a landscape that works for someone, we need to understand the soil and microclimate, and know how that plant is going to grow in that situation,” she said. “Does the customer want a hemlock next to the house that has to be pruned constantly, or something that grows naturally to a low-maintenance size?”
Rather than going through the process of becoming certified organic, Nickerson farms under the guidelines of Farmer’s Pledge™. “The paperwork for certified organic was more than I wanted to deal with, but Farmer’s Pledge goes along with my philosophy about growing,” she said. “The Northeast Organic Farming Association of New York (NOFA) lists certified organic growers as well as Farmer’s Pledge growers.”
Farmer’s Pledge describes sustainable practices that help consumers understand how food is being grown. The document includes a pledge to build and maintain healthy soils by employing farming practices that include creating beneficial habitat for wildlife, rotating crops annually, reducing tillage and using compost, cover crops and green manure. “People are open to come to the farm, by appointment, for a tour and to find out about that farm’s growing practices,” said Nickerson. “They know we are organic, sustainable and farm without toxins. Most people don’t want any more information.”
Nickerson says the key to growing pumpkins organically is crop rotation and site selection (well-drained fields) to prevent mildew. To deal with bird damage, she uses row covers until plants have flowered. Some of the fields on the farm are used for hay, which is primarily a fine, wire-type grass. This hay is used to mulch between rows, and Nickerson is considering planting directly into the hay next year.
Hay Berry Farm is situated on a sloped area with well-drained gravelly loam, which is ideal for blueberries. Plants are established with drip irrigation, and fertigated with organic fish and seaweed.
When Nickerson learned that SWD had arrived in her area, she changed her planting schedule. “We pushed early with the lavender and flowers because the SWD was coming,” said Nickerson. “We stopped planting blueberries and started planting flowers.”
Laura McDermott, regional agricultural specialist with Cornell University, says there might be some hope for growers battling SWD. McDermott helped Nickerson write a SARE (Sustainable Agriculture and Research Education) grant with fellow berry farmer Dale Riggs that would allow them to purchase and test insect netting on blueberries.
“Thrips are about the same size as drosophila,” said McDermott. “The netting used in the trial has been used by vegetable growers to ward off damage by thrips and other insects. The netting is the result of a Japanese study — a Japanese student at Cornell helped us translate the paper.”
Growers who have smaller plantings that are grouped by variety and bearing time are best able to use netting. McDermott says the netting is very durable and will last at least 10 to 12 years if it’s cared for properly.
“Because organic insecticides are less effective, growers could potentially end up applying more material than a conventional grower,” said McDermott. “The cost to control this insect through spraying could be twice as much as a conventional grower. An organic grower can justify the expense of the net.”
Although the trial showed that netting was effective in keeping SWD out, using it will be a challenge for U-pick because there’s no ‘doorway’. Another difficulty with the netting is that it is currently only available in one width, and sections must be sewn together to cover a planting.
“It should work for small plantings, but a lot more work has to be done for large plantings,” said McDermott. “We’ve had a few issues with wind — it’s such a dense weave that wind doesn’t pass through easily. If the wind catches it, it acts as a large sail.”
Nickerson grows eight blueberry varieties including late-season bearers Nelson and Elliot.
Varieties are grouped according to when each will ripen, so all of the late-season plantings are together. “All of the late-season varieties are still young,” she said. “Next year would be the first year for a harvest. They’re just about the right age for me to justify the expense (of insect netting). We can group the eight rows and efficiently cover a large section of the field with insect netting, and use bird netting on early and mid-season varieties.”
This year, Nickerson stripped the berries to ensure no fruit was available for SWD. “We didn’t really lose anything because we were planning on the first harvest next year,” she said. “We like them to simply grow for the first two years.”
Last year, Nickerson found that her blueberry season was nearly over just as the SWD was seen in the area. “The netting was expensive and heavy, but it worked,” she said. “I’m a U-pick place, so we can’t have a little claustrophobic tunnel for people to walk in. I need a structure large enough to hold the net and so that people will have a pleasant experience.”