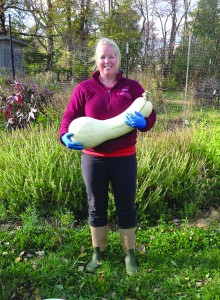 by Emily Enger
Not every story has a happy ending.
Courtney Smith is the owner of Flora Bay Farm in Carbondale, IL. In 2012, she was working fulltime as a graphic designer. Her dream, though, was to start her own farm. She’d already joined and graduated from a farm mentorship program and she and boyfriend Steve Sawyer were well into saving for their first farm.
One day, a surprising call came in from her former farm mentor: the woman wanted Smith to manage her farm while she was away at graduate school. “It was a shock,” Smith recalled. “But I also felt excited. I thought, ‘this is a good experience for me. I can start farming earlier.’ I wanted to start farming so bad!”
The agreement was that Smith would pay a renter’s fee and keep the balance of the farm’s profits. When pay was discussed, Smith was shown the farm’s finances, all of which were a few years old at the time.
Smith and Sawyer moved into the mentor’s house, even though they owned their own place in town at the time. “It’s easier to run a farm if you’re there all the time,” Smith explained. “Especially with Steve and I both still working fulltime jobs. We farmed before work, after work, with flashlights…all that stuff!”
Before they moved in, Smith and Sawyer were provided with a lease. But it wasn’t a lease specific for the farm; it was just a basic home renter’s lease: don’t put any holes in the wall, don’t change any part of the house, those kinds of stipulations.
The farm wasn’t mentioned at all, nor was farm equipment or farm workers. “That should have been a red flag,” Smith admits.
And it was a red flag. Sawyer was uncomfortable signing the vague lease and requested it be changed. They did not sign but still moved to the property with only a verbal agreement.
It didn’t take long for Smith to calculate that the farm’s current profits were not coming close to what they’d been originally shown. “The amount of money she wanted us to pay her every month, and the amount of money that was left over wasn’t close. We’re talking $1,000 less than what we were expecting to have each month.”
Smith and her mentor met several times over the season. They also corresponded via email and phone. When Smith questioned her about the money issue, the mentor’s response was always the same: don’t worry about it; we’ll work it out; it’ll be fine. “So we paid her every month what we had left over from the farm. A couple months we made enough to pay in full, but with no money left over. Basically, we were working for free. But some months, we only had a quarter of the income she was expecting. But we still sent it in, cause we realized we were living in her house and looked at that as a rent fee.”
Besides the money issues, the whole experience proved to have an abundance of problems. Some hired hands stopped working, feeling that without their boss present, they didn’t need to show up. Equipment broke down and since there was no money to fix it, Smith got a family member to repair it free of charge. A tree collapsed on the house, which led to roof and water damage. “Things went downhill pretty quickly,” said Smith.
That fall, an opportunity to buy a farm fell into Smith’s lap. She took her business plan to the bank and was approved for a loan. She and Sawyer bought their first farm, but they wanted to finish out the season and fulfill their commitment at the leased property, so they stayed on until the next spring.
“Our supposed, verbal lease agreement was that we’d stay till May,” said Smith. “But with things going so sour, we left in April, so my mentor would have time to rent out the house, since she’d decided by this point that she wasn’t going to farm anymore.”
Finally, when they vacated and moved to their own place, they sent the mentor a letter. In it, they documented what had happened throughout the summer and what expenses they’d incurred. “We did it hoping to salvage whatever was left of the relationship, just to lay out what had happened from our point of view,” said Smith.
The letter was ignored. They never heard back at all, but instead learned from mutual friends that the mentor was publicly bad mouthing them. It hurt, but life went on. “I had a bitter taste in my mouth, but things happen,” said Smith. “We started our own farm and moved on. We thought everything was over.”
Then that fall, Smith received a subpoena. Her former mentor wanted back-due rent to the tune of $9,000. “We had not paid her through the winter months, because the farm had no income,” Smith explained. “She wanted that rent.”
Smith looked around for a local lawyer, but no one wanted the case. While $9,000 was a great sum to Smith, the percentage a lawyer would take away was not enough for any to be interested. And there was no legal contract or lease to use in court. In the end, Smith settled out of court for a smaller amount.
She and Sawyer are now in their first year running their own farm. Smith learned many things from the experience and hopes others can see her story as a cautionary tale. “Don’t enter into any verbal agreements with anyone, regarding any sort of farming,” she said. “Don’t enter into any sort of contract without first consulting a lawyer.”
In the end, it wasn’t about the difficult experience or the money. “The hardest part was losing a friend, my mentor, over this deal.”