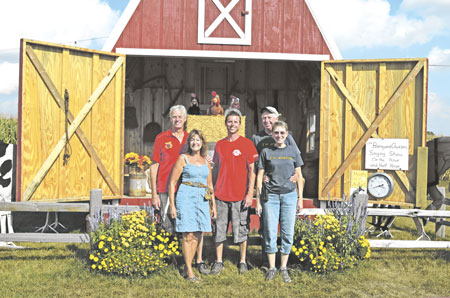 Each farm has a unique flavor and strength. Farms all across the United States provide many of our food staples and some farms develop unique ways to provide creative expressions of agriculture. The Richardson story is an example of this.

Now standing as a 500-acre farm, its beginnings were as a humble pig farm. Richardson’s Farm is located in Spring Grove, IL, and it has morphed primarily into an agritourist farm. People now come to the farm to have fun in autumn, or to buy a Christmas tree in December. In September and October 80,000 people flock in to visit the Adventure Farm, home of the “World’s Largest” corn maze. In addition, a one of a kind pumpkin farm is also enjoyed by many.

How did this all begin and grow to such an extent? In the words of George Richardson, it has been “fun, enjoyable and educational.” He and his brother Richard graduated from the University of Illinois with degrees outside of farming. Travelling long hours and being away from home when children began coming along made things difficult and the brothers then decided to purchase a 500-acre farm in the late 1970s. They began to produce corn, pigs and cattle. The focus was on pigs and they began with 3,000 pigs from birth to market each year.

The wisdom of George’s father caught his ear when he advised planting Christmas trees. George and his brother planted Christmas tree seedlings in 1981 as a side hobby. The first year was a disaster. Then they joined the National Christmas Tree organization and learned how to do things correctly. One thing the Richardson brothers realized early on was that they liked talking with people a lot more than talking with pigs. This was their first step in discovering their niche and the aspect of agriculture George Richardson and family found enjoyable.

With just a sign on the road in 1986, they sold 188 Christmas trees. They welcomed customers in and offered them hot chocolate and their grandmother’s homemade cookies. The people loved it and the Richardsons saw it as great fun. The trees grew in production with differing varieties and shapes, and at this point they were raising the pigs as well.

In 2001 the Richardsons realized, after 22 years in the pig business, that they should quit raising pigs. The hog market had crashed in 1998 to an all-time low, and they hadn’t been able to recover much. George read about corn mazes and how they might be a good alternate source of income. He learned how to build and market a maze. He didn’t know if it would make any money, but they thought it was worth a try. There was a risk, yet it was necessary to find a replacement for the income from the pigs. Those years were very lean, George recalled.

The first year 25,000 people came to the maze. The Richardsons then decided to open it at night as well and made available campfire areas and picnic tables. They put in a lot of effort to get the word out by publishing 25 press releases each week as well as producing radio and billboard ads. The intricate pattern of the corn maze had an additional perk because they were able to photograph it well aerially. This was made possible due to the fact that both of the Richardson brothers had pilots’ licenses. These aerial photos were also sent to the press. That first year the corn maze was 18 acres. Their available corn crop was diminished some due to the trails, but 75 percent was still available to be harvested.

After four years some problems developed, however. The mazes were also open at night for teens and adults, and at times the evening customers would get silly and throw corn. An ear of corn can produce a hefty blow to someone, especially if hit in the face. After some deliberation the Richardsons changed the corn in the maze to sterile corn, which has pollen on top and is lightweight and fluffy, producing no injury if thrown. Twenty-eight acres of sterile corn were planted; they stopped the corn crop and it became a maze entirely. They designed the mazes with no dead ends and they have a 50-foot tall lighted observation tower at the entrance so nobody gets lost. Everyone gets a map with 24 checkpoints marked. This corn maze is now the world’s largest.

Another unique feature of the Richardson farm is their pumpkins – more than 40 varieties of pumpkins. The crowds love them and because of the welcoming fun feel of the farm, they always come back. The farm has beautiful facilities including doughnut kitchens, tractor rides, furnished lavatories (which they recently invested $100,000 in to improve) and pavilions.

The Richardsons have made a complete transition into the world of agritourism. They found people are willing to pay for an experience that is exciting, welcoming and fun.

Outside of the maze, the Christmas trees and the pumpkins, there are over 30 activities available on the farm including slides, pedal carts, a tracked train ride, jumping pillows, a 30-horse carousel, pig races and other animals to view. For an additional charge, they offer a 650-foot-long zipline, Zorbing (rolling down a hill inside an 11-foot diameter ball), a paintball shooting gallery and complete concessions (including fudge, kettle corn, caramel corn and more). There is also live music on Saturday and Sunday afternoons and they sell beer and wine also. Adjacent to the corn maze grounds there are 100 private wooded campfire/picnic sites available for groups to rent for the afternoon or evening.

Farming is a family affair and each farm can determine how far they are willing to go to expand their borders and make it an enhancing experience for the community. George Richardson claims providing a welcoming aspect was key to his development and that there is endless potential for each farm.

Starting with an honest, hardworking pig farm, the Richardsons’ farm grew slowly and carefully. George Richardson knows that how people perceive your farm and the feeling it gives them is central in directing growth. The Richardsons did not set out intending to have the world’s largest corn maze but they were willing to try new things and discover what suited them. “Each farm has its own flavor and strength and can potentially develop some type of niche, providing more income to the farmer and bringing appreciation to their communities,” said George Richardson.