A grocery store for plants 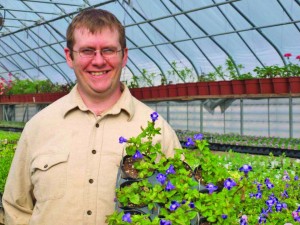 by Kelly Gates
A little more than five years ago, Ben and Amy Lindner had no idea that they would soon build, own and operate a new growing business. The couple had just married and was living in Maryland where Ben enjoyed a new job at a landscape maintenance company.
But when Ben’s parents called and told him about their plans to discontinue their Greenwood, WI dairy farm, his family’s future suddenly shifted.
“My parents’ farm was part of a CWT program that monitors the number of dairy cows across the country to ensure that there are never too many herds producing milk.” Ben explained. “My parents were able to sell their dairy cows through the CWT program and look for a new use for their farm.”
After considering a number of options, the Lindners settled on greenhouse and PYO-produce growing for new use for the property. They researched retail and wholesale greenhouse businesses, comparing the pros and cons of each. Ultimately, they selected retail for their company.
They also looked into the various types of plant material that sold well in the Midwest and took the time to choose just the right produce for a future PYO division.
“The greenhouses we built in the first year for our company, Tender Shoots, were two 30 ft. X 96 ft. gutter connect poly houses that add up to nearly 6,000 sq. ft.,” said Ben. “We poured smooth concrete floors with in-floor heating so we could heat year round. We put a lot of thought into the aisles between the plants too, making them four feet wide so our customers could move around comfortably.”
The aim was to make the space feel open and easily maneuverable, “like a grocery store for plants,” he added.
A wood-burning stove was installed, making warming the water for the in-floor heating system simple and cost effective. Then the family built an assortment of benches that are now used to display the annuals, perennials and houseplants sold at Tender Shoots.
“We offer a range of 600 varieties of annuals and perennials, planting at least 150,000 seeds per year as our main crop, with 30,000 cuttings and 5,000 plugs too,” noted Ben. “We haven’t gotten into shrubs and trees yet since we are still working on building the foundation of the company, but we hope to expand into other plant material like that in the future.”
Outdoors, the PYO produce section includes a small apple orchard, 400 blueberry bushes and approximately 300 ft. of raspberries. Because this section was just planted a few years ago, Ben and his wife Amy do not expect to open it to the public until at least 2015.
In the meantime, the family is focused on its springtime rush of customers who are typically searching for flowers for their landscapes, and the fall crowds that come to wander through the five-acre corn maze.
“We have seven wooden cutouts scattered throughout the maze,” said Ben. “Since most people have cameras in their phones or bring digital cameras to take pictures while at our site, we decided to make a photo scavenger hunt. Anyone who finds and takes photos of themselves at at least six of the seven cutouts can show them to an employee in our gift shop and get a prize.”
The gift shop is well stocked with all sorts of goodies. Tender Shoots sells everything from home décor to locally made, wooden craft items and local wines.
The company specializes in daylilies and hostas in the summer, with 15,000 lily plants and 15,000 hosta plants grown on site annually. In the fall, mums are the main hit there.
At Christmas time, people can purchase fraser and balsum firs, wreaths, garlands and a wide array of Christmas ornaments and decorations.
With so many offerings, it’s hard to believe it has only been a few years since Tender Shoots was started. But the Lindners have barely begun building the business they envision. Ben has plans for the 100-year old barn on the property. He also knows what he will do with the farm’s old manure pit.
“The barn is not really in good enough condition to use or restore. The cement foundation is cracked and the ceiling on the lower level is too short, but I hope to rebuild a new barn using most of the peg mortise and tenon beams in the existing barn for aesthetic appeal,” he said. “We hope to use the space for weddings and other events.”
The manure pit had to be completely stripped down to the clay in the ground to meet mandatory environmental guidelines. But the shape is still there and the Lindners will eventually plant perennials, trees, shrubs and annuals in the hole, creating a sunken garden that doubles as a showcase for many of the plants sold at Tender Shoots.
“When I was in college, I took a greenhouse management class and was taught to always leave room for expansion or things could get really expensive,” he said. “So we spent a lot of time planning how we would use the entire site before we did anything. Because of that planning, we have the room to add another five greenhouses and all of the other things we would need to create a well rounded agritourism business.”