A look at Rhizosphaera needlecast 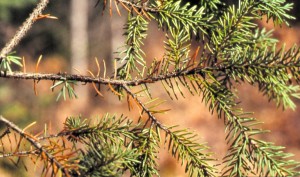 by Emily Enger
Rhizosphaera needlecast is not an unfamiliar term to Christmas tree farmers. The disease, caused by the fungus Rhizosphaera kalkhoffii, causes trees to lose their needles from the inner branches, outward, making the infected tree look almost hollow. And the spread of the fungus appears to be increasing.
While no known data has been accumulated to prove this increase, complaints from tree farmers throughout the country concur. And it’s not just at a commercial level; DNR websites and resources mention an increase in homeowner complaints regarding the Rhizosphaera needlecast as well, compiled over the past decade. Lately, it’s become almost a bad word, as its effect on trees continues to grow out of hand and tree farmers struggle to keep up.

“It’s definitely a concern today,” said Matthew Russell.
Russell is an Extension specialist with the Department of Forest Resources in Minnesota. Through his work, Russell has not only noticed the fungus’ action, but also the one place it appears inactive. “It’s not really apparent in our forests,” he said. “It’s mostly the tree farms where the fungus is growing.”
The reason for this is most likely due to tree diversity. Rhizosphaera targets primarily Colorado Blue Spruce and sometimes Norway Spruce — two of the most popular varieties of Christmas trees. And with the species planted in fields, often such population serves as a breeding ground, allowing the fungus to jump from one host to another.
“A lot of Christmas tree farmers do have multiple species they grow,” said Russell. “But forests also have trees from different families, like birch or oak, to prevent the fungus from spreading.”
Of course, tree farmers don’t have the luxury of such diversity, so a common preventative measure is simply space. “If trees are planted really close,” said Russell. “Then they’re more apt to get a disease because there’s not a lot of aeration. So make sure the density isn’t too much when planting.”
The best prevention is simply a healthy plant site and a well-kept, healthy tree. “Keep making sure that you’re planting on the right site,” said Russell. “Make sure you have the right soil and are watering affectively. Mulching helps, too. Whatever will make a more vigorous tree. A fungus would not affect a vigorous tree as much as it would a smaller, weaker one.”
And certainly treating infected trees is important and helps prevent the fungus from spreading. “Rhizosphaera needlecast is manageable,” said Russell. “Over-the-counter fungicides can be applied a few times throughout the year.”
The Wisconsin Horticulture Extension recommends using fungicides that contain copper or chlorothalonil when treating trees for Rhizosphaera needlecast. Using different fungicides alternately is recommended in order to prevent fungicide-resistant strains from creating.
The best thing tree farmers can do is simply keep up their sites and watch carefully. Many farmers are looking at the difficult choice of halting plantings of Colorado Blue Spruce. While the tree is a Christmas favorite for customers, it may not be worth the effort in the long run. With that specific variety, the favorite host of Rhizosphaera kalkhoffii, out of the field, the spread of the fungus could very likely decrease.
Whether or not the disease is getting worse is hard to pinpoint. It thrives in wet weather. With the last few winters being particularly brutal, followed by wet springs, the concept of it increasing is not out of the realm of scientific possibility. “Certainly, it’s a concern to watch carefully,” said Russell.