A new look at pears 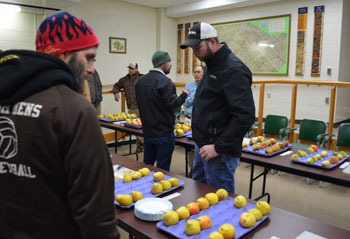 Grower Bruce Hollabaugh started testing pear varieties in 2011, including Harrow Delight and Harrow Sweet. “Harrow Sweet in particular seems too good to be true,” he said.

Dr. Jim Schupp, researcher at Penn State’s Fruit Research and Education Center in Biglerville, PA, said pear production outside of the Northwest U.S. is not as extensive as it could be, and part of the reason is fire blight. Schupp has been involved in a project that offers options for combining fire blight resistant varieties and fire blight resistant rootstocks that greatly reduce the risks of tree death due to Erwinia amylovora.

“Pears are a good fit in that setting,” said Schupp, commenting on the markets for pears. “We aren’t just trying to create opportunities for wholesale growers. If we get some good pears that will live, it will benefit more than one segment of the industry.”

Schupp said one benefit of adding pears to the tree fruit lineup is the lengthy season, which can begin with an early variety like Sunrise, that is ready in early August, followed by varieties that ripen until the middle to end of October.

“We have to reintroduce pears to consumers again because people got used to seeing Bartlett, D’Anjou and Bosc at the supermarket,” said Schupp. “The pears you get at the supermarket are picked when green, so the consumer has to know that pears they purchase have to ripen for several days before reaching their peak.”

Schupp noted many varieties of pears are picked green because they tend to ripen unevenly. “That ‘unevenly’ is two different ways,” he said. “They ripen a few pears at a time on the tree so some pears are turning ripe and others are green as grass. The other form of uneven ripening is more problematic. As an individual pear ripens, it ripens from the inside out. The areas around the core can become over-mature, and that will be soft and mushy when the exterior, which is what we’re looking at to make a judgement, is finally just hitting its peak.”

Schupp added that while Bartlett is the number one pear, it’s also the poster child for both aspects of uneven ripening. “As a grower, you have to go pick that pear at ‘green mature’ stage, and nowhere ready to eat,” he said. “But if you pick it at that stage and put it in cold storage, removing it from the tree and chilling it seems to largely overcome both of those uneven ripening issues. Then, if you want to offer pears to sell, you can bring them out as needed, and they would ripen more evenly both within and without.”

However, many of the new fire blight resistant pear varieties ripen differently. “One that’s been very popular is Harrow Sweet, which is a much better pear if it turns yellow on the tree,” said Schupp. “For a Bartlett, that would be a disaster, but that’s what Harrow Sweet needs.” 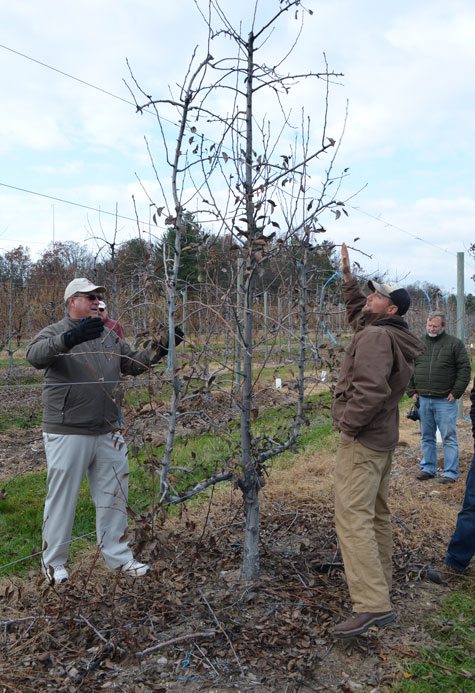 The pruning crew at Hollabaugh Orchard are tending to a tree that needs removal due to fire blight, a major issue for pear growers.
Photos by Sally Colby

Schupp’s project involves European pears, which he said have been the focus of an effort to develop fire blight resistance. “USDA has had an ongoing program to develop fire blight resistant pears so pears could be grown in a wider geographic distribution,” he said. “Commercial scale pear production is limited to the Pacific Northwest and California, but they’re growing pears in the desert and don’t have a problem with bacterial diseases like fire blight. Their biggest problem is water, but water can be delivered under the tree. If we’re going to grow pears here, they should be lower risk. Fire blight is a huge risk factor, but we now have some genetics to address that.”

Those growing other tree fruit species already have equipment that’s compatible for use with pears. “Hopefully, we will identify pear root stock with more size control,” said Schupp, “but we don’t have that now, especially when we add the need for fire blight resistance. First we have to know whether the tree will live, then think about how big it will get.”

Third-generation fruit grower Bruce Hollabaugh manages the production side of his family’s orchard. “Pears are a very important part of marketing at Hollabaugh Brothers,” he said. “We market a lot of pear retail, and also wholesale to other farmers markets and growers who sell pears. We also sell pears to a local grocery chain that works hard to promote them.”

Hollabaugh said the challenges in growing pears is lack of productivity, fire blight, pear psylla and the lack of good nursery stock. “We believe that a broad-spectrum approach to pear varieties is the key,” he said. “It’s important to spread the season.”

Hollabaugh started testing pear varieties in 2011, including Harrow Delight and Harrow Sweet. “Harrow Sweet in particular seems too good to be true,” he said. “It crops every year, fruit is large and absolutely gorgeous and the flavor is better than any other pear we grow. It’s hard to get off the tree – unlike most pears, it doesn’t fall on the ground. We struggle with getting it harvested without pulling the tops out of them.”

Most rootstock at Hollabaugh Orchards is Pyro 233 or OHxF 87, but Hollabaugh would like to see rootstock with more dwarfing capability. “It has far more power than I’d like to see in rootstock,” he said, “especially for most pear varieties. But with the exception of quince rootstock, it’s the only thing out there.”

Schupp said most peoples’ exposure to pears is through the grocery store, where the options are usually Bosc, Bartlett and D’Anjou. Some consumers will be happy with those, but others will eagerly purchase new options. “These new pears have excellent flavor, but now customers have to accept them,” he said. “It’s nice when pears have internal beauty and when you cut, smell and taste it, it gets more beautiful. That’s total success.”