A pumpkin patch and so much more 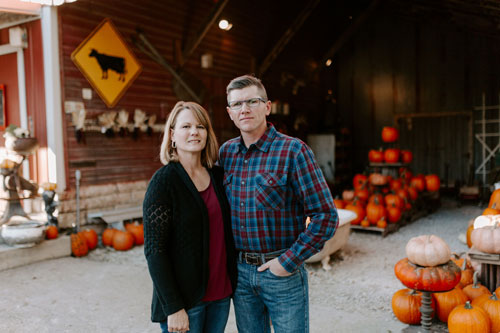 Farmers are slaves to their seasons. They have to fit an entire year’s worth of work into a time period that is, more often than not, considerably less than a calendar year. If you ask a farmer about her season, you’ll likely get a very wordy and thoughtful answer.

And then there’s Teresa Lorensen, owner and operator of Bloom Pumpkin Patch in Avoca, NE. Ask her about her season, and her response is likely to be “Which one?”

That’s because Bloom Pumpkin Patch has grown by leaps and bounds since it first opened in 2005. It is now is a multifaceted farm, featuring its original pumpkin patch, a vintage marketplace, a café and myriad agritourism events that each operate within their own respective seasons. “We’re quite busy,” Lorensen laughed.

A native of the Cornhusker State, Lorensen grew up on a farm. “My grandparents were farmers,” she said. “They first opened their own place in 1944.” After graduating from Weeping Willow High School, where she met her husband Terry, Lorensen studied business and tourism at the University of Nebraska at Lincoln. These studies served her well, as the field of agritourism has grown substantially in recent years. “People really do enjoy coming … being our guests and learning about what we do,” she said.

Nearly 15 years ago, Lorensen started operating Bloom Pumpkin Patch on 12 acres of farmland. “Our first focus was obviously the pumpkin patch, though it’s not just pumpkins. We also have squash and decorative gourds. That basically has a six-week season. We start toward the end of September and go on through Halloween,” she explained. 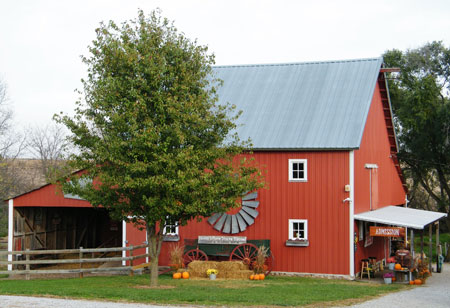 This dovetails nicely with her agritourism offerings, as their seasons overlap. “We have hayrides, family friendly pumpkin pickings, a petting zoo and a half-mile scenic walking trail through the fields down to the creek,” Lorensen said. “Our campfire parties are also very popular. Groups can rent out the entire facility after 6 p.m. for several hours. We have nighttime hayrides, a big campfire and people can roast marshmallows and hot dogs. Another guest favorite is our authentic one-room schoolhouse. It’s from the late 19th century, and is actually the very same schoolhouse my mother attended a few miles down the road. We had it restored and moved here in 2008.” Most of the agritourism season extends from late summer through October.

At the Bloom Pumpkin Patch Cafe, which operates out of the old schoolhouse, guests can partake in a plethora of palatable possibilities. “The café has done well,” Lorensen said. “It now brings in about 10% of our total fall revenue.”

A huge boon to the farm has been the success of its vintage marketplace. This is a new initiative of Lorensen’s, barely a year old. Housed in the property’s two-story barn, originally built in the 1890s and recently restored, the vintage marketplace hosts a one-of-a-kind store featuring farm-related antiques, authentic 19th century cream cans, wagon wheels, furniture and more. The adjacent lean-to is filled with pre-picked pumpkins, squash, gourds, straw, corn shocks and other decorations. The vintage marketplace has been so popular, it now accounts for 50% of the entire farm’s annual revenue, and Lorensen had to create a separate website dedicated to the marketplace alone. The marketplace operates year-round.

Helping her juggle these multiple programs and their various seasons is a staff of about eight seasonal part-time workers. “They really help out with things like the café and the schoolhouse,” Lorensen said.

As for the future, Bloom Pumpkin Patch is looking to break into the wedding venue market. Its picturesque setting provides a photographer with countless possibilities.

They are quite busy indeed.