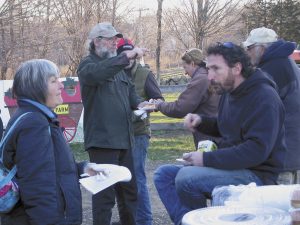 by Kristen M. Castrataro
The Rhode Island Fruit Growers’ Association met at Salisbury Farm in Johnston, RI in April for a Small Fruit Twilight Meeting. Owner Wayne Salisbury who is also the Vice-President of the RI Farm Bureau, began the evening with a spirited tour of his farm. Participants were treated to dinner provided by Phantom Farms located in Cumberland, RI and a talk on pruning brambles by Nate Nourse of Nourse Farms in Whately, MA.
Salisbury farm was established in 1840, and in 1860 the current post and beam barn was built out of chestnut.
Early in Wayne’s tenure, the farm produced hay for a few years until his son, Stephen, decided to plant 500 strawberry plants as a school project. The following year he planted 1,000 plants. Year three he talked his father into 10,000 — and promptly left the farm. Strawberries have become a staple on the farm, and the Salisbury’s plant 8-15,000 every year.
Raspberries, however, were the real focus of the evening. The Salisburys have a unique method for pruning their brambles: they mow them each fall with a mower-conditioner. Thus far they haven’t noticed a problem with disease.
One pest they have contended with is the Spotted Wing Drosophila (SWD). Two years ago they experienced an infestation that even their rigorous organic spray program could not defeat. University of Rhode Island Entomologist Heather Faubert recommended that growers educate their PYO customers to minimize SWD-related complaints. Customers should be sure to pick firm berries. If there is liquid in the bottom of the picking bucket, they should discard the berries. Finally, berries should be eaten or processed within a day or two.
Like many New England farms, Salisbury Farm is a model of diversification. Wayne’s son Keith keeps an apiary in the center of their petting zoo. Wayne’s grandson Justin runs a wood business. Additionally, the farm boasts of having the first corn maze in Rhode Island. Of they’re nearly two decades running the maze Wayne remarks, “It’s been a great thing for us. The first year we opened up it was absolutely nuts because we were the only show in town.”
After the tour, attendees moved into the barn for a presentation by Nate Nourse on his novel approach to pruning raspberries and blackberries. Like many innovations, this was born of a “mistake.” One fall they topped their black raspberries to encourage earlier crops in the spring. That year saw temperatures in the teens — and the Nourses harvested a 90 percent crop. They had discovered that fall topping provided an extra layer of cold hardiness.
Nourse has also become a fan of permanent trellising. He uses branch locks to attach the primocanes to the outside of the trellis wires. This makes it easy to trellis and easy to remove pruned canes. Height is critical: every additional foot provides additional production. For blackberries, he has had great success with the swing-arm trellis, citing superior overwintering (90 percent crop production in the past two years compared to 50 percent for his neighbors) and yield increases of 30-40 percent.
This system does not work without vigorous pruning, however. Each spring he thins to 6-8 canes per foot (four canes for some varieties). Summer-producing canes are removed immediately after harvest. Every fall he tops the primocanes at around six feet. Nourse notes: “Pruning is an investment. The timing is really key to the efficiency.”
The payoff for pruning is reduced SWD habitat, better spray coverage, increased cold hardiness, increased yield, and reduced management time. In summarizing his management plan, Nourse notes: “The whole premise is having a bigger, healthier cane that’s not competing with all the other canes.”
The annual small fruit meeting is a new addition to the RI Fruit Growers’ Twilight Meeting schedule, but useful presentations like this one ensure they will become a regular feature.