A thriving destination with “a little outpost” 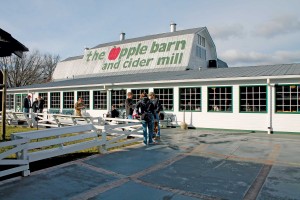 by Branden Jaquays
When Kent Kilpatrick’s father Bill invested in an old beef cattle and tobacco operation back in the early 70’s, the idea was to make some money by dividing the land and selling off all but one or two of the parcels. “It was just a 62-acre farm with a nice hillside and a farmhouse on the river,” says Kent. Back then, the farm, which is located in Sevierville, TN was just about as rural as it gets.
Nearly three decades later, The Apple Barn Cider Mill & General Store is a thriving “everything-apple” destination, featuring a restaurant, farmhouse grill, cider room, winery, creamery, candy factory and general store. The Kirkpatricks began reinvesting in the property by learning how to market their venture, planting more apple trees and diversifying the products they sell. They began a year-round operation in 1987. “The critical thing that dad has taught us is slow growth”, Kent explained to a small group of NAFDMA members during a tour stop this past February. “We don’t want to grow so much that you feel like you’re in a retail mall.”
Aside from the picturesque hillside landscape, the Little Pigeon River also runs through the property. Kent says they thought about putting in a small structure to sell fishing items a few years ago, “a little outpost” where they would sell some fishing equipment. Kent, smiling as he tells the story, says the folks from Orvis®, a family-owned, high-end fishing and sporting goods company with about 70 stores in both America and the United Kingdom, “wanted to see the property.”
After a short visit, Kent said they had a lease drawn up before they left. Instead of a small shack on a small river, Orvis moved into a newly constructed 14,000 square feet retail space that’s tucked away from the other parts of the apple operation’s retail area. “It really put us on the map, as it’s a national brand.”
Today, the property that was once a quiet, rural countryside spot is now surrounded by superstores, shopping centers and eateries, both big and small. The Kirkpatrick’s apple business is also in close proximity to The Great Smoky Mountain National Park, which draws upwards of 10-million visitors annually. Dollywood is another nearby tourist attraction that’s popular for millions of visitors as well. You don’t need a degree in economics to figure out that traffic translates into dollars.
When asked about the next three decades of growth, Kent speculates there are two or three possibilities. The beautiful hilltop landscape offers breathtaking views, “People ask about lodging a lot, that could be a natural move for us,” Kent said, alluding to the prospect of opening the acreage up to include some type of lodging for extended stays on the property. Another seemingly logical, possible future expansion is in the growing hard cider market. With more than 4,000 apple trees on 26-acres, Kent said, “the hard cider is a natural move for us,” he also sees one or two more retail shops in the future, but nothing dramatically different, “our challenge,” he said, “will be in maintaining the level of service” that their customers have grown accustom to.