A year of fresh vegetables 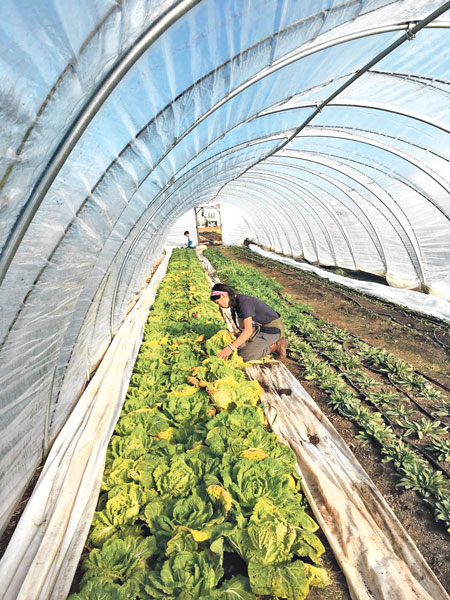 One of the Millsaps’s current projects is refurbishing some of the tunnels. They’re also adding automation to streamline irrigation. Photo courtesy of Millsap Farms

Curtis Millsap said farming is in his genes. Although he grew up in town, his parents were avid gardeners. “Our family had a passion for being outside and engaging with creation,” he said. “My wife Sara and I both love working with kids, particularly outdoors, so farming fits.”

The Millsaps started farming their 20-acre farm in Springfield, MO, in 2007. With good proximity to markets and a strong desire to be connected with people, their plan was to develop a CSA. Although they raised livestock in the early years, in 2011 they decided to focus on growing vegetables.

“I’m a carrot guy, not a chicken guy,” said Curtis. “When I realized I’m wired to check on things every couple of days rather than every day, it was an a-ha moment. We had a vision of having a CSA diversified farm with organic vegetables, but we scaled back from seven acres to a little more than two acres. Things got way better – we got better at managing our soil, better at managing irrigation, making sure weeds were under control and that things happened in a timely manner. We became much more profitable and had a better standard of living.” Today, the farm is a year-round enterprise, headed up by Curtis and his full-time farm manager, with part-time help and apprentices during the main growing season.

Curtis said the native silt clay soils are decent but have improved with compost. “In the last couple of years, we’ve made enough compost to cover two acres about three inches deep,” he said. “Our first go-to for compost is the City of Springfield’s yard waste recycling program – they sell it at a reasonable price.” The Millsaps also maintain compost piles fed with a variety of organic sources including livestock bedding from local fairgrounds, spent grains, chocolate hulls, yard waste, leaves and wood chips.

Although they don’t have a compost turner, the Millsaps trade vegetables for the use of a skid steer to turn the piles several times a year. “It makes a nice, carbonaceous compost,” said Curtis. “This year, we’ll renovate about one-third of our beds and add more compost based on what we’re growing in those beds. We know we can put heavy compost on beds where we’re going to grow head lettuce, beets, sweet potatoes, tomatoes, peppers, eggplant and potatoes. We know we can’t put heavy compost on beds for brassicas or carrots.”

Curtis appreciates the biodiversity generated from organic matter, especially compost. “From year to year, we see plant health and yields increasing,” he said. “Compost is applied primarily in fall, between October and December. Being in the Ozarks, we’ll have 70º days in January and February, so if things dry out enough and we can get into the piles and onto the fields, we do that. We can put compost on tomatoes and peppers as late as March and still have good results.”

When there’s enough space (and as needed), Curtis establishes cover crops in autumn. Oats are his main choice because they don’t get too tall or woody and don’t have to be rolled prior to spring planting. Alternatively, he’ll allow a salad crop to continue growing through winter rather than terminating it. “We try to keep the ground covered with something growing as much as possible,” said Curtis. “If we can’t, we cover it with either organic mulch

or a tarp.” The cover crops are for keeping the soil covered, while compost is for adding organic matter and contributing to soil fertility.

The Millsaps track crops and rotations, transplant dates, bed preparation and first harvest. Curtis also relies on the many photographs he takes each year to help recall that year’s crops. Since there’s a demand for year-round produce, he continually pushes the season back by using row covers and succession planting. “There’s less space available for cover crops in the fall,” he said, “then in spring we may want to put a quick crop of radishes where tomatoes will be planted.”

While the farm produces a diverse selection of vegetables, the top four sellers are salad mix, tomatoes, cucumbers and carrots. “Head lettuce and peppers are also popular,” he said. “It’s a very diverse crop mix. The other crops are sold in much smaller quantities but are still important to the mix. Just because we sell a small amount of something doesn’t make it unprofitable – it’s just something we don’t sell a lot of.”

The Millsaps grow produce in 10 high tunnels, with about 28,000 square feet under cover. “We recognized early on that almost everything grows more vigorously in a tunnel,” said Curtis. “But there are a lot of extra expenses, maintenance and extra labor.”

During their first growing season, the Springfield area experienced a serious hailstorm in January. Although the tunnels were damaged, the vegetables growing inside were not. “The vegetables growing in the field were decimated,” said Curtis. “I needed some space under cover to make sure everything is still growing when weather happens.”

One of the Millsaps’s current projects is refurbishing some of the tunnels. They’re also adding automation to streamline irrigation. “For years, our watering system has been us walking around turning valves on and off,” said Curtis. “This winter, our infrastructure investment is in automated water valves and a centralized water control system.”

The starting house for seedlings is heated with a propane furnace and a wood furnace. “The other heated greenhouse is a Chinese-style greenhouse,” said Curtis. “It’s south-facing with glazed surface, and the rest is earth-bermed. It isn’t actively heated but it rarely gets below freezing.” 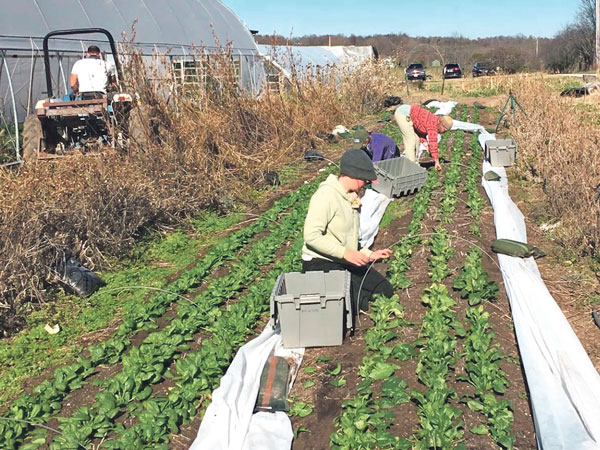 The Millsaps track crops and rotations, transplant dates, bed preparation and first harvest. Curtis also relies on the many photographs he takes each year to help recall that year’s crops.

Although Millsap Farms isn’t certified organic, Curtis employs organic growing practices. He devoted a lot of time learning the best IPM for the farm and continues to fine-tune his growing practices. “No crops are grown in the same area two years in a row,” he said. “Squash rotates across the entire farm every year or the squash bugs would wipe us out. Some of the management is pest exclusion. For example, cucumbers are grown in a screened tunnel and squash are transplanted under insect netting in the field, which stays on until flower. We grow most of our fall brassicas under insect screen or row cover, and arugula and radishes are under row cover to keep flea beetles off. Exclusion isn’t a panacea – it’s still a lot of effort and expense – but I prefer it to spraying.”

However, when sprays are the best solution, Curtis uses them. He cites the example of aphids on ranunculus in the Chinese greenhouse. “In late winter and early spring, aphid pressure in the greenhouses can be extreme,” he said. “It isn’t warm enough for the beneficials that will supply control later, so we have to fill the gap with insecticidal soap, or a pyrethroid as a last resort.”

In the past, Millsap Farms grew produce to fulfill 175 summer CSA shares and 75 winter shares. “This year we had 240 summer shares and 150 for fall/winter,” said Curtis. “It’s COVID-crazy – people suddenly care about what they’re eating.” Customers can select from four share sizes, and people often rejoin the following year with a larger share.

The Millsaps use Harvie software to manage CSA shares. “The data helped us see how much extra produce we were growing but not necessarily putting in CSA boxes,” said Curtis. “It allows us to do customized CSA shares.”

At first, shares began in April, but Curtis realized people wanted cucumbers and tomatoes, not radishes and spinach. “We made some investments so we’d have tomatoes and cucumbers by the middle of May,” he said. “The summer season ends the third week of October.”

When they started the farm, the Millsaps went to five farmers markets but realized they had to bring in a certain dollar amount to make it worth their time. “The market is great for exposure and for selling too much produce, but we lose Saturdays and a lot of the predictability of CSAs and restaurants,” said Curtis. “We’re harvesting but don’t know if it’s sold. The market has created a solid following for our produce, and a lot of our CSA members come from initial market interactions. It has created a large public profile for us because people have seen us every week for the past 13 years.”

One new offering in Millsap Farms’ shares is flowers, which are also sold at a farmers market. “Sara was going to market and harvest was a little light,” Curtis said, recalling the start of their cut flower enterprise. “We made some bouquets from the marigolds and zinnias we always grow at the edge of the gardens and they sold well. We gradually increased the flowers and now sell a lot of market bouquets.”

Curtis said cut flowers are extremely profitable when they’re well-managed, but there’s a learning curve. “Flowers have to be perfect,” he said. “When you go to farmers market, you’re putting on a show. You’d better put on a good show or nobody is going to show up to watch. Cut flowers are a big part of that.”