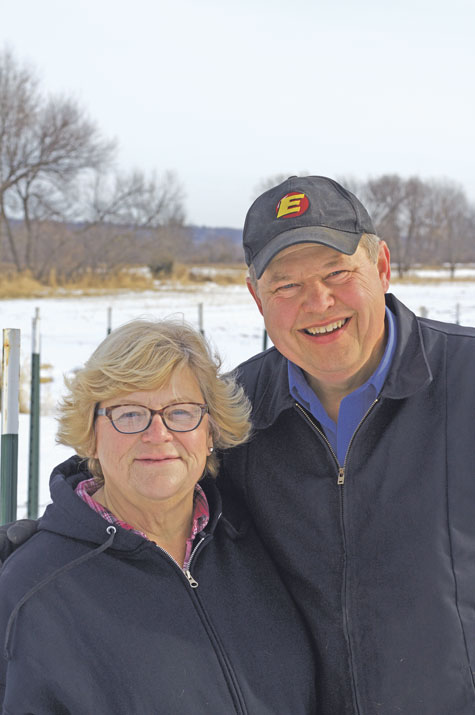 Terri and John Anderson started Valley Veggies in 1997 and have seen many changes over the years.
Photos courtesy of Valley Veggies

Winter in Minnesota is snowy and cold, but Terri Anderson and her crew are thinking spring as they plan the upcoming growing season at Valley Veggies, their farm in Lake Crystal, MN. Terri, who owns the farm with her husband John, explained some of the history of the farm and its changes over the years.

Terri’s great-great-grandfather came to the U.S. from Germany and built a gristmill to serve farmers in the mid-1800s. That mill is in Minneopa State Park, which adjoins the family farm, and it’s an integral part of Valley Veggies’ history.

Terri is living on the family farm, and a portion of the farm will soon be added to the park. “I’m the fifth generation,” said Terri. “Changing circumstances, a lot of flooding and life in general means it’s time to let that farm become part of the park. I’m living on a portion of the land, and the house my mother is still living in will be used as a walk-through period exhibit.”

The farm was originally used to grow corn, melons, strawberries and other favorites. During the 1940s, Terri’s grandparents grew hemp on the farm. “In the late 1970s, when my parents started farming, they became certified organic growers,” said Terri. “They grew corn, soybeans and 45 acres of vegetables.”

In 1997, Terri and her husband started farming on their own. Although Terri’s parents operated the farm under organic certification, Terri dropped the official certification and retained the organic growing methods. Today, they farm a portion of the original acreage.

As Valley Veggies approaches its 23rd season, Terri explained how the family marketed vegetables in the early years. “We started small,” she said. “Our four children sold produce from a trailer at the end of the driveway. The business progressed, and we’ve made a lot of changes along the way.”

Although Valley Veggies has no employees, Terri has a dedicated group of volunteers who pitch in and work on the farm throughout the growing season. The volunteers lighten the workload and help Terri and John maintain their motto: “Work smarter, not harder.”

When Valley Veggies started, Terri concentrated on growing popular favorites such as sweet corn and tomatoes, but has since expanded the selections to satisfy customers. “My clientele has changed,” she said. “We like to listen to our customers and find out what they want. In this area, people want canning tomatoes. I also grow heirloom tomatoes, and some of the canning tomatoes are heirlooms.” Customers are also interested in slicing and pickling cucumbers, okra, cabbage, green beans, peas and winter squash.

In addition to the popular vegetables, Terri enjoys growing several varieties of sweet and hot peppers, Mexican gherkins, ground cherries, sunberries and kohlrabi. “We live in an area with a lot of German heritage, so kohlrabi and cabbage are important,” she said. “Since we grow a lot of pickling cucumbers, I also grow dill to go with those.” This year, Terri plans to add raspberries to the U-pick area. 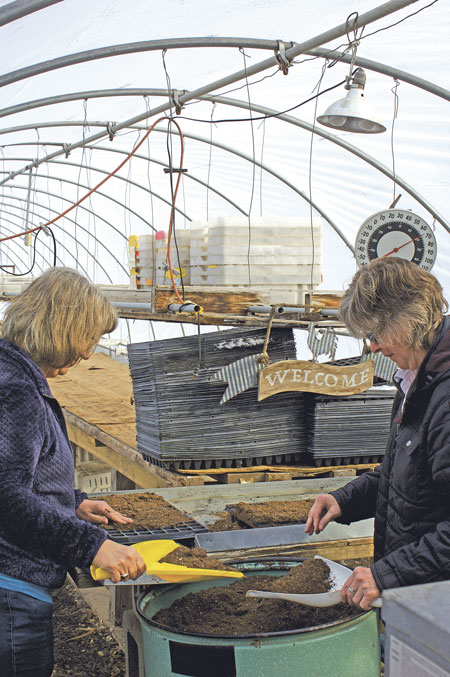 The Valley Veggies growing season begins when it’s still quite cold, so it’s a challenge for Terri to start all the plants onsite. “In February, we start growing in the greenhouse,” she said. A wood-fired furnace provides heat for the farm’s growing houses. “We start between 45,000 and 60,000 plants every year, beginning with plants that take the longest to mature.” Seeds for hot peppers are among the first to be planted, followed by flower varieties that require more time to become established.

Ideally, ground preparation for spring planting has taken place the previous autumn, but Terri said the past two growing seasons have been wet and rainy, making it difficult to get into the fields. “The past three falls, we’ve barely been able to pick the crops without mud sucking the boots off our feet,” she said. “Sometimes we can’t take the tractor in the field, so we pick into five-gallon buckets and walk.”

For starting seeds, Terri uses thermostatically-controlled heat mats, making sure each species has the conditions that suit its heat, light and moisture requirements. When Terri starts seeds, she’s watching the calendar for May 1, the date Valley Veggies opens to the public for plant sales.

In spring, customers can select from a colorful array of hanging baskets, which Terri designs herself, as well as vegetable plants. As the season progresses, plant sales transition to flowers, herbs, greens and early tomatoes and peppers grown under cover. To ensure customers’ success with plants in their own gardens, Terri tries to grow a variety of flowers for different conditions including those that do best in shade, sun, pots or in the ground. Terri also grows some native plants and native grasses for landscaping.

One of the most popular draws at Valley Veggies is a U-pick flower patch, which has become a staple for the business. Some of the local greenhouses that supplied flowers have gone out of business, so Terri filled that void. “We do pick-your-own flowers and can create bouquets on site,” she said. “We also help people set up flowers for weddings or special occasions.” Terri grows about 40 different flowers, and said the favorite is Benary’s giant zinnia, which lasts as a cut flower for up to two weeks.

Vining crops such as pumpkins and winter squash are put in the ground as transplants. “We till between the rows with three different tillers – six feet, five feet and four feet – until the vines cover the rows,” said Terri. “Then we let the weeds grow up, which help with frost protection.” In other sections, straw is laid on the ground in autumn, then tilled in spring, which helps enhance microbial life and loosens the heavy clay soil.

“Farmers markets and places like ours have evolved over the past 20 years,” said Terri. “The local farmers used to sit on a street corner – every farmer had their own corner. Farmers markets came on the scene here about 35 to 40 years ago, but they weren’t as well supported as they are now. It’s a shift in the attitude in the public, and has taken a long time to support local growers and the local economy.”