Adding value to a diverse farm 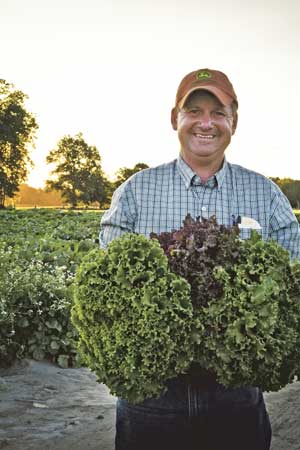 For three generations, the Collins family has been growing snap beans and other produce on Fair Weather Acres in Rocky Hill, CT.

“We’re a third-generation farm, one of largest snap bean growers in New England,” said Michele Collins, explaining the farm she and her husband Billy operate. “Before 2011, we were growing on over 700 acres, producing 2.4 million pounds of snap beans every season.”

Although agritourism wasn’t in the plans for the farm, a series of events changed that. Michele said that 2010 was one of Fair Weather Farms’ worst growing years ever, with 250 acres — more than a third of what they were growing — lost to Phytophthora. “Our ground runs 10 to 20 feet deep in topsoil, but we have seasonal flooding every year,” she said. “About 95 percent of our acreage is on a flood plain, and Phytophthora moves with water.”

The combination of unpredictable weather, crop failure and wavering markets led the Collins family to consider diversifying the farm with agritourism. Michele said they brainstormed and researched prior to making changes because they wanted to stand apart from other agritourism attractions in the area.

“We were set to have our best year ever…” said Michele. “Then Hurricane Irene dumped rain north of us and the fields flooded. Many of the crops were under water and couldn’t be harvested due to contamination risk.”

The flood ruined 450 acres of green beans, 15 acres of vegetables and 30 acres of pumpkins. “More than three quarters of our business was dependent on wholesale farming,” said Michele. “That’s way too many eggs in one basket. Wholesale market price was similar to what was paid 30 years ago, but input costs have risen 300 to 500 percent.”

Billy and Michele decided to decrease the acreage devoted to wholesale vegetable crops and eliminate areas of low margin while increasing the retail component. They put more focus on the corn maze and fall fest, and added a CSA. In 2012, the first season for the CSA, 120 subscribers signed up. The following year there were 250 subscribers, and by 2017, the CSA served about 550 subscribers.

Fair Weather Acres increased retail options from 50 vegetable and herb varieties to more than 150 varieties, with crops on 75 acres instead of 15. Three additional greenhouses were constructed for bedding plants, hanging baskets and increased hydroponic tomato production, with 3,000 tomato plants in two greenhouses. Michele has found a niche market in creating unique added-value planters using reclaimed materials such as old chairs and purses planted with a variety of colorful summer annuals.

Although Michele said agritourism was out of the box for them, it turned out to be a good step for the farm. “It was a new direction that we didn’t tie into any other part of our business,” she said. “We did a lot of research and planning and added our own ideas.”

The Collins’ children were young when the venture was initiated, but Michele said this provided them with a unique view into the sales sector they were targeting — young families. “I understood what it was like to take young kids somewhere without my husband because he was always busy in the fields,” she said. “I set things up to make it easy for moms. We also decided to price it with an all-inclusive ticket — I wanted a one-price deal for everything other than food.”

In 2010, the corn maze and fall fest was on about six acres with two acres for parking. Michele designed and hand-cut the corn maze with string trimmers the first two years, but has since used a professional maze company for design, cutting and maze maps. There were just a few activities the first year, but the family quickly realized what changes should be made. One was making the wagons easier for guests to use. “We had steps up to the wagon,” said Michele, “and realized quickly that it needed to be handicapped accessible, stroller friendly and accessible for everyone.”

The fall fest drew about 5,000 attendees the first year. Visitors initially showed up by the hundreds, then business slowed due to numerous area fairs. “Then Columbus Day weekend hit,” said Michele. “We learned there’s an ebb and flow. In the middle of the season, no matter how you try to get people to come earlier with discounts, special grandparents’ weekends, military weekend — they still come the same weekend and complain that it’s busy. There isn’t much we can do about that.”

One attraction the Collins’s immediately improved was the corn pit, which was initially increased in size from 5’ x 8’ to 20’ x 20’. Today, the corn pit measures 96’ x 35’ and is housed in its own greenhouse with roll-up sides, a large playscape, benches and end doors for air circulation in hot weather. The base is paved to prevent moisture wicking into the corn. Michele said that it takes 140 tons of grain corn to fill the pit, an investment of $15,000 to $18,000, and remains their largest attraction.

Michele compares numbers from the original agritourism venture to last year’s numbers. In 2010, Fair Weather Acres drew about 5,000 guests, had four attractions and was not handicapped accessible. About four percent of net farm revenue came from Fall Fest. “In 2107 we had 40,000 people on the same six weekends,” said Michele, adding that the farm is sometimes open for seven weekends depending on the calendar. “We have 10 attractions now, and 50 percent of our school groups require handicapped accessibility now. I’m proud of that — we give them an opportunity to be somewhere where no one else is.” As a former teacher now hosting multiple special needs groups, Michele is keenly aware of the risk of bullying and makes every effort to make sure groups are appropriately separated during visits.

Safety for all guests has been a main focus from the start. Michele made sure there were ample walking paths and appropriate fencing so guests didn’t have to pass through traffic. “That was a main goal of ours,” said Michele. “I know how easy it is to lose sight of a child quickly.”

Pedal carts, a tire playground and an animal interaction area are visitor favorites. The addition of a jump pillow has been popular, and a second pillow has been added to segregate children by height for added safety.

The family continues to upgrade the attractions and adds a new feature every year, and while the agritourism aspect of the farm doesn’t define Fair Weather Acres, it has changed their bottom line; and hopefully, help visitors gain an understanding of agriculture.