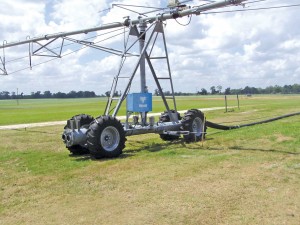 by Karl H. Kazaks
In 1979, Martina Navratilova and Björn Borg won Wimbledon, Kramer vs. Kramer was in the movie theaters and the cost of a first-class stamp was 15 cents. In American agriculture, over 60 percent of irrigation was performed through surface or subsurface methods.
“That has drastically changed,” said Dr. Hamid Farahani, Water Management Engineer at NRCS’s East National Technology Support Center.
A revolution in irrigation technology — including the development of more efficient sprinkler, drip and micro irrigation technology — has pushed the amount of surface irrigation in our country to under 40 percent, with pressurized methods now accounting for more than 60 percent of irrigation.
Micro-irrigation has grown particularly fast, jumping from about one percent to six percent of all irrigation in the U.S. Such data were just a few of the highlights from a recent online program about irrigation technology.
In 2010, the amount of water withdrawn for irrigation was the lowest since before 1965.
Of the water withdrawn from surface and ground water, agriculture is the second largest user, at 34 percent of all water withdrawn, behind only thermoelectric industries. One difference between the two industries, however, is that in agriculture, some 70% of water is lost to the atmosphere, while only 2 percent of water used for thermoelectric purposes evaporates, with the rest returning to our nation’s waterways and groundwater systems.
It will come as no surprise to learn that in agriculture most irrigation occurs in the West, with less irrigation in the Midwest and East. You might not know, however, that of the water used in irrigation, 78 percent comes from surface sources, with 22 percent coming from ground water sources.
In 2013, there were over 55 million irrigated acres, each receiving an average of 1.60 acre-foot of water.
Irrigated agriculture covers only 16 percent of all harvested cropland, yet that land produces nearly half of the total value of our national output. The main reason surface irrigation has become less common is because it doesn’t maximize a farmer’s yield per unit of input.
Consider a field with furrows and surface irrigation, Dr. Farahani suggested. Such systems are inherently low efficiency, with over-irrigation at the upper ends of fields and under-irrigation at the lower ends of fields. That’s costly, both in terms of yield and inputs. (A cost that could be even higher if the cost of water rises.)
So, farmers have looked to technology to bring irrigation as close as possible to the roots of plants. When looking back on the key advances in micro-irrigation, Dr. Farahani said, “Number one on my list would be drip tape.”
Other technology advances have helped farmers and engineers design better drip-tape systems. Such advances have occurred in emitter hydraulics, valve systems, automation control (including automation based on real-time feedback, such as from soil moisture sensors), and filtration systems (including the development of self-cleaning filters).
After drip-tape, Farahani would rank subsurface drip irrigation (SDI) as the second most revolutionary advancement. Growers are even using SDI in places for annual crops such as cotton and corn. With RTK satellite technology, growers can precisely install SDI.
Other advances include the development of plastic mulch and recyclable material, as well as the increasing availability, affordability and range of applicability of various micro- and targeted-irrigation technologies.
Drip irrigation tools can even be designed to work in low-tech situations, such as in a low- pressure gravity system, where the water supply situated at a height above the crop field or growing location.
Even though surface irrigation is less common than it once was, that doesn’t mean advances in that method of irrigation haven’t been developed.
“Probably the biggest innovation in surface irrigation has been the laser level,” said Clare Prestwich, Irrigation Engineer on the NRCS’s National Water Quality and Quantity Technical Development Team.
“Surface irrigation is dependent upon the surface of the ground to deliver the water,” Prestwich said. “The more level it is, the better application you get.”
Another advance in surface irrigation has been the adoption of automation. Automatic valves allow growers to send water out in pulses. As with micro-irrigation, sensors are used to turn pumps on and off in surface irrigation. Tail water recovery has also advances, with some farmers building collection systems to reuse tail water.
The number and variety of sprinkler systems has multiplied over the years. Today pivots can be used for LEPA (low-energy precision application). There are also towable pivots and articulated pivots. The guidance system for sprinklers has also evolved, in many cases, from buried wire to GPS.
There is now a myriad assortment of nozzle types, from sprayers with no moving parts to wobblers to spinners. An assortment of different pads is available for each kind of nozzle. There are even drip lines on pivots, dragon lines.
As for pumping, over 34 million acres use pumping for irrigation, with over 600,000 pumps in use on at least 154,000 farms. Seventy percent of pumps are used to draw from wells. Most pumps are powered by electric or diesel, though a handful are powered by natural gas, propane, or gasoline.
Even though pumping has been done for millennia, that doesn’t mean there aren’t advances still happening. Newer premium duty electric motors today are more efficient than those of the past.
For more information about how the cutting edge of irrigation technology can help you and your farm, consult with your local extension agent.