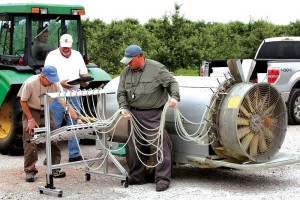 by Bill and Mary Weaver
Now New Hampshire and PA Extensions have a grant-funded calibration unit that can quickly and accurately measure the output of each nozzle on the sprayer. In Pennsylvania, the cost to the grower is $50 for the first sprayer and $35 for a second one. The rest of the expenses, estimated at $200, are paid for by grant funds supplied by the PA Department of Agriculture and the State Horticulture Association of PA. The calibration unit has eight cylinders, each with a quick-connect hose that connects to the nozzles on your air blast sprayer. “The unit does the job with precision,” says Dr. Kerry Richards, Director of the Pesticide Education Program for Penn State Extension. According to Richards, the grower can see on the unit which of his nozzles are ‘off’ and not working properly. “What’s at stake is your bottom line,”
Richards continued, “If you’re applying too much chemical because your calibration is off, you’re wasting significant money. If you’re applying too little, the chemical may not be effective, and you may lose money from reduced yield or poor produce quality.” Matt Boyer, co-owner of the 300-acre Boyer Orchards near New Paris, PA, spoke for many growers when he said after his air blast sprayers were properly calibrated with the new unit, “Even if you have only a few acres of trees and one sprayer, you will save money.”
After working with the unit for two seasons, Richards said, “Every sprayer is different. Some need more calibration and attention than others. On average, proper calibration with this machine can save you 10 percent on your pesticide costs. In many cases, we can uncover problems that can save growers a lot more.”
In the course of going from farm to farm with the calibration machine, the calibration team has come up with quite a few stories of unexpected, potentially expensive problems solved. The team is a group of professionals: three retired PA extension agents: Eric Oesterling, Bob Leiby and George Perry; extension educator Bob Pollock; Eric Denemark, Pesticide Education Program; and Joel Branstetter.
One grower told the tech team he knew he had one nozzle that needed to be replaced. The team put on a new nozzle from a freshly opened pack labeled as the correct size. It made the problem worse! Finally, it was determined the nozzle was actually two sizes larger and not the size indicated on the unopened pack. Without the calibration unit, who would have known? Another grower had just purchased a brand new sprayer and had been assured by the dealer that it was calibrated correctly. “It was actually completely out of whack!” continued Richards. “This was evident on the calibration unit. When we showed the grower, he said the technicians had saved him enough on spray materials to pay for the sprayer in the first season.”
One day the calibration team did six sprayers, and determined they were actually traveling 1/2 mile faster than the growers had calculated. That made a huge difference in the amount being applied. “Ground speed is absolutely critical to the amount of material you’re spraying per acre. With the flick of a button, from the turtle to the rabbit setting on the tractor, the change in speed could change the spray application rate from 65 gal. per acre to 80 gal. per acre.”
The grower estimated that knowing the difference in speed would save him a considerable amount of money. “Ideally, it’s best if you don’t have to rely on your rpm to determine speed. A better plan is to set up a measured course, and every time you spray, drive that same course to double-check your speed. Then it won’t matter whether the rpm on your tractor is working correctly. You can actually calculate how fast you’re going by driving that course. Do that at least twice at the same time to ensure even more accuracy.”
Even tiny particles of dirt can cause a big difference in the output of a nozzle. This can give you a problem with pest and disease control, because the pesticide application won’t be uniform from all nozzles. This shows up very clearly with the unit, because the tube that corresponds to the nozzle shows a decreased amount of spray collected. “Use a can of air to blow out the dirt,” advised Richards.
Another grower unknowingly had a pressure gauge that was defective at the pressure reading it indicated. “The unit caught the problem and the pressure was increased to the desired amount.”
The effectiveness of the pesticides you apply depends on the accuracy of how much you’re applying to a given area. Tractor speed and tire pressure are also important variables in determining your spray output.
Be aware that the volume of spray you’ll need to apply will vary through the season. The thicker the plant population or the leaves, or the further you are from the spray target, the more volume per nozzle is needed. It’s a mistake to use the same application rate under all conditions. “This is all about your bottom line. If you have to go out of business, we won’t have the food produced by what you do day after day. Proper calibration of your air blast sprayer could make a significant difference in your bottom line, as many growers have found. “The growers of PA, in using this program, owe a huge debt of gratitude to George Hamilton of UNH Extension and John Clements of the University of Massachusetts, who did the original demo where we learned of the availability of this machine,” Richards continued. “George has mentored us, and is now helping us with the next important phase, determining where the spray output lands. Stay tuned for that story at next winter’s meetings!”