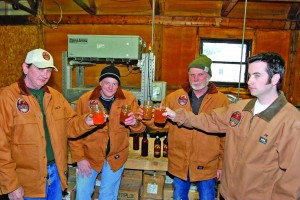 by Karl H. Kazaks
FLUSHING, MI — “It was a business decision,” Jim Koan said. “The writing was on the wall.”
Koan had been growing apples conventionally for 20 years since returning to the family orchard and farm in 1976. He had helped grow the apple orchard from 15 to 120 acres.
But with the market being dominated by a race to utilize economies of scale, Koan said, “I didn’t have enough acreage to keep up with the bigger guys. I wasn’t making enough money on the acreage; we had to expand fast enough to keep up.”
So Koan decided to become an organic apple producer. He started with a 20 acre orchard, which was first certified organic in 1996. Although there were higher input costs with organic apple growing, so too were there higher margins, which convinced him to convert the remainder of his orchard to organic production.
After fully transitioning to organic production, he went from being a small conventional grower to a large organic grower, at least by Eastern U.S. standards.
At first Almar Orchards was selling its organic fruit to big stores like Whole Foods and Trader Joe’s as well as smaller chains and resellers. In 2001, though, Koan started marketing his own cider, J.K.’s Scrumpy.
That, too, was a business decision. “I really never had a passion for making hard cider,” Koan said. Instead, producing the beverage was “a means for keeping the farm profitable.” Finding sufficient buyers for his fresh fruit, he said, was an “unpredictable” enterprise. What’s more, now that they make cider, they can keep people employed year-round.
Production of J.K.’s Scrumpy Farmhouse Organic Cider and another cider now uses all of Almar Orchard’s production, and then some. (The orchard does keep back some fruit to sell from the farm.)
To meet the growing demand for his cider, Koan recently contracted to buy apples from an organic grower near Traverse City. He’s also started non-organic cider brands, which he makes with fruit grown by a neighboring cousin.
Despite Koan’s success with organic apples, he is cautious when speaking to individuals interested in organic practices. His success, he believes, is largely based on his experience as a conventional grower.
“That helped a lot,” he said. “If you don’t have that background, it’s going to be tough.”
Prior to transitioning to organic production, Koan had been using sustainable practices such as IPM, natural manures, and monitoring degree days to predict pest pressure.
“But it was still scary jumping off that cliff,” he said.
To mitigate his risk, he started with just the 20 acres, an orchard with a multitude of apple varieties and root stocks. Seven years later, his entire orchard was organic. “I always recommend people transitioning to organic to start with a few small blocks,” Koan said. “You’ve got to crawl before you can walk and walk before you can run.”
Ultimately, though, Koan sees an approach developing that is a hybrid of organic and conventional production. “It’s going to be a sustainable approach which takes the best from both approaches and mixes them together, an approach which is best for the soils and produces the most nutritious foods.”
That’s already happening, in his mind, as conventional growers — motivated by the higher cost of chemicals, the increasing market share of organic products, and other factors — are looking at organic methods and saying, “I think there’s some fit here.”
The unpredictability of organic standards may make it difficult for producers to continue to remain certified organic. The NOSB recommended that the NOP amend its rules to reclassify streptomycin as prohibited rather than restricted from use in organic production. In the more humid eastern part of the U.S., Bixler said, the antibiotic is an important control for fire blight. To his mind, as a naturally occurring substance (like penicillin), streptomycin shouldn’t be prohibited.
There are alternative controls for fire blight, such as natural yeasts. The yeasts outcompete the fire blight bacteria while only slightly russeting fruit. But the yeasts are suitable only in more arid western parts of the country, because they are adversely impacted by copper and sulphur, which eastern apple and pear growers need to spray to control scab.
“It’s like Russian roulette,” Koan said. “Eventually there will be a time when the temperatures and degree days and rain come together and fire blight will come in and wipe out an apple orchard.
“I can’t base the rest of my life and career and farm on politics. I can’t do business that way as a perennial apple grower.”
Koan admits that the decision to prohibit streptomycin (effective October, 2014) has encouraged him to prepare for a time to move “away from organic production.”
It is possible to substitute higher rates of copper for streptomycin, but that damages the appearance of fruit. For Koan, who uses almost all of his fruit for cider, that’s not such a big deal. But for people trying to grow fresh fruit, he worries, the rule “will put people out of business.”
The main difference between conventional and organic practices, Koan said, is with organic you have to spray more often — and the window for spraying is less forgiving. Which means more sprayers, more equipment, more labor cost, more maintenance and repair. “It takes a lot more management and a lot more help,” he said, “and you have to have good help, too.”
Still, at the end of the day, Koan said, it’s good to know that you don’t have to worry about pre-harvest intervals or orchard protection standards.
Where Koan gets his biggest satisfaction, however, is in his sales of cider — to Washington state.
“I’m one of the few eastern apple growers that can sell their apples to the state of Washington,” he said. “I grin every time I get an order from Washington.”