An apple every day 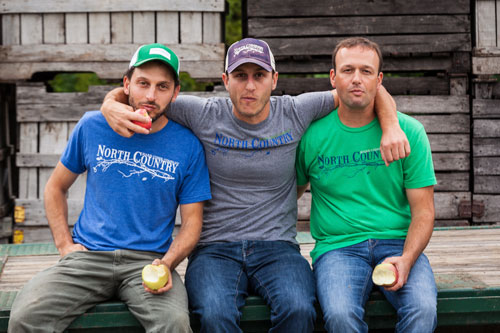 (L – R) Ivan Gordon, Silas Gordon and Ronald Dixon are the brains and the brawn behind North Country Hard Cider.

Silas and Ivan Gordon were raised in a rural area of central Maine and grew up foraging for wild fruit, including raspberries, blackberries, blueberries and apples. Silas fondly recalls having an apple every day.

“In our house, there were no additives or preservatives allowed,” said Silas, adding that his mother was a chemistry teacher. “She was very serious about it.” Silas accompanied his mom to the grocery store, showed her products and asked if he could have them. “She’d read all the fancy terms on the back and explain why we couldn’t have it,” he said.

When Silas was old enough to drink, he quickly learned that the sulfites in alcoholic beverages gave him a headache. Silas and Ivan also found that the ciders they tried didn’t have a distinct apple flavor. “We tried ciders from all over the country and the world,” he said. “They didn’t say ‘There are apples in this.’”

Silas was surprised that a product that’s supposed to be all apples didn’t have an apple flavor. “After we saw what was on the market and tried a lot of different ciders, we knew there had to be a way to make it better,” he said. “At that point, my friend Ron Dixon had been homebrewing for about eight years. We started making cider without any added sugar, sulfites or sorbates, and it was unpasteurized. Every book will tell you not to make cider the way we were making it.”

The Gordon brothers teamed up with Dixon and worked on perfecting cider recipes. Silas said cidermakers usually start with pasteurized cider, add sulfites, ferment it all the way dry, then back sweeten it. “We didn’t want to do any of that,” he said. “We wanted the sugar to come from the apples. The concept was to have something that smells and tastes like apples.”

After many test batches at home with myriad yeasts and both wild and orchard-grown apples, the trio found it was possible to make cider they way they wanted to. “It’s a challenge because we aren’t letting the product ferment all the way to the end,” said Silas. “We aren’t letting the yeast get all the sugar. There are ways to do that by adding sulfites and sorbates, or pasteurizing or sanitary filtering, but we aren’t doing any of that. Our initial process was based on cold-crashing the product – getting the yeasts to stop eating or at least slow down, then lots of racking to clarify and get the yeast out.”

Silas explained that each racking from one vessel to another relieves a lot of the CO2, which allows more of the fine sediment to crash out. “We found that this works, and we can get a finished product that smells like apples, tastes like apples and the residual sweetness is from the apples – there’s no added sugar or back sweetening,” he said.

The original North Country Hard Cider press is semi-sweet, but Silas said those who taste it don’t perceive it as such. “It’s a different experience,” he said. “The sugar is from the fermentation process from the apples – we aren’t adding sugar at any point.”

The trio worked on perfecting their cidermaking process for several years at home, to the point they were fermenting 50 gallons at a time. Silas and Ivan worked in construction for 20 years, and Dixon is a science teacher, so the trio decided to pursue making a great product for their own cidery. 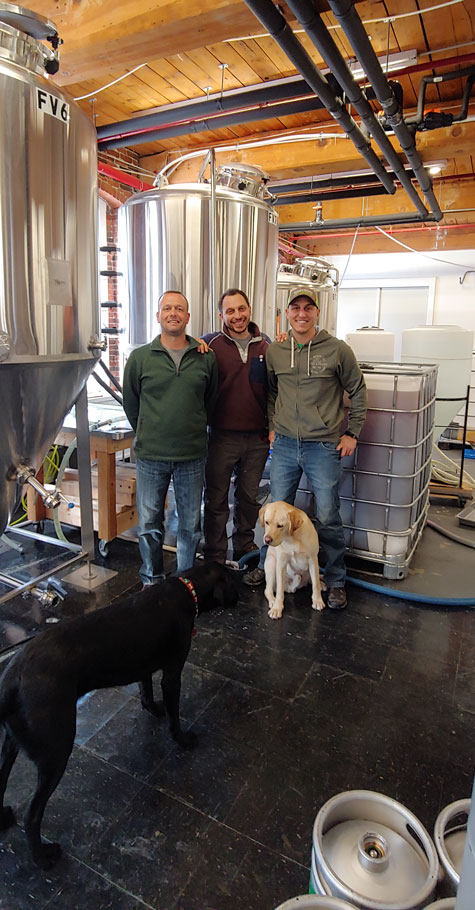 North Country Hard Cider is situated in an old mill along Salmon Falls River where New Hampshire borders Maine. The Gordon brothers’ construction background came in handy as they built their own tables and a custom bar in the tasting room and set up the plumbing and glycol systems.
Photos courtesy of North Country Hard Cider

North Country Hard Cider is situated in an old mill along Salmon Falls River where New Hampshire borders Maine. The brothers’ construction background came in handy as they built their own tables and a custom bar in the tasting room and set up the plumbing and glycol systems. The business was founded in early 2014 and established in a space by late spring. After six months of building and obtaining licensing and inspections, North Country Hard Cider Company opened in November 2014.

Scaling up from their home-based system was one of the first challenges. “Our goal was to get people to try it,” said Silas. “It’s that different. Once people try it and experience what we worked so hard on, they’re brand ambassadors because they’re so surprised by the experience. Some of our best customers are people who said they didn’t like cider and never drank it. Our cider doesn’t create any of the classic (negative) experiences they had. We want cider to be recognized differently than it has been in the past.”

Despite knowing they had a good product, Silas said they didn’t expect it to take off so quickly. Although their business plan included a three-year projection, sales exceeded their third-year expectations within a year.

The trio remains committed to starting the cidermaking process with the best apples possible, and to that end, Silas and Ivan grow a variety of apples, including some bittersweets for cider, on their farm in central Maine. Some of the classics include Dabinett, Kingston Black, Roxbury Russet, Baldwin and GoldRush along with Honeycrisp, Ginger Gold and several other varieties for eating. Despite his desire to grow apples for the cidery, Silas found it difficult to devote time to both the cidery and the orchard, and found an experienced orchardist willing to grow what they need.

The process isn’t a lot different today than it was when the three men started. Silas typically starts the process with an ale yeast, and brings in UV-treated juice. “There’s wild yeast on apples and it lives in the cider house where all the pressing is done,” he said. “The wild yeast has been in the cider house a very long time, and it’s part of every fermentation.”

After starting with three original cider selections, North Country now offers 20 selections throughout the year. “We have about nine offerings in our tasting room,” said Silas. “We offer some barrel-aged ciders, and a cyser we ferment with apple blossom honey. This year we worked with University of New Hampshire where they’re growing grapes and kiwiberries, so we did some wild-fermented cider with grapes.”

North Country Hard Ciders are currently distributed in Maine and New Hampshire, and will soon ship from the website. For the first three years, the trio did their own distribution, but they started using local distributers a little over a year ago. As their business grows, they remain committed to providing the same level of service and quality product to both faithful supporters who helped build the business as well as new patrons.

“A lot of people push and try to go fast,” said Silas, reflecting on guiding the business as it grows. “I don’t think decisions are made well that way. We look at every angle and make sure the decision is being made for the right reasons.”