Ann Stamp is leaving a mark on future generations 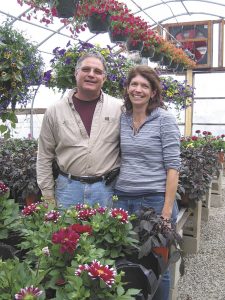 by Kristen M. Castrataro
Ann Stamp was in Scotland for the birth of her first grandchild when she received an email informing her she had been selected Farm Mom of the Northeast and was one of five finalists for Monsanto’s Farm Mom of the Year. Her daughter Laura had submitted an essay nominating her mother for the award. It was an appropriate setting for a woman who says, “Being a farm mom is about the whole family.”
If anyone should know about farm families, it is Ann. Farming is in her blood. Her father was a Cooperative Extension Dairy Science Specialist at Michigan State University, and her mom grew up on a Michigan farm. Ann went to Cornell University and majored in Plant Sciences. That is where she met Bill Stamp III, a major in Agricultural Business. The November after they graduated, they were married.
Bill also came from a long line of farmers.
Ann was thrilled to be marrying into an agricultural family. Of transitioning from the Midwest to the East Coast she notes: “Coming to Rhode Island was just the next great adventure.” It has, indeed, been an adventure.
Farming is ever fraught with challenges. Some of those come from weather, some from the economy, and some from the political climate. Some come from the realities of an increasingly urbanized neighborhood.
In the 1960’s, the interchange for Interstate Route 295 was installed blocks away from the Stamps’ farm, and their neighborhood was rezoned as industrial. Recognizing that the cost of owning land in that area would only grow higher, the Stamp family purchased some other properties in southern Rhode Island.
Those different parcels of land now serve as the legs of a diversified farm business that Ann and Bill continue to run along with Bill’s parents.
Both Ann and Bill credit each other with their success. Ann remarks, “We’re a team. I could not do any of this without [Bill]. My husband grows incredible plants.”
Bill may do the growing, but Ann does the planning, sales, and marketing. She selects the varieties they grow, sets up the displays, and directs the marketing. Ann contends that she has the “best customers in the world,” and she strives to serve her clientele beyond providing gorgeous plants. She views working with the public as a privilege as well as an opportunity to educate them about the varied aspects of agriculture.
Wednesday night Planting Nights are an opportunity for customers who feel green-thumb deficient to gain some skills and confidence and for experienced homeowners to express their creativity. Participants learn how to select complementary colors and plants and create container gardens, window boxes, and more at no additional charge.
Ann also promotes the “Green Stamp Rewards Program,” their customer loyalty program. For each $10 spent, the customer earns a point. At the end of the greenhouse season in July, the points serve as a half-off sale, a way for the Stamps to thank their customers for their year-round support.
That support extends beyond the greenhouse operation. On the properties in the southern part of the state, Bill grows sweet corn and pumpkins and offers wagon rides in the fall. The corn season is a demanding time of year, and the first crop is already in the field and under row cover. When the harvest begins in July, Bill works from 2 a.m. to 7 p.m., picking and shipping product to over a dozen local markets.
Ann’s day starts at 3:30 a.m., and in addition to the roles of wife, mother, business owner, marketing specialist, and customer service representative she adds that of teacher. In 2000, after watching some friends’ homeschool, Ann decided to take on the challenge. She went from homeschooling none to homeschooling five in one year. She has subsequently homeschooled all of their eight children.
Ann appreciates the fact that her children were raised and educated in a farm environment: “Growing up on a farm taught them to be self-sufficient and to take on responsibility — either taking care of babies or helping on the farm.” It is clear her children have thrived under her influence. Each is attaining success in her chosen profession, and each of them is pursuing something unique to themselves. They are a reference librarian, a nurse, a recruiter, a financier, a soft goods engineer at Hasbro toys (upon graduation from URI), and a junior at Cornell who will be leading teenagers through the Swiss Alps. The youngest two are still studying at home and working on the farm.
Amid the accolades and honors she has received recently, Ann continues to deflect attention off herself: “This award is really about a farm family. You can’t have one without the other, and that goes for the extended family as well.” She also commends the other four regional Farm Moms of 2016, including Farm Mom of the Year winner Mary Courtney of Kentucky. The five women had a chance to meet and formed lasting friendships.
While Monsanto can select only one Farm Mom of the Year, Ann recognizes the hundreds of farm moms who don’t achieve such fame. “There are so many great farm moms . . . I’m honored to be representing them,” she says.