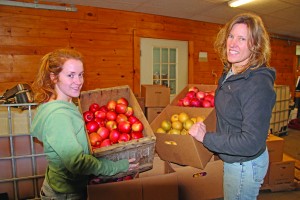 by Laura Rodley
Apex Orchards in Shelburne, MA is known for the distinctively tasty quality of their apples. Owner Tim Smith credits climate and high magnesium in the soil for the taste of his apples that he wholesale to valley stores, farmers and PYO. 18,000 bushels worth.
“[The soil] produces great quality apples. People mention quite often that they’re noticeably different,” said Smith, who assumes underground limestone deposits account for the high magnesium content. The hill apex location claims a premium microclimate for the farm’s 380 acres, 30 planted in apples.
“It’s always better to grow up in hill locations. They have better air drainage, don’t have frost in the spring,” said Smith.
They sell many varieties, including newer Zestar, Honeycrisp, peaches, quince, pears, Asian pears, nectarines and kiwis.
They purchased a parcel up the road last year to start a new four acre PYO, offering peaches, blueberries and apples.
They sell apples to Mount Holyoke in Amherst, Hartsbrook School in Hadley, Montessori School of Northampton and Franklin County Technical School in Turners Falls through the Amherst-based Massachusetts Farm to School Project.
In January, a viewer of the vistas of neatly labeled apple trees might think this is a time of dormancy for Smith, too. Not so. Smith prunes his trees through April. “We start after the first of the year. Better if it’s cold steadily, not up and down.”
Currently five people work at the farm. During the selling/picking season, there’s 20. He hires eight seasonal pickers. “Good group of pickers, do a good job. One of the guys just finished his 40th season with us.”
Most have picked for the farm 20 to 40 years, living at the farm early July to mid-November. Picking starts mid-July with peaches and apricots.
New trees at the farm are packed tighter than previous years. “All the new trees are planted 3 ft. apart and rows are 12 ft. apart. It gets trees at high density per acre and allows us to put it into full production quicker. We’ll be at 1,000 bushels per acre in five years.”
Ground mounted solar panels installed three years ago generate 25 percent of the farm’s electricity.
Smith resides in the house built by his great-great-grandfather Albert Peck in 1860. Seven generations have called the farm home in its different incarnations. The first cold storage built in 1938 received an addition in 1960.
He practices integrated pest management, hiring a private consultant for spraying.
Last year was the first time spotted wing drosophila caused any visible damage on their table grapes. Treatment was one spray for grapes, nothing for blueberries.
Smith’s lifelong immersion in apples pollinated by bees resulted in his business, Pollination Management Services a service that performs consulting work for other growers. He contracts out 55,000 hives for 24,000 acres for blueberry growers in Maine and 40,000 hives for 30,000 acres in the Maritime Provinces in Canada. Three or four weeks in late spring he is busy driving from Southern Maine up the coast.
Local stores sell honey produced from his hives.
What does he like best? “I like that it changes every day, something different every day.” His advice for new apple growers? “Make sure you have your markets lined up before you jump in.”