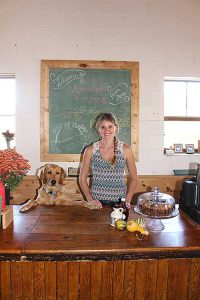 by Lorraine Strenkowski
With a major in Horticulture and a minor in Ag-Business Management from the University of Connecticut, 22-year-old Mackenzie Beckwith transformed her great-grandfather’s dairy barn into an inviting farm store.  Arrowhead Acres offers products from over 10 different local businesses/farmers as well as other artisan crafters.  Cookies, muffins, pies, stuffed breads, soup and many other goodies are made right in the store, with much of the produce that’s grown on the property.
This berry farm and vineyard, located in Franklin, CT, is set on land that has been farmed since the 1800’s. “I’m the fourth generation to want to live and farm here,” says Mackenzie. “My great-grandfather walked through these fields and collected arrowheads!” Now those fields are a thriving vineyard, with a beautiful view of the sunsets. A long laneway travels up and to the back, where it reaches Mackenzie’s home. There, 5,000 strawberry plants are planted along with blueberries and raspberries.
Beckwith’s great-grandparents were Jim and Grace Kahn, who purchased the farm in 1947 and operated a large dairy business along with his own “James S. Kahn Commission Sales.” In 1961 Kahn bought Manning’s Farm Supply directly across the street, and it became Kahn Tractor & Equipment, where still today, it remains family owned and operated.
In 1978/79 Jim Kahn’s daughter, Carol Beckwith, (Mackenzie’s grandmother) turned her father’s dairy into “Southern New England Livestock,” an auction barn which I remember well. Less than a mile from where I grew up, many of our Wednesday nights were spent on the bleachers watching the cattle come through the stockades.  Hot coffee and doughnuts were plentiful, and the memories of cowboys, young and old, with their stories to tell, will stay with me forever. Carol Beckwith retired in 2002, and the barn remained empty. Preparation for Mackenzie’s endeavor began at the end of her freshman year at UConn, 10 years later. Strawberries were planted in May of 2013. The first grapes were planted in the spring of 2014 and Arrowhead Acres was officially open for business on the weekend she graduated in 2015.
In the store, natural wood planking covers the old whitewash and allows for decorating ease. It remains rustic with an antique wooden counter, exposed beams and cathedral ceiling. There is evidence of this barn’s former life, remains of the old kitchen/snack bar can be seen in the cement  floor as well as the scars from holding-pen posts. “It’s rich in family history,” appreciates Mackenzie.
Stepping out the back, onto the former loading docks, the view is spectacular. Transformed into a full-length porch, leading to a lush lawn and oversized stone patio that graciously rolls off to the vineyard. “My vision is to have a tasting room, and full winery.” We plan to host events of every kind!” Several original barn doors open to a grand space just waiting for guests.
Mackenzie’s parents, Jim and Stori Beckwith, have years of grower, farmer and business experience. Her sisters, Kasey and Shayna, along with brother-in-law Zac, help with day to day projects.“My family has been extremely supportive and helpful with the business,” says Mackenzie.