‘Art in the Orchard’ at Park Hill Orchard 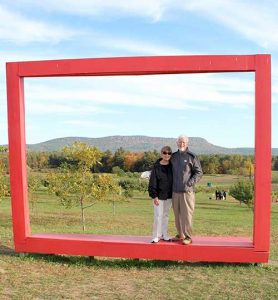 by Laura Rodley
Huge insects that don’t need to be eradicated, horses on the loose, people being framed and liking it. All this, along with outdoor theatre performances, pumpkins, apples, hot or cold cider, donuts and cider slushies can be found at Park Hill Orchard in Easthampton, MA.
A three-foot-long insect sculpture titled Scrapwasp that appears to be ascending a large maple was fashioned by Chris Woodman of Easthampton, whose work has been chosen for Art in the Orchard since its 2011 beginning. His other work, Cosmic Gypsy Jr., overlooks the pumpkin field, complete with stained glass, metal birds and a revolving top of metal cups.
These sculptures were chosen out of 50 to 60 applicants for 20 esteemed positions as part of this year’s juried alumni show from past Art in the Orchard juried shows.
The setting allows people to stroll the orchard and pick apples or scout out more sculptures positioned in other fields. In one field a life-size horse entitled Prince was fashioned of river driftwood and steel by Lindsey Molyneux of Huntington. Last year, Molyneux’s horse sculpture, entitled Feed Me Apples, won 2015’s people’s choice award.
Easthampton’s Claire and Eric Day returned this year to see the sculptures and purchase apples. They are especially fond of Molyneux’s work and of The Big Red Frame, a sculpture by Easthampton resident Jean-Pierre Pasche, that is an outdoor, room-sized, horizontal red frame that people can stand in, perching on the frame’s bottom edge to have their picture snapped with the picturesque orchard and their beloved Mount Tom behind them. It is so popular there are lines of people waiting to be photographed in the frame.
It was Pasche who initially visited the orchard’s then brand new owners, Russell Braen and his partner Alane Hartley with the idea of Art in the Orchard. “Jean-Pierre grew up in Switzerland. He came up here to the orchard with the vision that he’d had as a child in Switzerland, of a new form of farm-scaping.” Serendipitously, it was the same concept the couple had envisioned while they worked the farm.
Braen said, “Easthampton is particularly art oriented. It seemed like a pretty clear thing to do, show flair in our horticulture, offering a clean, well-lit place to get fruit. We want to make it fancy for the people. A lot of people don’t have access to country land, and we want them to be at ease in the country.”
When Pasche conceptualized The Big Red Frame, it struck a chord in the valley. Braen said, “I think what happened is people thought Mount Tom was a pretty nice view, but nobody really admitted it.” Framing Mount Tom in red changed all that.
People driving up, “See their Mount Tom looking like a diamond in the rough, and have an adventure not listed in every guidebook. Our sculptors are well aware of that.”
The Big Red Frame is so popular, a Little Red Frame movement started with people traveling worldwide taking pictures inside folding red frames to post on Facebook, noted Braen.
The first biennial “Art in the Orchard” won the Massachusetts Cultural Council Gold Star Award in 2011 as an exemplary community cultural program. “Last year, 25,000 people walked through the sculpture trails. That’s the kind of critical mass local galleries only hope to attain,” said Braen. Hundreds assist in the orchard, mostly volunteers, acting as ushers and docents.
When Hartley and Braen bought the 127-acre orchard eight years ago, their intention was to prune back the existing orchard to bring it back to life. “Due to health issues the previous owner had left the farm untended for 13 years. We didn’t realize just how far the working orchards had deteriorated.” It became apparent that the orchards were well past bearing age.
They ended up chopping down 58 acres and replanting disease resistant dwarf trees. Eight years later, 20 acres are in fruit: apples, peaches, plums, pears and a dozen hazelnut trees doubling as a tasting garden and privacy buffer for his neighbor.
“We’re sitting pretty; we’ve got young productive trees,” said Braen. Their farm store had a soft reopening in July, offering pick-your-own blueberries. They had hoped to offer peaches, but there were no peaches this year. The store officially opened mid-August and will stay open through Thanksgiving. It is managed by four employees, which, really, could be 10, he said. The fudge and donuts are store-made. They also offer soup. He’d like to offer grilled cheese sandwiches but that’s for another year.
He maintains that, “The idea of community is a pillar of sustainable farming; we’re re-bridging that.” It’s a long way from being computer consultants, their former career, and has been life-changing. Braen’s daughter, mother and sister moved to Easthampton after Braen moved to the farm, pitching in during the ultra-busy weekends and whenever there is a pinch.
Florence, MA residents Shelly DeMeo and her husband, Ray DeMeo, picked a full bag of Ida Reds and Golden Delicious apples. They have returned every year, “As long as they’ve been having the art. It’s unusual, the way they have the orchard set up; you get to walk all around, see the way they have sculptures through their land,” said Shelly DeMeo.
“We make our money selling fruit. We love the fact that we’re a community space, not like a venue, not a commercial zone,” said Braen. “We do sell apples, that’s the core of what we do. But we don’t charge for parking, display logos or come at you trying to sell you things. So far, we’ve found an eater for every stitch of fruit we’ve grown on the trees so I guess we’re a success.”