Asparagus – The perfect crop for a retirement venture 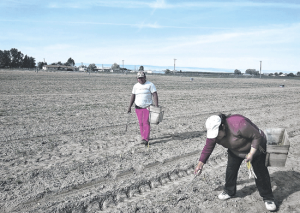 “When will the asparagus be ready?” This is a question Sharon Schmatt, owner of Ol’ Timers Asparagus, hears a lot this time of year as locals anticipate the first available fresh vegetable of the season, a sure sign that spring has arrived in Eastern Washington’s Walla Walla Valley.

The answer to her customers’ questions, Schmatt confessed, is that she doesn’t know. It depends on when the temperature rises enough for the ground to warm, hard enough to predict any season, but especially in a year like this one, where winter didn’t really show its face until February and the cold temperatures decided to linger. In a mild winter it could be warm enough for them to begin harvesting in late March, but typically they start sometime in April.

“Same as when we quit,” she said of the timeframe. “We have no idea – gotta ask the weatherman.” The season typically comes to a close sometime in June when the stalks begin to get seedy.

Looking for a way to move out of town into a more rural area, she and her husband, a teacher who has since passed, started the farm, located on the outskirts of Walla Walla, 40 years ago. Although Schmatt’s father was a farmer in the Valley, she and her husband hadn’t had any experience when they purchased the already established farm, but learned as they went.

In 2010 they whittled the farm from 30 acres to its current nine when the old field was reaching its production limits. She now rents out the other 21 acres to a farmer who grows other crops.

The perennial asparagus grows well for about 17 years before it starts to get too sparse for a good harvest. Then the seeds are collected and the roots plowed out, and the next year the seeds are grown into seedlings and transplanted by hand back into the field. They are planted 14 to 16 inches deep about two feet apart so they have room enough to grow, Schmatt said.

“This crop will be good till 2027,” said Schmatt of the current crop.

After planting, a small amount asparagus can be harvested in its second year but the majority are left alone to grow up into ferns, or “crown,” to enable the shoots to come up thick the following year.

“The fatter the better,” Schmatt said. “[New] customers think the fatter ones are older, but they’re not. If you snap the big fat ones there’s more meat. That’s the tender part.”

She’ll give skeptical customers who are used to the pencil-size stalks they find at the grocery store or home garden a few stalks to try. “They come back and say ‘Oh, you’re right, they are more tender,’” she said.

The harvest lasts for about six to eight weeks before the stalks start to go to seed. The remaining ones are left in the field to crown, where they will grow up several feet. Two local women harvest the crop by hand with a special wooden-handled V-shaped knife to cut the stalk beneath the soil. A piece of tape is placed on the blade to mark how far into the soil to cut, but the women have been doing it so long they no longer need it. They lay the stalks out in neat rows in plastic totes that are secured to their sides with a belt and then Schmatt will collect them from the field once they finish.

If there has been enough rain in the arid Walla Walla Valley they won’t have to water the crop throughout the summer, Schmatt said. They also don’t worry about fertilizing in summer either, so after the season the work is done until the next spring. The bushes turn a striking copper color by autumn and Schmatt enjoys a quiet winter, when she’ll often find deer bedding down in the field after the wind and weather have beaten the bushes down.

In the spring, when the field starts to dry after the winter’s precipitation, the bushes are mowed down so the new crop can begin to grow. This is the only time of year the field is fertilized as well as given a pre-emergent herbicide for weed control. The soil will be rotovated and hilled up as well, since the winds blow away top soil. Schmatt said pests are not an issue.

The majority of the crop is sold in 20-pound boxes at Ol’ Timers’ farm stand in a garage beside Schmatt’s home. She said most of her customers buy in bulk, often getting 10 or so boxes to pickle and can the asparagus. Many of them will invite friends and family over for a pickling party. But she’ll also sell to customers who only want a handful.

She sells to a few downtown restaurants, Harvest Foods (a grocery store that emphasizes locally-grown produce) and a few retirement homes. She said they got the idea of marketing to the retirement homes when her aunt and mother moved into one and her husband approached them to see if they wanted the fresh produce. They were very interested, so he went to two other homes as well who are now regular customers.

Schmatt admitted she doesn’t eat a lot of asparagus these days, but when she does she might put it in a quiche or roast it in a hot air fryer.