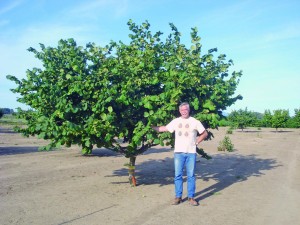 by Sally Colby
Hazelnuts are an important crop in Oregon’s Willamette Valley, where 99 percent of the nation’s total hazelnut crop is produced. The crop accounts for three to five percent of the world’s hazelnuts, with a processed value of about 70 million dollars.
“New plantings continue at a very high rate, so I expect our contribution to go up on the world scale,” said Dr. Shawn Mehlenbacher, Oregon State University professor and researcher in hazelnut breeding and genetics, “In January 2009, we had about 29,000 acres of hazelnut orchards in the Willamette Valley. Acreage of new orchards has increased by about 3,000 acres/year since then.”
However, hazelnut growers endured some rough years when orchards were hit with Eastern Filbert Blight (EFB). “The fungus originated on the American hazelnut — Corylus americana — which is native to the eastern half of the United States,” said Mehlenbacher. “We know that the fungus came from the eastern half of the country. Around 1960, someone imported infected plant material from the east and planted it north of Vancouver, Washington.” Mehlenbacher says the Oregon Department of Agriculture surveyed for EFB in the initial years of the outbreak, but stopped when the disease became widespread.
Although the prospect for profitable hazelnut production was bleak for quite a while, the development of hazelnut varieties resistant to EFB brought optimism. “The growers never lost hope,” said Mehlenbacher. “With 99 percent of the nation’s crop being grown in one region of one state, growers realized that there was a lot at stake. They continued to tax themselves to support my breeding program with their money. Now they’re seeing the returns on that investment.”
Mehlenbacher says European hazelnuts, which are grown commercially, have a fairly narrow range of adaptation. “The next area within the United States where I think hazelnuts have a chance to be grown is in the fruit belt, from Virginia and Pennsylvania to New Jersey and New York, or in areas of Michigan that are major fruit producers,” he said. “Not too far from large bodies of water, not too hot or cold. The limitation is EFB. But I think we have good genetic resistance to EFB, and we will be able to develop resistant varieties that perform well in that fruit belt.”
Other than the EFB problem, hazelnut cultivation is relatively uncomplicated in comparison to other orchard crops. Hazelnuts are sometimes prone to bacterial blight, caused mostly by Xanthomonas, which is fairly easy to control with copper sprays. “The major insect pest in the Willamette Valley is the filbert worm, which is a moth larvae somewhat related to coddling moth,” said Mehlenbacher. “It’s an insect native on our Oregon white oaks, and when hazelnuts were planted, the moth found them quite tasty. But those are controlled through pheromone traps and timed insecticide applications. Some years no spray is necessary. In other years one spray is used, sometimes followed by a late-season application. Less harsh approaches to control the filbert worm include Neem extract and insect growth regulators.”
Mehlenbacher has been working with extension horticultural entomologist Dr. Vaughn Walton toward growing hazelnuts with minimal pesticides, but EFB continues to challenge their efforts. “The fungicides work,” he said, “but only so-so, and eventually the trees die. We hope genetic resistance lasts longer, but time will tell.”
Growers can select from about 12 hazelnut cultivars and 12 pollinizers. In addition to ongoing work on EFB resistant cultivars, work on suitable pollinizer species is also underway. “We have released a series of pollinizers so that growers have options to plant with released cultivars,” said Mehlenbacher. “The standard planting distance for hazelnuts is 20 x 20’ since most sweepers and harvesters are that size. Given that spacing, the standard placement of pollinizers is every third row, every third tree. Some growers have tried reducing that number, and sometimes suffered yield loss. We recommend three different pollinizers that shed pollen at different times to be sure there is compatible pollen throughout the bloom time of the females of the main variety.”
One notable piece of information that Mehlenbacher has learned, especially since the release of Jefferson in 2009, is the resistance gene in all of the recent releases does not give 100 percent resistance. “In some trees, under ideal conditions, small cankers can develop,” he said. “If the canker is small enough, it can be pruned out. If the canker is on the main trunk, sometimes the tree can regenerate through a sucker. If the canker is on main trunk and extensive, dig the tree out and replant.” Mehlenbacher added that vigilant growers can spot signs of EFB, especially in the first few years during pruning and scaffold selection.
Mehlenbacher continues to work on new varieties and new pollinizers. Most new cultivars have been developed by micropropagation — shoot tip cultures in containers in the lab — and those are the resistant cultivars. “We have about 40 different sources of parent material with resistance to EFB to use in the breeding program,” he said. “They may not be different resistance genes, but they come from different places. The fungus at some point will change and we want to have other resistance to use to control the pathogen.”
Ongoing work to expand hazelnut production in other areas of the nation is underway with partners at Rutgers University, the University of Nebraska at Lincoln and the National Arbor Day Foundation. The long-term research focus is on hybrid hazelnuts — crosses between the American hazelnut and the European hazelnut — which should combine the yield, quality, disease resistance and climatic adaptation.