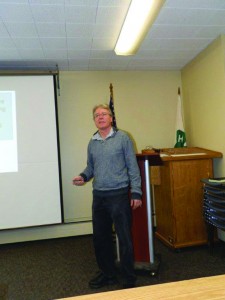 by George Looby, DVM
With the massive clean-up effort following Storm Charlotte not yet complete, the Extension System of the University of Connecticut was able to avoid postponing the first of two programs for bedding plant operators on Thursday, Feb. 14 and go on with the show. The Tolland County Office of the Extension System in Vernon, CT was the setting for the first meeting. The same program was offered to growers west of the river on Feb. 20 at the Litchfield County Extension Center in Torrington.
Dr. Jude Boucher, UConn Extension Educator, gave a review of late blight in tomatoes. Early recognition of the problem is critical if there is to be any hope of control. With some of the newer fungicides, together with good cultural practices, effective control can be accomplished, but when weather conditions favor fungal growth, control can be a battle. Two suggested fungicides are “rainman” and “canos” at ten day intervals. Plant breeders are hard at work developing varieties that have a degree of resistance and/or tolerance to the disease.
A host of innovative ideas have emerged as the movement towards long or extended season production has evolved. Many growers have found that hydroponic production meets their needs very well, with some growers fabricating their own systems rather than purchasing manufactured systems. Some farms are using movable high tunnels. Rain gutters closed at each end are also being used very effectively for growing plants.
Dr. Richard McAvoy, Professor of Plant Science at UConn, gave the audience some guidelines on controlling atmospheric moisture environment in a greenhouse. There is a factor called VPD or Vapor Pressure Deficit which is a measure of how rapidly moisture leaves plant foliage. This measurement takes into account both temperature and humidity with a range of 8-10 considered ideal. If the factor becomes too high it is necessary to increase the amount of moisture in the atmosphere by fogging, evaporative cooling or shade.
Dr. McAvoy presented an update on the use of chemical plant regulators. A product formerly labeled as Atrimmec is now sold under the name Augeo. The number of plants for which it is now recommended has been increased and application rates have been modified. Another product for which there has been an upward revision of species covered and rates of application modified is marketed under the name TopFlor. The granular form of this product can be used on many of the same plants as the liquid form but not on bedding plants or plugs. In addition there are specific limitations on the amount that can be applied annually on a per acre basis.
The way in which plants grow normally will determine whether to use Plant Growth Regulators (PGRs) under any given  condition. PGRs are most often used to retard stretching and there are several factors that may foster this undesirable growth pattern. Crowding is high on the list of practices that favor stretching, as are high daytime temperatures, abundant water and fertilizer and holding plants beyond their prime. Once plants begin to stretch, they are difficult to control regardless of the method one might use to control it. Any control measures must be put in place before stretching begins. When plants begin to touch stretching will begin, so proper spacing is very important.
When PGRs are used, it is a good idea to leave a few plants untreated in order that the effectiveness of any given program can be evaluated. From a practical standpoint, Dr. McAvoy offered some suggestions to be considered in any operation. Consistency is the key word when applying PGRs. He suggested that one person should be assigned the job of applying the material. He further suggested that applications should be made at the same stage of plant growth in succeeding crops, that volume applied be consistent and that applications should be made under similar environmental conditions.
Dr. Wade Elmer, Plant Pathologist at the Connecticut Agricultural Station, gave an update on emerging diseases and new fungicides for spring crops. Dr. Elmer first explained the differences between water molds and fungi. Water molds cause powdery mildew in some plants and it is important to differentiate one from the other as the effectiveness of a particular retardant will vary between the two. Expert help is usually necessary to identify which organism you are dealing with, so seek assistance from your local extension office when in doubt.
One of the emerging diseases predicted for the upcoming season is downey mildew in Impatiens. Current predictions are that there will be up to 70 percent less impatiens grown in Connecticut this year due to this emerging problem. Alternatives have been suggested to replace Impatiens this year, one of which is New Guinea Impatiens, which appears to be resistant. Other alternatives suggested include Coleus, Begonia and Lamium. This is not to suggest that these varieties are free of problems but in so far as downey mildew is concerned, they may work. Among the newer fungicides suggested were Adorn, Camelot O, Disarm 480SC, and Incept, each with a rather specific range of activity tailored to the control of certain select conditions. Others are on Dr. Wade’s list and should be investigated to make all involved familiar with their range of activity.
This program provide much detailed, very specific information that should serve to the needs of those in attendance as they prepare for the upcoming season.