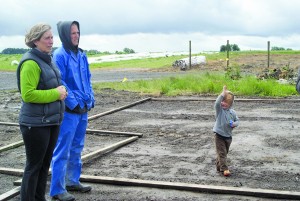 by Emily Enger
When Michael and Chris Bernards began their farm in McMinnville, OR in 1975, their original plan wasn’t quite what ended up happening. Michael grew corn and Chris intended to be a typical farmer’s wife. Then she started selling some of their corn in the neighborhood, literally out of the back of a pickup truck. The corn became more popular than the couple was expecting.
“They didn’t really have a plan,” recalled their son, A.J. Bernards. “She sold corn in summertime, then added tomatoes, squash and cucumbers, and just kind of grew and grew and grew.”
The farm — now run with the help of their sons, A.J. and Marvin — grew into their current 500 acres, diversifying not only to other vegetables, but also fruits and a floral nursery.
The nursery came as an idea to help pay for their six greenhouses and to help expand the season. A.J. explained, “If you only have vegetables, you don’t start your season until the middle of July. We figured since we had this greenhouse, we might as well be using it more.”
Bernards Farm considers themselves “in between” conventional and organic growing practices. They use sustainable methods, but aren’t officially certified organic. “But most of the farm-direct produce is grown without the use of chemicals or fertilizers,” said A.J.
Their major crops still include corn, but also apples and hazelnuts.
They have 18 acres of hazelnuts currently in production and grow a variety called Ennis, which is very large in size and has a lot of flavor. Its downside? It’s a variety very susceptible to disease, especially fungus.
Bernards combats this susceptibility by treating the bush more like a tree. “If you treat it like a tree, you can prune it more easily to allow for airflow,” explained A.J. “In bush form, you don’t get the airflow. But the airflow is what helps mitigate fungus and disease.”
The apples are a new venture for Bernards after purchasing an orchard last year. Their biggest seller is Gravenstein apples. The popular Pacific Northwest apple begins tart, but sweetens as it ripens.
That trait makes it a popular baking apple. Many Bernards Farm’s customers turn it into applesauce, because the sauce will have a mix of both sweet and tart flavors.
“The apples have been fun and I’m learning a lot. But I’m learning that my vocabulary is limited in describing them. I need to do more research on how to describe apples to people, because they always ask questions.”
A.J. has discovered that the typical sweet versus tart adjectives just aren’t enough for the serious apple eater and baker. “They are always saying ‘Yes, but how sweet is it?’ and ‘How does this one compare to a Honey Crisp?’ and other questions. I’ve always had a good palate, but having to put it into words for people is a new experience.”
Bernards has a farm store on their property. They grow most of their own products, but sometimes bring in what they can’t do in an effort to stay a ‘one stop shop’ for customers. They also sell at two local farmers markets.
The McMinnville area is home to many farms, with a supportive community. “There seems to be plenty of business for all of us,” said A.J. “Most farms have slightly different offerings and it’s great to live in a community like that. I feel like having more farms in the area is a benefit because customers get more options and there’s something for everyone.”
The community has shared in its struggle for labor, especially fruit farmers. “We typically use migrant labor for picking strawberries,” said A.J. “That’s been extremely difficult to find in the past few years.”
As immigration reform debate has heated in the country, border control has tightened. And visas into the U.S. have become very expensive.
“We’d love to pick our strawberries three times but because there’s so few laborers, we sometimes only get one. And this year, a friend of ours had to flat-out ignore some of his crop because he just didn’t have the labor to pick it.”
Bernards has used non-migrant labor but, as A.J. explained, “In a lot of cases, it’s just not a great job for some people because they’re not as fast.” Many migrant workers are familiar with farm work and have done it since childhood. It makes them incredibly fast pickers. “Some can make a couple hundred bucks a day ‘cause they’re so fast. These other people, who haven’t done it in years, or ever, try it but at the end of the day, don’t make as much money on it ‘cause they just don’t do it well.”
Currently, Bernards Farm faces a challenge that is a mixed blessing: growth. “We’re trying to figure out the best way to deal with growth. The best way to manage the field, and labor, without increasing costs. To make it beneficial for everyone.”
The growth has certainly changed things at Bernards Farm, but their origins remain a staple part of the business: customers still know them for their excellent corn. “We always have the first corn of the season,” said A.J. “And the last. We’ll have corn all the way into November, usually.”
It isn’t sold out of the truck box anymore, and it’s accompanied by a plethora of other offerings, but Bernards Farms’ sweet corn is still a McMinnville area favorite.