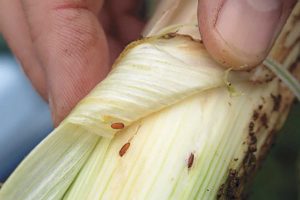 by Steve Wagner
How does a plant pest whose existence was not chronicled before 1858 in England, cross the Atlantic Ocean 158 years later to land on a farm in Lancaster County, PA? That is the travel history of the allium Leaf Miner. This pest, native to Poland and Germany, first spread across Europe into Turkey, Russia and Asia during that time span. “One possibility is someone bringing garlic over,” says Penn State Extension Specialist Tim Elkner. “The pupa might have been down amongst the cloves. Certainly, it could have been brought in with leeks or onions. It’s just that this is not typically the kind of thing that would be transported around. Probably it was not an insect — most likely a group of them in order to start the population. You need male and female in a bunch, so it might have been like an infected shipment of garlic or something was sent over.”
According to a ‘Pest Alert’, which Elkner helped to draft, the allium leaf miner has been reported to infest species in the genus Allium. Leeks (A. porrum) tend to be described as the most damaged host, which may be influenced by the timing of the second generation and the planting of leeks. Infestations have also been reported in onion (A. cepa), garlic (A. sativum), chive (A. schoenoprasum), shallot (A. cepa), and green onion (A. fistulosum). There are many ornamental species of Allium, some wild species are common weeds, and at least one species is endangered (A. munzii in California). Current literature varies in reporting damage in ornamental and wild Allium spp. The full host range is unknown.
Elkner says in order to get handle on the situation you are going to have to scout for it in your crop. “The PA Ag Department is doing some survey work to see how widely dispersed the insect is, trying to get an idea of where it is. The expectation is that the farm where it was discovered is not the only farm. There are indications that there are other farms,” though it has not been reported in adjoining counties or adjoining states. What has to be done next is to take appropriate measures depending on crops affected. Wavy, curled and distorted leaves are signs that the allium leaf miner might be present. Adult females make repeated punctures in leaf tissue with their ovipositor, and both females and males feed on the plant exudates. Leaf punctures arranged in a linear pattern toward the distal end of leaves may be the first sign of damage. Larvae will mine leaves, and move toward and into bulbs and leaf sheathes where they pupate. Leaf miners are most evident in species with thin leaves such as chives. In species with larger leaves, it is often necessary to peel back the leaves to find the insect. Both the leaf punctures and mines serve as entry routes for bacterial and fungal pathogens. High rates of infestation have been reported: from 20 to 100 pupae per plant, and 100 percent of plants in fields. The literature suggests organic production and market garden production systems tend to be most at risk, perhaps due to insecticidal control in conventional production systems.
To help stave off this pest, says Elkner, “Depending on the size of your plantings it might be possible to use something as simple as a row cover to just flat out exclude the insect. For larger plantings, that is not going to be possible, so it will involve some kind of a pesticide application.” The Pest Alert suggests that ‘systemic and contact insecticides can be effective. EPA registrations vary, however, among Allium crops. Check labels to ensure the crop is listed, and for rates and days-to-harvest intervals.
On the Richter scale of true pests, “It’s going to be a true pest, if Allium crops are involved,” Elkner maintains, “We’re just going to have to see the extent of the spread of the insect. The literature is not totally clear; it seems to feed on all sorts of different Alliums, but the question is what level of damage is there in terms of these other crops? If you look at chives, they are an Allium, but what’s the level of damage there? So we have to observe the insect to see what the effectiveness of the insecticide is that we expect will work on them.” Assuming that the problem might be worse in England due to their heavier growth of leeks and onions, Elkner adds, “They are limited as to their options in terms of chemicals to control the pest. The main thing I was finding on-line with the little bit of research that I did is that most people have gone to the use of row covers, particularly for their fall leeks. That has been the only thing that’s allowed them to continue to grow them.”