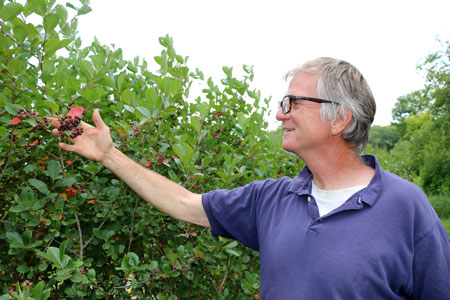 Sam Perkins with some of the Aronia berries grown at Bug Hill Farm in Ashfield.
Photos by Laura Rodley

When people come to Bug Hill Farm, a 42-acre farm in Ashfield, MA, for certified organic berry picking, they are encouraged to make an afternoon of it, to bring a picnic lunch and stroll on trails through giant native blueberry bushes to a large pond.

Owners for the past two years Sam and Charlotte Perkins have continued to grow berries and make cordials, conserves and fruit shrubs, such as Strawberry-Rhubarb Shrub, following recipes developed by the farm’s former owner, Kate Kerivan.

“Conventionally-grown berries are notoriously full of pesticides,” said Charlotte. A following of dedicated black currant pickers have been making an annual pilgrimage to Bug Hill Farm for 10 years to pick their own berries.

Black currants, both fresh as U-pick and in products, are Bug Hill Farm’s niche market. The farm has 500 black currant bushes covering a half-acre, with some bushes several decades old. “Over the past two years, we have increased our plantings by about 250 bushes, which we propagated from our own stock,” said Sam. Ripe black currants last a couple of weeks on the bush and are harvested from mid-July through mid-August. The bushes require extensive pruning, which the couple does in the winter, removing about one-third of the growth.

In addition to currants, Bug Hill grows raspberries, elderberries, blueberries, gooseberries and aronia. From early black raspberries to late-bearing raspberries grown in a high tunnel, berries of some kind are available from mid-July through October. Aronia, also known as chokeberry, resemble black currants and factor higher on the nutrient scale with more antioxidants and polyphenols than blueberries.

“Birds don’t like aronia berries, and they are an acquired taste for people because they are so tart. I put them in my smoothies,” said Charlotte. Even the aronia berry even seems to find itself sour, as the berry is puckered on the bottom, rather than rounded like other berries. And while birds don’t like either aronia or black currants, they do love elderberries, a perennial harvesting challenge. “We often harvest partially-eaten clusters; when the birds start eating them, we know they are perfectly ripe,” said Charlotte.

Sam and Charlotte have not yet netted any of their berry crops but are considering netting the elderberries. “Our goal for blueberries, however, is to have so many that we have enough for the birds and ourselves,” said Sam. The birds appear to devour the native blueberries first, then move on to eat from the cultivated acre of 900 blueberry bushes that Kate planted five years ago. 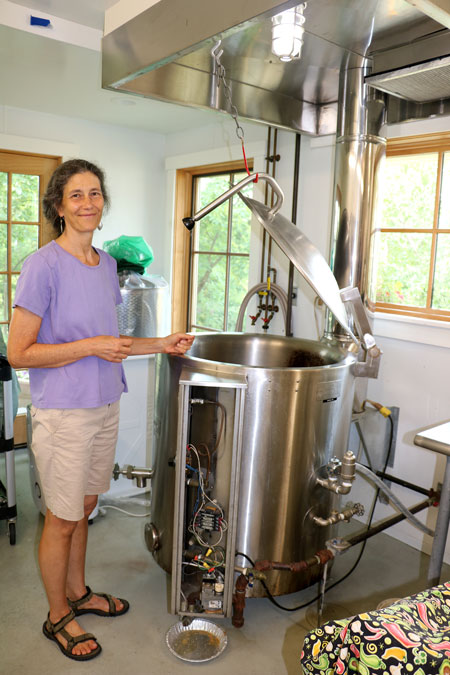 Charlotte Perkins by the kettle in the commercial kitchen where the cordials and shrubs that they sell at Bug Hill Farm are made.

“We will probably harvest 500 pounds of berries,” said Sam. “Our goal is to have our own berries fulfill 20 to 25% of our production needs.” To make their products, they supplement with other berries, buying as much organic fruit as possible. They also use organic sugar, but their products are not fully organic. Ultimately, they would like to make a completely organic product, but “at our scale it’s tough to source all organic berries and organic vinegar,” said Charlotte, which they use for making their shrub drinks. It would also raise the price.

To make Kiss of Cassis Black Currant Cordial, the farm’s signature product, Sam and Charlotte press 200-pound batches of black currants in a cider press. “There is a pound of black currants in every bottle,” said Charlotte. For the shrubs, the fruit is soaked in vinegar for 10 days, strained, sweetened with organic sugar or honey and heated in a large kettle. The couple manage the early stages of production but rely on two part-time employees, Terry Love and Marianna Starosielski, to complete the heating and bottling process.

The principal challenge for Sam and Charlotte is dealing with spotted wing drosophila (SWD), thought to have arrived in New England on the winds of Hurricane Irene in 2011. “It’s particularly bad for raspberries. We have to harvest them every day. That’s a challenge,” said Sam. They pick ripe berries each evening after the U-pick crowd has left.

“Within the certified organic protocol, you can spray, but we don’t,” said Sam. SWD deterrents include cultural practices such as extensive thinning of the canes to allow air flow and light to penetrate.

When they sell products at holiday markets and 15 various farmers markets or craft fairs, customers add their names to the thriving email list that came along with the business. They ship out online sales and supply 15 retail store accounts, and a couple of restaurants. Annually, they sell 300 cases of shrubs and black currant cordial, and 80 to 100 cases of jam and chutney.

Charlotte and Sam enjoy the variety of work that every day brings, from being outside pruning or harvesting to working in the kitchen and selling their products at markets.