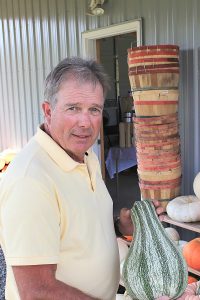 by Karl H. Kazaks
FANCY GAP, VA – Five years ago, Barry Iroler embarked on a post-retirement occupation, growing wholesale pumpkins, with no inkling that the operation would become a second career and a totally different type of business: a popular pick-your-own (PYO) pumpkin patch with a variety of family-oriented agritourism options.
Being from Carroll County – a major pumpkin-producing region – it was easy for Iroler to decide to grow pumpkins, specifically Aladdins that first year.
With a lot of research and preparation – including help from local extension agent Travis Bunn, from whom he borrowed a planter and some trailers – Iroler was ready that first year to plant and grow pumpkins.
What he wasn’t ready for were the customers who came up to his farm, asking if they could pick their own pumpkins.
But the seed was planted, and Iroler and his wife Barbara took that consumer cue and decided to become a PYO operation.
Today, the Irolers still wholesale a few trailer loads of pumpkins from their eight-acre patch, but they sell mostly off the farm. The farm has a retail store, where customers can chose already harvested pumpkins and gourds, but the large majority of the retail customers like to go out with loppers and a wagon and choose their own pumpkins.
They also like to participate in the activities available on the farm, which include a five-acre corn maze, corn cannons, hayrides, a children’s barrel train, a bouncy house and a playground.
“Families like to come up and make a day out of it,” Iroler said.
The farm offers an activity package, which combines admittance to the corn maze and participation in some of the other activities. There is tiered pricing that offers discounts for children, adults, seniors and military.
Blue Ridge Pumpkins is open on Saturdays and Sundays from the weekend before Labor Day (it is also open on Labor Day itself) through the last weekend of October.
This year, the Irolers installed a new building to serve as the operations center for the pumpkin picking and corn maze. Previously everything was run out of a converted machine shed, which this year is serving strictly as a retail and food service center. Customers love taking the food from the store’s kitchen to the picnic shelter the Irolers have built on their farm.
The retail building offers products such as soaps and lotions from a local producer, home cooked treats — including many that are pumpkin-based, including pumpkin pie, pumpkin cake, and pumpkin cinnamon rolls — and a coffee station which sells more pumpkin spiced lattes than anything else. Also for sale is honey from the farm apiary, which the Irolers installed this year. There are also decorative fall products such as Indian corn – grown on the outer rows of the corn maze – as well as shocks of corn, and mums purchased from a local greenhouse.
During the week, the farm hosts school field trips. In addition to picking out a pumpkin, students get to go on a hay ride and learn about various types of ecosystems – forest, field and riparian. Iroler will talk about the wildlife on his farm, and show images taken by his wildlife cameras.
Having the school tours on the farm is especially rewarding to Barbara, who is a retired elementary school teacher.
The farm is so busy on the weekends – with the largest subgroup of customers coming from North Carolina’s major metropolitan area – that in order to manage everything it takes a dozen workers, including a lot of family.
“I couldn’t have done any of it without my family,” Iroler said. In addition to Barbara, sons Barrett and Clay help out with the operation, as well as daughter and son-in-law Mandy and Zac Lineberry. Barrett’s wife Brittni is also involved. Among other things, she knits the winter hats available for sale at the farm.
Going from a public job to a pumpkin farmer isn’t quite the retirement most people make. “I think I just switched jobs,” Iroler put it.
The difference is, he added, “now I go out my back door and look out over my office.”