Blueberry picking and getting ready for Christmas 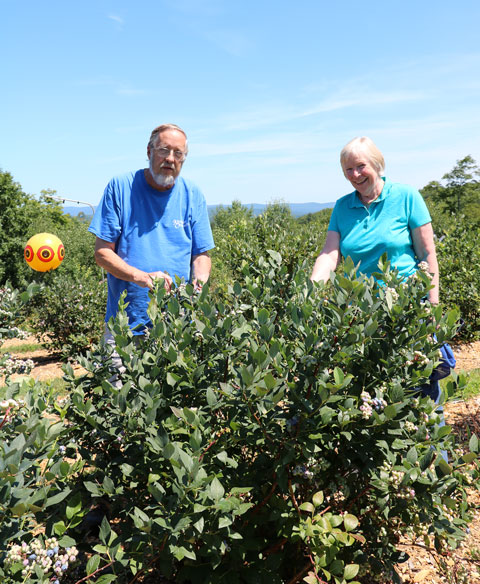 Larry and Susan Flaccus of Kenburn Orchards in Shelburne with some of their blueberry bushes.
Photos by Laura Rodley

People can enjoy a real country experience when they visit Kenburn Orchards and pick their own high bush blueberries or, later in the year, return to choose and cut their own Christmas tree.

While picking blueberries, they might receive a discount coupon for their tree during the holiday season, and vice versa. Owners Larry and Susan Flaccus have found this co-marketing to be very useful. They put seasonal ads in the local newspaper and are members of the Greater Shelburne Falls Business Association. Others hear of them through word of mouth and they have a strong Facebook following.

“Most of our people are repeat customers,” said Larry from the gazebo that overlooks distant mountains and two acres filled with the 1,500 blueberry bushes the couple planted after they moved to the farm. Susan inherited the farm located in Shelburne, MA in 1998. It had been in the family for nearly a century. “Blueberry people say, ‘I come here for my Christmas tree,’ and it goes back and forth,” he added.

For the Christmas tree operation, Susan said, “We provide hot mulled cider and homemade cookies.” It’s a holiday tradition people can bank on.

Her grandfather Kenyon Yale Taylor bought the 160-acre farm in 1924. It has gone through incarnations as a dairy and an apple tree orchard. Susan was born at the farm, and the family moved when she was seven. Shortly after she returned to the farm, she and Larry had a barn built using hemlock grown and milled in nearby Charlemont. Their farm pond is used to irrigate the blueberries.

Dispersed amongst the eight varieties of blueberry bushes are shiny CDs hanging on fishing wire flapping in the wind, brightly colored big balloons with large “scare” eyes and moving mobiles, all intended to scare off birds. “Our berries are so good, the birds can’t stay away,” Susan said. “Nothing discourages the birds. Digitalized bird calls of predatory birds, windmills, eyes don’t work.” Neither did applications of methyl anthranilate (MA), a grapeseed extract that irritates birds’ nasal cavities and throats (the way chili peppers or cutting onions bothers people).

“MA interferes with the birds’ receptors, give them scratchy throats, but it still doesn’t keep them away. Cedar waxwings are very difficult to control. There are more birds this year,” Susan said. “We’ve sold nearly as many as the birds have eaten.”

Using netting is a no-go. “We are not in a good position to net on a slope. People come up here for the experience of being up here as much as for the blueberries – they don’t want to be picking berries under a net,” said Susan. Plus, breezes don’t flow under the net, so it gets hot. 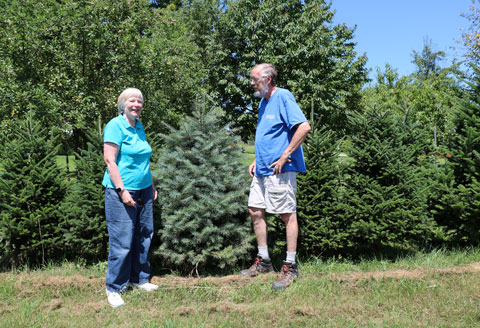 In addition to their summertime blueberry business, Susan and Larry Flaccus of Kenburn Orchards grow Christmas trees for the winter season.

The blueberries are raised using integrated pest management, although Larry has a Massachusetts pesticide license. They do hand weeding and use wood chips to control weeds. They pick up a lot of fallen berries. Since they began raising blueberries, their crop has been affected by “mummy berry,” a condition caused by a fungal pathogen that leaves the berries shriveled. “It’s been going on a long time. It’s a pretty serious fungus,” said Larry. The fungus has a two-year cycle and overwinters in the chips. To discourage the fungus from spreading, they pick up mummified berries by hand, freeze the berries and dispose of them at the dump.

The three acres planted in Christmas trees are filled with a variety of balsam, Fraser, Concolor, blue spruce and Fralsam™, a Fraser/balsam cross. They do not use pesticides on the trees. They prune them into the traditional Christmas tree shape and keep them fertilized. “We take the vines out; we don’t spray them,” said Larry. “It’s all choose and cut. It’s one price for any size tree.”

They start selling Christmas trees at Thanksgiving. They hire four to five part-time workers to help out at Christmas and to do summer mowing and pruning. They do a lot of mowing to keep the grass down. They have no problem with ticks because they keep the fields mowed and ticks like tall grass, noted Larry.

The owners are members of both the Massachusetts Christmas Tree Association and the Massachusetts High Bush Blueberry Growers Association. “Membership is these associations provides a way to learn from other growers as well as to share best practices through twilight meetings at member farms. We earn back every penny in dues from the knowledge we gain,” said Larry. Kenburn Orchards has hosted both associations for twilight meetings. They also donate to local agricultural societies and non-profits.