Bouncing back from boxwood blight 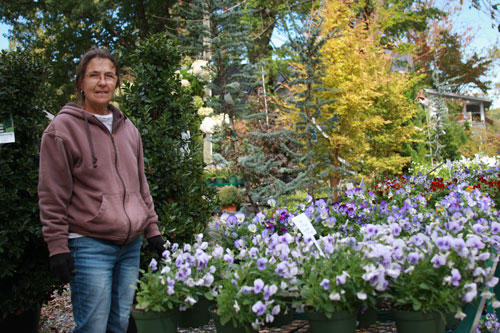 Martha Dudley, Rainfrost’s manager, has been on the job for 20 years. “I always hope to order the right things,” as new plants come on the market and consumer tastes change like the fashion market, she said.
Photo by Rebecca Jackson

Rainfrost Nursery, located in historic New London, VA, has successfully met a number of challenges above and beyond the usual commercial and residential market competition.

First came a devastating boxwood blight that destroyed much of the American and British boxwood stock in central Virginia, some of the plantings said to be at least two centuries old. It continues to be a problem with homeowners in nearby neighborhoods, where careful steps (cleanliness and destruction and disposal of diseased plants) must be taken to prevent its spread.

In April 2018, a rare tornado wobbled perilously close to the 35-year-old nursery, garden center and landscaping service, wiping out a number of businesses just down the road, longtime enterprises that are gradually recovering from the storm.

This summer and into autumn, drought struck the region. Previous episodes of dry weather prompted Rainfrost’s owners to install an irrigation system fed by a public service authority, replacing hand-dug farm wells that depended on electric-powered pumps. A derecho, a fierce straight-line windstorm that roared down from the upper Midwest, knocked out power to those wells for several days one recent year.

Martha Dudley, Rainfrost’s manager, has been on the job for 20 years. She and her small staff are a hard-working crew of women in their fifties and older. They keep the nursery founded by owner Steve Wilkerson on his old family farm in top shape, with a legion of repeat customers who depend on their knowledge and the quality of their stock.

“Trying to find help, particularly younger people that will stay with us, is a big challenge,” said Dudley.

Their biggest challenge, the boxwood blight, is believed to have originated somewhere across the Atlantic. It hitched a ride here via cargo ship, spreading concern among homeowners and nurserymen alike. Boxwood blight is caused by the fungus Calonectria pseudonaviculata, a serious disease that results in defoliation and decline of susceptible boxwood. In Virginia, the blight was first identified in a nursery in Carroll County in 2011. By 2013, it was in other commercial and retail operations and in several landscapes in Virginia. Once introduced, boxwood blight is very difficult and costly to control with fungicides, usually resulting in the destruction of plants. Spores can be spread on pruning tools, equipment, clothing and anything that might come in contact with infected plants.

“So many customers are looking for something else to plant, something that is resistant” to the blight, said Dudley. “This has been our biggest challenge in the last two years. As a result, we do not sell English boxwoods. This area got hit by the blight very hard.” She added everyone needs to practice good sanitation to prevent spreading it, going as far as workers wearing hazmat suits when removing and destroying infected vegetation.

“I’ve been on the edge forever with that. It has been very nerve-racking, as I have a lot of boxwoods here,” she said.

Rainfrost boasts an expansive inventory of statuary, decorative pots and garden-related gift items, all of which are attractively displayed to catch customers’ eyes. A bungalow on the property doubles as a gift shop and office in which Dudley works amidst crowded displays and catalogs. The staff also does commercial and residential landscape design and installation.

Unlike many plant nurseries in the region, Rainfrost, with thousands of plants, does not close for winter. Staffers leave anything deciduous and cold-hardy, such as roses and spireas, in the woods sheltering the business, blanketing the surrounding ground with a thick mulch of leaves. Broadleaf evergreens are moved to unheated hoop houses, which help them by keeping the wind off plants. Winter is inventory and planning time, with great effort put into research and sign maintenance and repair as well as ordering new stock for spring.

With legions of avid gardeners and hobbyists, many central Virginia customers return year after year to replenish their properties from the nursery’s bountiful selection of trees, shrubbery, decorative annuals, perennials and vegetable plants.

“I always hope to order the right things,” and new plants come on the market and consumer tastes change like the fashion market, said Dudley. Her favorites remain boxwoods, hydrangeas and yews. Plant trends start on the West Coast each year and spread across the country, she acknowledged.

Popular right now are hydrangeas, the color of their blossoms influenced by the acidity or alkalinity of their soils, obsession nandena and perennial replacements for boxwoods killed by the blight.

Like any other agricultural enterprise, nurseries are at the mercy of Mother Nature, said Dudley.

“You have to make sure you love it before you do it,” noted Dudley, who came to the nursery simply because she needed a job; it was not something she initially trained for. “It helps to make sure you like to be outside in all kinds of weather, including in the summer when it’s 90 degrees with mosquitoes as big as birds, which are terrible here, or 30 degrees with a cold wind blowing in the winter.”