Bountiful color through the seasons 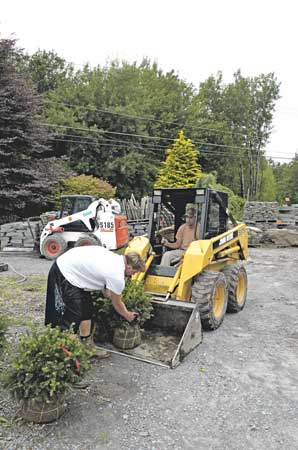 Visitors to Rogers’ Nursery on any given day through the growing season are treated to one of the most beautiful yet understated selections of perennials, shrubs and trees in the region.

The Dallas, PA nursery is tucked away and not easily visible from the road, but since operating the business from their home in 1998, Herb and Danielle Rogers have made a name for their nursery.

Danielle was introduced to the nursery business when she was working at another nursery in the area. She met Herb, who had a small nursery and was looking for an assistant manager. Danielle took the job and says her job was mostly to water plants.

“It was real small,” said Danielle as she described the scale of Rogers’ Nursery when she started working there. “I got the job at the other place because I liked plants and it grew from there. I was so interested in plants — I remembered everything I picked up and it was fun.”

Today, Herb and Danielle work as husband and wife, and a major portion of the business for their nursery is providing unique and interesting plants for local landscapers. But they’ve also developed a strong retail following. “We started off selling plants wholesale to landscapers, then our popularity grew,” said Danielle. “Now we have a lot of homeowners and retail customers coming in. People started to find us by word of mouth and we expanded our retail.”

Although Rogers’ doesn’t sell hanging baskets in spring, Danielle says that depending on the weather, the phone usually starts to ring around the second week of March. “People ask about prices and availability,” she said. “We live here, so if someone wants to come and look at something, we can open up.”

Once the weather warms up and landscapers start to work regularly, Rogers’ is a busy place. Some of the stock is grown on the property and more arrives throughout the season. The nursery is full of color, with plants arranged so customers experience a lush wall of color and greenery.

Danielle explained that because the nursery started behind the house and expanded over time to include more of the property, arranging plants was a natural part of that. “Herb and I figured out where people would be walking,” she said. “We didn’t want to block their vision. It also depended a lot on the irrigation — where we could get more water for the bigger trees. We evolved slowly, so we were able to do a lot of trial and error and figure it out as we went.”

The entire selection of stock is irrigated and while Danielle says the sprinklers often run throughout the night, some plants still need to be hand watered. As for keeping so many plants and trees adequately watered so they always look their best, Danielle says the entire crew keeps an eye on the stock to make sure nothing looks as if it needs water.

“It’s a combination of people willing to work, and Herb keeps an eye on what needs to be watered,” said Danielle, commenting on their work crew. “Everyone checks the plants. Everyone who works here is outdoorsy, or they’ve grown up on a farm. Everyone knows the plants have to be watered, cleaned or moved.”

Danielle admits that the busy season can be a bit overwhelming, with landscapers looking for just the right plants for customers. “We do a pretty good business through summer,” she said. “When landscapers get behind, they have to install all summer.” Although Rogers Nursery had an in-house landscaping crew at one time, the business grew to the point of eliminating that service.

Herb handles ordering for the nursery, based on what people want and what looks nice. “There are a lot of stand-by ‘go to’ shrubs,” said Danielle. “We always have those. We do a lot of planting ourselves and bring other material in. We only want plants that are prime.” Danielle says their suppliers provide information on new perennials and shrubs, which helps them decide what to offer. “It’s important that plants are cold-hardy for our area,” she said. “We don’t want to sell anything that won’t winter over. Sometimes a customer is set on a particular plant we don’t have, so we try to find a suitable substitute.”

Trees are a big seller and Rogers’ stock includes a good selection of 3” caliper trees for landscapers and homeowners. “Sometimes people will come in and measure the ball, then dig a hole,” said Danielle. “When we deliver, we’ll put it in the hole for them. That seems to work out well for people. We also have smaller trees in pots.”

Rogers’ Nursery offers fruit trees for home gardeners and also has a selection of blueberries, raspberries, rhubarb and asparagus. “People come in here excited (about growing fruit), so that’s good,” said Danielle. “We let them know that wildlife can be a problem, but for the most part, people do some research and come in with a good idea of what goes into growing fruit.” Retail customers can also shop for seeds, garden tools, hoses, gloves and bird netting.

Rogers’ keeps a list of plants that deer don’t like, and sometimes nursery stock will arrive with a deer-resistant tag. “A lot of it is trial and error,” said Danielle. “Some people will swear a deer doesn’t eat something, and the next customer tells us ‘the deer ate it all.’”

While business is steady through summer, Danielle says there are fewer customers in late summer. “Then around the beginning of September, people start thinking about planting in fall landscapes [and] are still coming in,” she said. “Some landscapers purposely don’t do anything in summer but they’re here in fall.”

Fall selections include an assortment of pumpkins and gourds, mostly decorative and available for sale but not a major portion of their business. “Because we started off as a wholesale nursery and we’re off the beaten path, people don’t think of us for seasonal items like mums,” said Danielle. “We don’t do a big push on those.”

Danielle says while Rogers’ isn’t known for mums, they do carry some for those who request them. She added that it’s hard to gauge how many mums to bring in because they don’t sell consistently from year to year. “If we don’t have them, people can get them somewhere,” she said.

As Christmas approaches, the Rogers bring in greenery for the wreaths Herb creates. He makes a selection of standard wreaths in variety of sizes, but has also made 5’ blue spruce wreaths. Wreath making starts right before Thanksgiving and they are sold either as is or with decorations. “We sell some wreaths here at the nursery,” said Danielle, adding that most wreaths are sold wholesale to local retail establishments. “We’ve also done wreaths for fundraisers.”