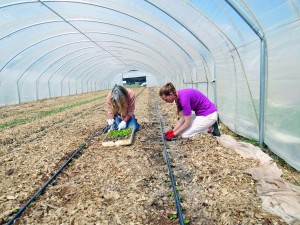 by Sally Colby
Farming in Smoot, WY, has its challenges. At 6,500’ elevation, only 45 frost-free days and a list of customers who are as far as 90 miles away, Shain and Tara Saberon have to plan carefully to make sure that they can deliver fresh produce to the 50 CSA shareholders they service.
EverGreen Farm began operating about 10 years ago when one of Shain’s friends was farming and wanted to start a CSA. “He was hesitant to do it on his own, and he knew I was an avid gardener and grew a lot of food,” said Shain. “I was hesitant to go into a business because I was a gardener and not a farmer. But he assured me that he’d help and guide me along the way, so we started a CSA.”