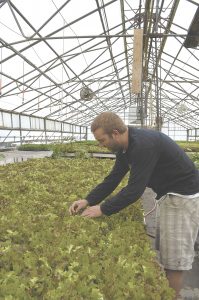 by Sally Colby
If anyone had told young Will and Lucas Brownback that they’d return to the Perry County, Pennsylvania farm their parents Mike and Terra started in 1978, they wouldn’t have believed it.
“We couldn’t wait to get out of here and go to college,” said Lucas, recalling how he and his brother were anxious to leave the farm. “We both went to school in Philadelphia, then realized that our parents had something good going on here and that it was the right thing for us to do.”
Spiral Path Farm is clearly headed in the direction Mike and Terra had in mind when they purchased the 250-acre property in 1978. After using organic practices and initiating a small CSA, the farm became certified organic in 1994.
Today, Spiral Path Farm’s CSA has grown to 2,500 shares, which comprises about half of the farm’s business. The rest of the produce is sold at several farmers’ markets in the Washington D.C. area and to a major grocery chain.
Spiral Path Farms’ 36-week CSA means that many crops are started under cover for transplanting outside, while other crops are grown under cover from start to finish. The six greenhouses on the main farm are maintained at various temperatures to suit each crop, and irrigation systems ensure adequate water at critical times.
Lucas discussed the benefits of the boom sprayer in one of the greenhouses. “It really helps the crop with precision watering,” he said. “It can be programmed to water to meet the needs of different plants. We have two wells on the farm, but can only run one boom at a time. The greenhouse manager determines the priority for watering.”
Since the farm is certified organic, IPM is a critical aspect of overall management. Lucas explains that one aspect of the farm’s IPM program includes the use of banker plants. Each flat of 200 lettuce seedlings includes one cell of alyssum, a plant that provides a haven for beneficial predators. Marigolds are also used to attract thrips, which are food for predators.
Crop rotation also plays an important role in pest and disease management. “We rotate crops about every three to four years, and we use a lot of cover crops,” said Lucas, adding that cover crops are often maintained as permanent sod between tilled rows. “We’ll use rye, hairy vetch and crimson clover, and we fertilize the cover crops.”
The growing season begins in January, but none of the greenhouses are heated. Row covers in the houses help protect cold-sensitive crops throughout winter. Sweet corn, which is a popular CSA draw, is started in flats in the greenhouse. Each season, seven plantings of 200 flats each are started in succession to provide sweet corn in the CSA shares for as long as possible.
Eight, three-acre greenhouses on another farm nearby provide additional growing space for greens. After a head start indoors, seasonal crops thrive on raised beds covered with plastic. One farm structure is devoted to vermiculture, which yields nutrient-rich castings that are added to the soil mix made on the farm. Vegetable grade-outs turned to compost along with worm castings and minerals help create a soil mix that provides a nutritional boost for young crops.
Although the greenhouses are a valuable tool in extending the growing season, Will and Lucas prefer to grow crops outside whenever possible. “Tomatoes should be grown outside, in the dirt, from July through October,” said Lucas. “We want to grow tomatoes early for our customers, but we value good flavor.” Lucas added that they test new varieties each season, but usually end up with six or seven staples along with some heirlooms. After being started inside, tomatoes are transplanted and trained to a stake and string system.
Each season, significant acreage is devoted to winter squash, which stores well and can be included in CSA shares well after the growing season. Although the Brownbacks stopped growing orange pumpkin due to space, they’ve found success with Butterkin squash.
Spiral Path Farm grows several fruits and blueberries that are still being established.
Will manages the farm fields, packinghouse labor, wholesale organic produce sales, field and greenhouse seeding and growing, and soil health and fertility. Lucas’ responsibilities on the farm include CSA manager, farm markets manager, and transplant greenhouse grower and PR manager. He is enthusiastic about the farm’s CSA program and is determined to gain new members. “I want to try to get people who don’t really want a CSA,” he said. “But they might want to learn to cook, and I need to be their connection for that.”
To keep in step with their goal of operating in a sustainable manner, the Brownbacks installed a solar array in 2011. The electricity produced supplies all of the on-farm energy needs including coolers, fans and pumps; with excess power sold back to the grid.
The most recent project, and one that both Will and Lucas will be glad to have use of, is a new pack house that will double the space they’ve been using. The new facility includes ample space for offices as well as dedicated areas for washing, packing and storing produce. “We’re doing bigger onion sales, so we bought an onion line that will go in there,” said Lucas.
At this point, Will and Lucas have taken over most of the operation of the farm, but there’s one aspect of farm management they’re still learning about: the seeding schedule for winter. “We sit down in winter and figure out what we’re going to seed each week all the way through August,” said Lucas. “That’s something that takes years of experience.”
Visit Spiral Path Farms online at www.spiralpathfarm.com .