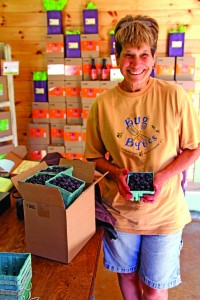 by Laura Rodley
The long driveway leading up to Bug Hill Farm’s Farm Store, attached to the edge of the main farmhouse in Ashfield, MA is lined with huge black-eyed Susans, delphiniums, echinacea, indigenous flowers and greenhouses. At the end of the driveway is a row of cars owned by people who have come to pick raspberries, blackberries, and currants as well as purchase specialty drinks created by farm owner Kate Kerivan, such as the concentrated Rhubarb Rush made with organically grown rhubarb, honey and ginger, or Black Currant Cordial made with honey. No water is added to either drink that doubles as a dessert syrup.

The farm is USDA Certified Organic, and provides its own honeybees as pollinators. Kerivan started her flourishing business in 2009, with her direction inspired by former owners of the property and what already was growing there. “I fell in love with currants in an old planter here on the farm, planted by a German doctor (a former owner). It was love at first sight. My background is in wildlife management. I wanted to have a successful business that worked well with all the wildlife already here that I love, using native and non-native berries, and turn them into wonderful healthy drinks.”
Well-known to the English palette, and used in jams and jellies, black currants are gaining popularity in United States, as they are five times higher in vitamin C than oranges, higher in antioxidants than blueberries and contain potassium and bioflavonoids.
Utilizing currants that already grew at on the property, Kerivan now sells gooseberries, currants, native hybrid blueberries on three of the farm’s 50 acres as a PYO berry business. She uses them as well as elderberry flowers to make nourishing vinegars and preserves available for purchase either on her website, local stores, farmers markets or her farm store.
Kerivan is busy talking to customers and friends who have dropped in at the farm store from New Hampshire. She has just finished selling at Saturday morning’s Ashfield’s farmers market. Manifesting everyone’s dream of being two places at once, she has someone else standing in for her, selling her wares at the same time that morning in Vermont: her helper, intern Ellen Green, who just graduated from Hampshire College in Amherst with a degree in Agriculture and U.S. Politics.
“[Kerivan] wanted me four months before I even graduated,” said Green, who lives in a trailer on the property, the lodging provided as part of her internship that lasts from May to November. She currently works in the commercial kitchen that was installed in 2012, making the preserves, orchards, and bakery, and is out in the field only in case of emergency, she said. She also travels to sell their products at farmers markets in Northampton on Tuesdays, and Somerville on Wednesdays.
What Green likes best about the farm is the scenery. “I’ve worked on a lot of farms; this is this is definitely the prettiest. It’s the first time I’ve worked with currants or gooseberries. They need cold, which is why I never dealt with them before. I’m from southern Massachusetts.”
Some of the currants only grow in zone 2, Green notes, and won’t grow in most other parts of Massachusetts. The farm supplies the right climate, with its elevation of 1700 ft. above sea level.
On Sunday morning, Kerivan is sitting on her front porch with her Australian shepherd, Alma while visiting with her long-time friend Catherine Skove. “‘Alma’ means soul in Spanish,” said Kerivan.
“Soul. That kind of sums up this place,” said Skove.