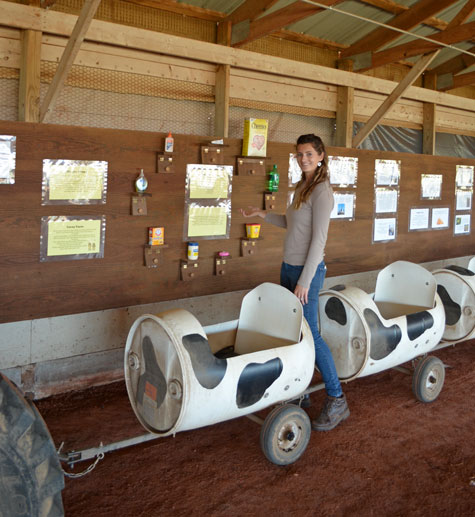 Farm learning stations in one section of a barn provide basic facts about farming.

It’s the end of the season and the last guests have enjoyed autumn activities at Winterbrook Farms, but owners Brandon and Taylor Huffman are already planning for next year. The Huffmans purchased the 327-acre hay and crop farm in Thurmont, MD, from Taylor’s parents’ estate in 2016, and are continuing the family’s farming legacy.

“We were the first in the area to create a corn maze,” said Taylor. “The first year my parents cut a perfect wagon wheel design with a skid steer, then we decided the maze should include a map and checkpoints to provide more for guests to do.”

In 2017, just one year after taking ownership of the farm, Taylor and Brandon did a major remodeling of the agritainment area. “We added more kids’ activities, removed a portion of the corn maze and put it into grass and more activities,” said Taylor.

The Huffmans’ goal each year is to plan at least one new attraction, but this year, their plans are even bigger. Taylor said she and Brandon wanted to make the best use of the investment, and decided to plant strawberries for 2020.

“It’s something I’ve always wanted to do,” said Taylor. “People come here and see all the things we’ve built and maintain all year. We’re only open on weekends in fall, so our plan is to have a strawberry festival in spring. We’ll open the activities and people can also pick strawberries. We’ll have strawberry-themed everything.”

Taylor and Brandon planted two acres of strawberries for the first year. They planted four varieties, all bare root, but a combination of less than ideal weather, time of year and possible disease issues resulted in crop failure. They replanted with plugs, which are doing well, but late-season replanting meant only two variety options, which will ripen about one to two weeks apart, were available.

Another aspect of the 2020 plan is to open an on-farm market. “We tested the farm market idea this year with two acres of sweet corn, which sold out quickly,” said Taylor, adding that fresh tomatoes were also a draw. “People were stopping by every few days for more. We have excellent road frontage so that helps a lot, and want to use that to pull people in as we expand.”

The Huffmans also grew sunflowers to attract customers. “We plan to start small and supplement with produce from other farms,” said Taylor, explaining the plan for the on-farm market. “I want to create a market with products from our farm, and also offer local products to support other area growers.”

Taylor said the majority of the farm’s seasonal customers have traditionally been from the D.C., northern Virginia and Baltimore area, but local people are starting to find them. “People don’t realize what we have here,” said Taylor. “They don’t realize others are driving an hour or more to come here.”

Young families comprise a majority of visitors, and the draw for them is the animals, the pumpkin patch and other kid-friendly activities. “The corn maze is less of an attraction,” said Taylor. “That used to be what it was all about, but only about 40% of visitors go through it now. It used to be 30 acres with seven or eight miles of trails, but we still hold the title of Maryland’s largest corn maze with 5.2 miles of trails in a 15-acre field.”

Winterbrook Farm was the first in the area to add a zip line to their attractions. Taylor said the zip line isn’t long, but visitors love it. A popular new addition this season was a pumpkin jumping pillow. “We knew we needed a jumping pillow because other farms have them,” said Taylor. “But they’re expensive, and the public doesn’t realize that.”

Since one of the seasonal draws is pumpkins, Winterbrook Farm offers plenty of options. “Our pumpkin patch has more than 35 varieties of pumpkins,” said Taylor. “There are tiny gourds, pink pumpkins, white pumpkins, pumpkins of all kinds and people love it. They never know what they’re going to find.” 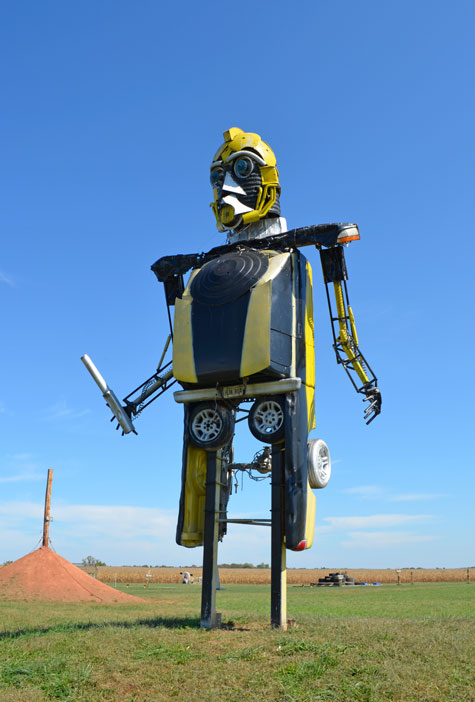 For disease management, pumpkins are grown in a three-year rotation. “We plant rye, then roll it down and plant through it,” said Taylor. “This year, we had to move the patch at the last minute so we didn’t have the rye. There are a lot of weeds this year, so people had to hunt for pumpkins.”

As the agritainment aspect of the farm has grown, Taylor said it’s important to pay attention to details and make sure the farm always looks presentable and has as many amenities the Huffmans can reasonably offer. “We’re a working farm, but open only 15 days a year,” said Taylor. “We try to make it as accommodating as possible.”

Despite the challenges they’ve encountered, Taylor and Brandon are optimistic about the farm’s future. Taylor said getting the word out about the farm has been a struggle, but is hopeful that adding strawberries and other produce will attract more customers.

“People don’t know we exist, but once they get here, they say they love it and want to come back,” said Taylor. “We’ve changed our marketing and taken it to social media because that’s where people are. People like to take photos of what we have, such as the flag, and put the photos on social media.”