Burned, but not out 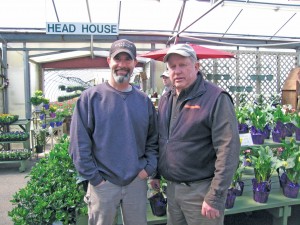 by Kristen M. Castrataro
It was a gray day as I drove into Schartner Farms in North Kingstown, RI. The blackened shell of the farm stand dominated the landscape, as did the acrid smell of creosote although it had been nearly a month since a fire destroyed the local landmark. Despite the devastation, a spirit of resilience shone in the bright white banner: We are open. The front greenhouse had been rapidly converted to a sales room. A stone walkway was laid to welcome customers to the “new” location. Inside, the building looked anything but thrown-together, the greenhouse glowed with lavender, yellow and pink bulbs. Spring-themed decorations perched on artful displays. Every employee sported a cheerful smile, greeting customers unfazed by the specter of the former stand.
I caught up with Rit Schartner, owner of Schartner Farms, in the kitchen of his farmhouse. I expected he would be consumed with the fire and its fallout, but I was mistaken. I got the details only after a great deal of prodding. The fire started over the carrot washer where a propane heater and electrical line ran. While the responders battled the flames, Rit and his sons turned their attention to the greenhouses, sheltering their seedlings and spring plants. The utilities, both propane and electric, had been disconnected for the firefighters’ safety. With outside temperatures hovering around freezing, the future of the Schartner’s entire growing season was at risk. Rit called a friend at the power company and within an hour, a truck and pole arrived to turned on power to the greenhouse. The propane was another issue, a local pipefitter capped the existing gas line, rerouted it to the greenhouses and had heat restored before the fire was out.
It was the public’s reaction to the catastrophe that moved Rit the most. One long-time friend and customer, Ken Payne, reflected on the unexpected impact the fire had on him. Prior to the fire, he had purchased cabbage, carrots and beets from the stand to make borscht. He ate half, and then came the fire. When he sat down to eat the rest, he recalls, “I realized I was eating my last vegetables from the old farm stand and I felt such a sense of loss.” Neighbors from across Rhode Island apparently had similar reactions, schools and individuals drove in offering to help clean up, local businesses offered assistance with rebuilding and many expressed concerns that they would be unable to reopen.
Ironically, Rit’s concerns about the future of his farm have little to do with the fire and much to do with the maps and documents that clutter his kitchen table. These documents chronicle his family’s 10-year odyssey to purchase and conserve for agriculture the 140 acre Bald Hill Nurseries. The endeavor began in 2005, when Rit mortgaged his existing properties and purchased the property for $7.4 Million, with the intent of preserving it under his agricultural conservation model. Under this plan the property is conserved for agricultural production but includes a floating “building footprint” that simultaneously allows for building as the farm business changes, while limiting the overall acreage that can be developed.
After three and a half years of negotiations, the Schartners signed a purchase and sales agreement with a buyers’ group consisting of the Towns of Exeter and North Kingstown, the State of Rhode Island and private donors. The first phase, successfully completed in 2008, covered 80 acres of the property and allowed for up to 8 acres of buildings for agricultural business. The second phase incorporated a two-year waiting period, after which the buyers’ group could either purchase the development rights under the agricultural conservation model used in the first phase or exercise the right of first refusal in the face of an offer by a developer. The buyers’ group could also have relinquished all rights to the property, freeing the Schartners to develop it as they see fit. Five years after the required waiting period, the buyers’ group has declined to act on any of the three options available and have also hindered Schartners’ development of the property. This leaves the multi-generation farm family with a $5 million debt, a debt they expected to clear by either completing their agreement with the buyers’ group or developing according to their conservation model.
In one key move, the State of Rhode Island transferred the property’s frontage, where the access road is located, out of the Department of Transportation and into the Department of Environmental Management (DEM). This action enabled DEM to limit future upgrades of the road necessary for development and to demand a lease agreement for the Schartners to access the farm. The Schartners are not wholly without an exit strategy, however. In 1987, they were approved for a 24-acre development on the main road that passes by the site of the farm stand. The planning map shows a total of 18 single-family lots obscuring the frontage of the Schartners’ existing strawberry field. Rit asserts that the development will have to become reality if conditions on the Bald Hill property remain unchanged. Reflecting upon the events of the last decade, Rit comments wryly, “I’ve changed my name to Job.” The indefatigable optimism that marks the true farmer reemerged as he added, “But at the end he turned out alright, I think.” As I left Rit and drove past the strawberry field, I imagined it covered in house lots and I, with Ken Payne, felt a sense of loss. I thought of all the land I have watched being converted to houses or strip malls or car dealerships. Then I thought of what it would mean if this family was forced out of business in RI. I dared to hope that things would indeed “turn out alright” for the Schartner family.