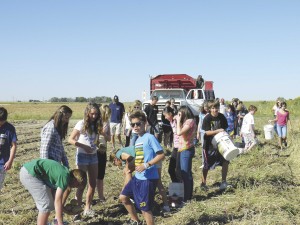 by Sally Colby
Mike Heath says the story of how he started farming is complicated, but it started when he was doing agricultural development work overseas.
“When I came back in 1979, I started farming in this area, and I’ve been here since then,” said Heath. “We’re at about 3,600’, which is considered high desert. We can usually grow frost-free from the middle of May until the end of October.”
At one time, the Heaths farmed 500 acres, but today, they farm about 200 certified organic acres. “We’re labor intensive,” said Heath, describing the challenges of organic vegetable production. They grow tomatoes, peppers and other vegetable crops on about two acres, most of which are sold at local farmers’ markets. “We do three farmer’s markets,” said Heath. “We also sell through a co-op.”
A friend in the Boise area has a certified organic greenhouse and grows starts for the Heaths.
Last year, Heath and a friend purchased a bean picker, so he plans to grow more green beans this year. “I’ve grown green beans for organic seed for many years, so I know which varieties I like,” he said. “We grow several acres of green beans, some for local markets, but hand-picking has been the issue. We’ve grown ‘Jade’ and we really like it because it holds up so well in the field. At this point, that’s a favorite for mechanical harvest. We’ll probably grow another three or four additional acres of green beans this year.”
Although the Heaths have developed a reputation for offering fresh produce at farmers’ markets, they also sell quite a few dried beans. “We grow a lot of dry beans, with red at the top for most acreage,” said Heath. “We have several contracts for those. We also grow black, pinto, pink, small white, cannellini and flageolet.”
After harvest, beans are sent to a certified organic bean warehouse in Twin Falls for milling and packaging. Dried beans are sold in small one-pound bags and also in 25-pound bags to restaurants and grocery stores for bulk sales.
Heath says the key to successful production and soil health is crop rotation.
“The most important part of the organic rotation for us is alfalfa hay,” said Mike. “We have a good market for that with some organic dairies in the area. We usually keep our hay in for at least three years, and then we take it out and go to beans. The reason we like to go to beans after hay is because the hay is good at controlling weeds so we have clean beans. Weeds can easily affect beans.”
Another rotation might be from alfalfa to corn, or to potatoes. “Then we usually grow a grain crop next,” said Heath. “After that, we plant a row crop and then back to hay. It’s a seven-year rotation.”
When it’s time to take alfalfa out, Heath uses a chisel plow and goes across the ground several times in different directions, cutting into the ground three to five inches. “That does an amazing job cutting off the alfalfa and crowning it,” he said.
The Heaths also sell corn to organic dairies; sold as shelled corn or as earlage.
In any given year, the seven-year rotation means that the Heaths can grow a variety of crops on rotated ground.
lot of hand-picking, and a lot of space when it comes to storage,” said Mike. “We’ve had some squash bug issues but since the farm has been in organic production for so long, the beneficials that attack squash bugs have thrived.”
To ensure optimum fertility for crops, the Heaths test soil regularly. “I usually test the fields that are going into potatoes or corn and will require extra nitrogen,” said Heath. “Then I can decide if I’m going to put on more compost or put on fish.”
Although Heath has a good idea of soil fertility based on crop yield, he believes testing is important. “When you’re organic, you can get a conventional soil test that provides an idea of where the soil stands, but you don’t get recommendations that are suitable for organic standards,” he said. “That’s one of the disadvantages of organic – we can’t fix it immediately like we could in conventional.”
Heath noted the high desert soils are fairly calcareous and don’t have a lot of organic matter naturally. The Heaths source compost from conventional dairy farms, which is allowed in organic system.
Potatoes are an important crop for the Heaths, who put about 20 acres of tubers in each year. Although most area growers use four or six row planters, the Heaths have found that a two-row potato planter works fine for their operation.
“In mid to late July, we start digging potatoes by hand for farmers’ markets and the co-op,” said Heath. “Then in September, we start digging with a windrower to lay them on the ground then pick then up and put them in buckets. It’s very labor intensive, but it leaves the dirt in the field. Then when we get into washing and boxing them, we don’t need a lot of extra labor.”
In October, the Heaths use a regular harvester to dig potatoes and store them in boxes. “That’s how we’re different from other potato growers, and the reason we have to stay small,” said Heath, noting that the boxes are expensive. “We also have to make sure that harvest is over before ground gets too cold.”
The farm is GAP (Good Agricultural Practices) certified for potatoes. Heath says a lot of what GAP requires is what he is required to do for organic production. “It hasn’t made a big difference in the market, and not everyone asks for it,” he said. “Most potato growers in Idaho have to be GAP certified because the processors want it.”