by Gail March Yerke
It was the New York Agricultural Society that became one of the first organizations to recognize Century Farms in our country back in 1937. Today the USDA identifies the vast majority of farms and ranches in the United States as family owned and operated. The Century Farm program honors generations of families that have dedicated their lives to farming. 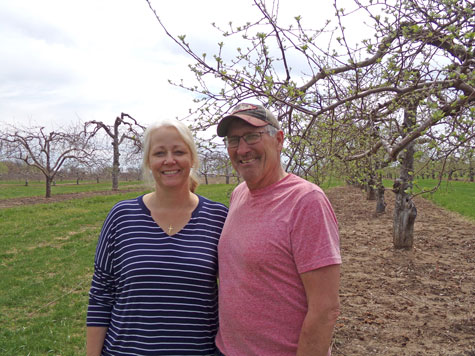 In the late 1970s Steve Jacobson and his brothers helped plant the first apple trees at their farm. He expanded the operation again in 1985 with his wife Judy.
Photos by Gail March Yerke

Wisconsin is just one of 43 states that offers Centennial and Sesquicentennial awards to families with continuous ownership and operation of farms for 100 and 150 years, respectively.

The Badger State has recognized over 9,000 Centennial and 925 Sesquicentennial farm families since their program began in conjunction with the state’s centennial celebration in 1948. Last year 127 Centennial and more than 50 Sesquicentennial homesteads were honored at their annual state fair. The Wisconsin State Fair Director of Competitive Exhibits Jill Albanese has overseen the Century Farm program since 1997. Farming has changed over the past 150 years, and to remain viable many farms have had to adapt and diversify to maintain long term success – and the Dairy State is more than dairy farms these days.

“For this year’s event we have seen applications from tobacco, cranberry and strawberry farms as well as beef and dairy. Entries include 140 Centennial and 23 Sesquicentennial farms,” said Albanese. “Meeting the families and hearing stories about their farms is one of my favorite parts of the day.”

Wisconsin’s Century Farm awards program takes place annually during the 11-day state fair in West Allis, a Milwaukee suburb. It is there the honorees receive a Century Farm certificate, a sign for their property and a complimentary family photo. Applications are available each year through the fair office until March 1. The Wisconsin State Fair will host this year’s awards breakfast on Tuesday, Aug. 6.

One of the past recipients of the Sesquicentennial Award is the Jacobson family of Elkhorn. Steve and Judy Jacobson own and operate the Apple Barn Orchard and Winery located in Walworth County, not far from the Wisconsin-Illinois border. Besides their 40-acre orchard, the agribusiness has branched out to include U-pick strawberries and pumpkins as well as a country store, bakery and winery.

It was 1846 when Maren and Jacob Brensetre arrived in Wisconsin from Oslo, Norway. The family surname changed to Jacobson when their son Ole followed Scandinavian tradition by taking his father’s first name and adding the word “son.” The original smoke house built in 1865 still stands on the homestead today.

Steve Jacobson remembers helping on the farm as a young boy, picking rocks from the fields. In the late 1970s he and his brothers helped plant the first apple trees, expanding the operation again in 1985 with his wife Judy. Together they changed over the barn and milk house to cold storage, a processing area and a country store. Their five daughters return to the farm to help with the busy season.

As the operation expanded the Jacobsons brought on Jake Drefs as their winemaker. The winery is a unique addition to this Wisconsin farm that offers sales of bottled wines and a bar area for wine tasting events. Besides managing the winery, Drefs coordinates their marketing programs and website. Sales and a wine club are offered through their website.

Six acres of strawberries provide their first U-pick season starting in mid-June. “It used to be we’d start the strawberry sales when the kids got off of school for the summer,” said Judy. “Now it’s more like mid-June before the pick-your-own starts.” Flavorfest, Honeoye, Jewel and Winona are some of their preferred varieties. “We rotate our strawberry fields about every fourth year,” she added.

Over 4,000 fruit trees offer 14 popular varieties of apples including Honey Crisp, Jona Gold, McIntosh and Cortland. The 40-acre orchard produces enough apples for direct farm sales, packaged distribution to regional grocery stores and wine and cider production. “The apple crop produces about 75% of our sales, with strawberries at about 10%,” Steve said. Besides apples, the Jacobson family uses their own pears and strawberries in a few of their more than a dozen varieties of wine.

Apple Barn’s autumn activities include pumpkins, a tree maze and tractor-train rides. Their country store and bakery offers an extensive selection of fresh-picked and U-pick apples, apple pies, caramel apples, homemade jams, apple cider and donuts. Like many other Midwestern farms that began as traditional dairy operations, the Jacobson family business has evolved and adapted over the years.

One hundred miles north of Walworth County you’ll find Drewry Farms of Plymouth, WI. Originally from Vermont, the Drewry family settled there in 1847. The continuously family owned property includes over 120 acres of sustainably managed hardwood forest. They tap more than 5,000 trees each year on their property overlooking the Onion River Valley in Sheboygan County. 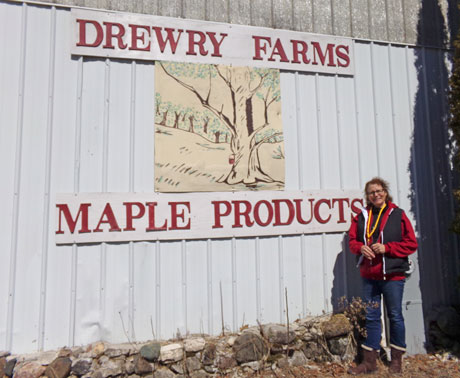 Originally from Vermont, the Drewry family settled in Wisconsin in 1847. Ann Drewry-Weeder is part of the fifth generation to farm the land.

Their Sesquicentennial farm produces four grades of maple syrup including direct consumer products as well as syrup used in food production. Fifth generation farmer Ann Drewry-Weeder and her husband John do all of the bottling on the farm. “We sell online and at farm markets,” said Drewry-Weeder. “Some of our syrup goes into manufacturing breakfast sausage and other food products. Besides bottled syrup our maple [pop]corn is very popular,” she added.

According to the USDA, Wisconsin has ranked either third or fourth in the nation in maple syrup production over the past few years.

A common thread seen in these Centennial and Sesquicentennial farms is their steadfast dedication to family along with their ability to grow and change over the years. Just two examples of the Midwest’s diversity in farming, the Jacobson and Drewry families are examples of our country’s strong agriculture heritage.