Not many 21st century farms can boast a history that extends all the way back to the presidency of Woodrow Wilson, but Waldoch Farm of Lino Lakes, MN, can. The farm has been officially named by the North Star State as a “Century Farm,” a recognition reserved only to farms that have been in continuous ownership by a family for 100 years or more. 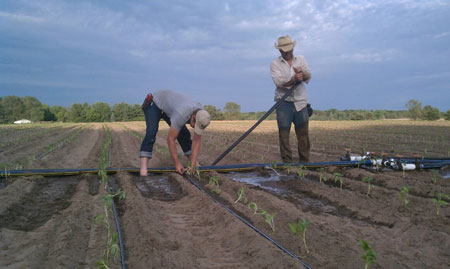 First opened in 1916 by Bill and Lucille Waldoch, Waldoch Farm has seen a variety of changes in its size and scope. It was recently recognized for its longevity.
Photo courtesy of Waldoch Farm

Waldoch Farm was first opened in 1916 by Bill and Lucille Waldoch. Throughout the intervening years, it has seen a variety of changes in size and scope. Waldoch Farm was operating well before Lino Lakes was incorporated as a city. Its growth and transformation from a small, roadside vegetable stand to an expansive retail and garden center is a result of strong family ties, an adherence to tradition and an unyielding work ethic. The farm originally sold processed chickens, then expanded into raising dairy cattle, and eventually began building greenhouses for plants.

Today, the farm continues to thrive and is overseen by the fourth generation of the family. Brothers Doug and Andrew Joyer are today the driving force behind Waldoch’s continued success. Having both studied environmental horticulture at the University of Minnesota, Andrew serves as head garden grower and Doug is the field manager.

“We’re very proud and connected to our history,” said Doug. The farm still uses some of its original pieces of machinery, including both a potato planter and picker.

“We cultivate over 35 acres of fresh produce,” Andrew explained. “Our garden center sits on about seven acres with about 6,300 square feet of floor space. Our season runs from April through Halloween. Our number of employees fluctuates throughout the season accordingly.”

Bees are also kept at the farm, with Doug maintaining 35 beehives. A business with a very local focus, Doug stated that about 95% of Waldoch Farm’s sales are retail, and “almost all our customers are coming to us from less than a 45-minute drive away.”

Another important part of Waldoch Farm’s role in the community is the engagement of local young people and introducing them to the vital role local farms play in their lives. Waldoch Farm now houses an educational farmyard consisting of horses, donkeys, pygmy goats, a corn maze and other rotating attractions throughout the year. These include a fall-themed corn maze event for all ages, free weekend hayrides and a U-pick pumpkin patch. In addition, Waldoch Farm makes itself available to student field trips to several local schools, offering learning opportunities for students wanting to experience what life is like living and working on a farm.

According to Doug, container gardening is also becoming a popular alternative for people who don’t have the outdoor space but still want to garden. Employees at Waldoch are always on hand to assist customers get their start; the Garden Center hosts “Porch Parties” programs, which are container creation classes. Doug said classes of up to 12 people are given a crash course in how to create their showpiece containers.

In recognition of the community’s growing international population, the farm offers a selection of fruit and vegetable products that, while not necessarily common in Minnesota, are more commonly grown overseas, helping to make newly arrived customers from far off lands feel more at home.

Describing their role in the family farm as more of a mission than merely a job, Andrew and Doug are committed to continuing their family’s traditions of hard work, excellent customer service and commitment to their community.