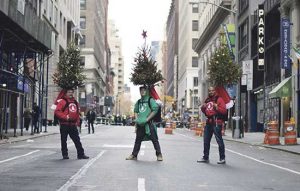 Following on the heels of its first, fully-funded promotional campaign, the Christmas Tree Promotion Board shared a campaign summary video with hundreds of Christmas tree producers across the country.
“The video is a highlights reel of sorts; sharing the fun, heartwarming and creative activations from the 2016 promotional campaign,” notes CTPB Executive Director, Tim O’Connor. “The video provides growers the opportunity to see what they likely missed during the busy harvest and selling season.”
The video was presented at more than 20 state, regional and provincial meetings between January and March, reaching growers in more than 22 states and Canadian provinces. Each time the video was shared, CTPB staff members participated in a question and answer session to provide more details and to ensure growers had accurate information about the campaign.
These sessions were also an opportunity to hear grower feedback on the campaign and what they would like to see as the campaign moves forward.
The CTPB is hoping to host an online webinar featuring the video and a question and answer session for growers who may not have seen the video at a local meeting. Details on the session will be announced to growers via email.
2016 Review and What’s New for 2017
The primary focus of the recent two-day meeting of the Promotion Board was to review the 2016 campaign and to determine how to move forward in 2017.
Concept Farm, CTPB’s ad agency, presented detailed results on consumer reach for each of the activations that were a part of the 2016 campaign. Board members learned how each activation was executed, it’s related costs and the measurable reach for each event.
A part of the campaign budget was pre- and post-campaign consumer research. The research was enlightening and provided tremendous guidance on potential customers, their motivations and tendencies, as well as their propensity to purchase real or artificial Christmas trees. Most importantly, the research provided insight into messaging that would appeal to our target audience and where to reach our target customers.
Based on the results of the 2016 campaign, the Promotion Board chose to adopt a campaign plan for 2017 that includes the following:

Engage CTPB management team member, Marsha Gray, for additional hours and focus efforts on grower engagement and communications. To create that available time, Gray is resigning her position as the Executive Director of the Michigan Christmas Tree Association.
The first step in the 2017 campaign is a series of strategy sessions with the Promotion Board management team, Promotion Committee chair, ad agency and public relations agency teams that will take place over the next 45 days.
The Promotion Board will be sharing campaign updates as we move through the summer and approach Christmas 2017.
Rockis Elected Chair of Christmas Tree Promotion Board
At the Christmas Tree Promotion Board’s recent meeting, Jim Rockis was elected to serve as the Chairman of the board for the next year. Rockis, a seedling producer and Christmas tree grower from West Virginia, was originally named to the board in January of 2015 and was recently re-appointed by former Secretary of Agriculture, Tom Vilsack. Rockis succeeds Betty Malone of Oregon in this position where she served for two years.
“I have so much respect for Betty,” commented Jim Rockis. “The time that she devoted to this program and her commitment to creating a strong foundation is incredible.”
Rockis has chaired the Research Committee for the CTPB and has been very visible at state and regional meetings over the last two years, representing the Promotion Board.
Joining Rockis as officers of the Promotion Board are Rex Korson of Korson’s Tree Farms in Sidney, Michigan as Vice Chairman; Paul Battaglia of Battaglia Ranch Christmas Tree Farm in San Martin, California as Treasurer and Beth Walterscheidt of Evergreen Farms in Elgin, Texas as Secretary.