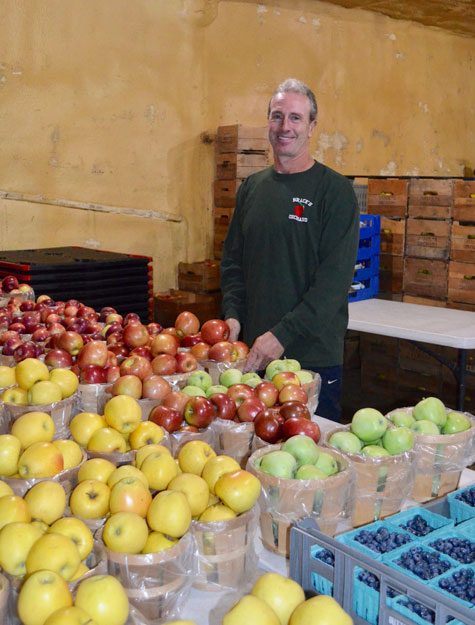 Paul Brace has embraced his role as an apple grower at his family’s orchard. Their cider business has been steadily growing.

One generation ago, there were 80 fruit growers in Luzerne County, PA. Today there are just two, and Brace’s Orchard, in Dallas, PA, is one of them. As an eighth-generation fruit grower, Paul Brace has seen many changes in the industry, but he and his family remain committed to providing high quality fresh fruit both at farmers markets and directly from their farm store.

“In my dad’s and grandfather’s generation, they sold 99% of apples waxed and at the grocery store,” said Brace. “They never went to market – everything was packaged and sent to the grocery chain.”

Brace talked about some of the changes since he became part of the business in 1982. The barn, more than a century old, was just a barn, but Brace added to and improved it. It now includes a farm store. “All the trees were standard-size trees,” he said. “Since 1982, I’ve planted 3,000 to 5,000 trees every year and still only have a percentage replanted.”

The most popular apple variety among customers is Honeycrisp. Brace estimated there are at least 12,000 Honeycrisp trees in the orchard despite the challenges that come with growing it because the variety is a customer favorite. To make space for new Honeycrisp and other newer varieties, Brace removed older, less productive blocks. “Honeycrisp will never be overproduced,” said Brace. “There will always be a demand, and the quality and price will always be good.” Brace said other varieties are more grower-friendly, but he’s determined to grow what his customers want.

A relatively new variety at Brace’s is EverCrisp, a Honeycrisp x Fuji cross. Brace also grows Pink Lady, another customer favorite. Despite the potential profit from Honeycrisp, Brace still grows some old favorites, and customers love them. “Brace’s Orchard is still in business because of Macoun apples, which people thought were McIntosh,” he said. “We planted them in 1956. It was a fluke – we bought them as McIntosh but they were Macoun, developed from McIntosh. People wait all year for them because they can’t get them in a grocery store. They have a soft skin and bruise easily, and they’re only good for a short time because they lose their tart-sweet flavor.” 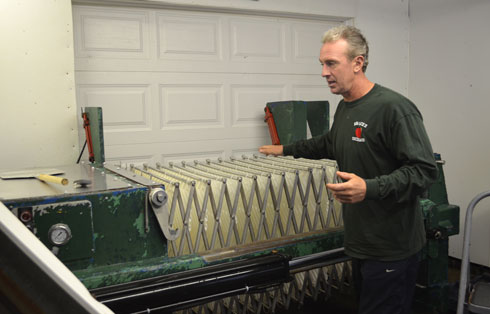 By the third year, Paul Brace’s production of cider surpassed what his press owner could handle, which led him to purchase his own equipment.
Photos by Sally Colby

In addition to apples, Brace’s grows a variety of other fruits. “We started growing donut peaches about 15 years ago to meet customer demand,” said Brace. He also grows nectarines, sour and sweet cherries, pears, plums, blueberries and several pears including Bosc, Bartlett and Asian.

Brace said farmers markets are highly competitive, and offering fresh, tree-ripened fruit that’s ready to eat is a must. “People who go to farmers markets had to make an effort to get there and they don’t want to be disappointed,” said Brace. “People who visit at the market have a limited amount of time and often know what they want. I have to make a decision about every single piece of fruit that goes to market, so I make sure the same size and quality fruit is in every basket.” Brace is the president of the Scranton Farmers Market, which operates as a co-op, and believes it’s important to be there himself so he loads the truck and spends three days a week there.

One of the most popular products bearing the Brace’s Orchard name is apple cider. “All of our apples were going to someone else,” said Brace, explaining the family’s start in cider making. “There were trailer loads of apples we were never paid for, so I said ‘Let’s try making cider.’ For the first several years, I took apples to a nearby facility and made cider there twice a week and brought it back here to sell.”

Brace made 2,000 gallons the first year, and 20,000 the following year. By the third year, Brace’s production surpassed what the cider press owner could handle, which led Brace to purchase his own equipment. Today, he makes cider with his own apple blends but strives to keep it consistent. “Tart and sweet,” he said. “As soon as Macs come in in September, I use the same percentage of Macs as sweet apples. If you make straight Gala cider in September, it’s the worst cider you’ll ever drink – it’s too sweet and too bland. I only use certain varieties.”

The family has been making apple cider since 1982, and are on their third press and sixth pasteurizer. Although it’s time-consuming, Brace said the process is fairly simple. “We never press two bins of the same variety,” he said. “We put bins in rows outside the night before, so whoever is making the cider knows which apples go in the blend.” Apples are washed and brushed, then squeezed. 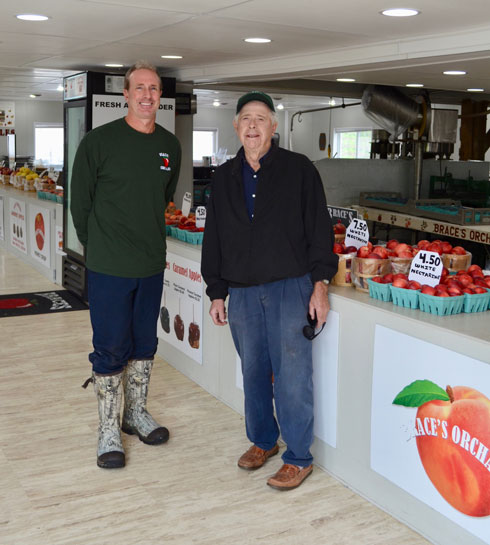 Paul and his father Larry are the seventh and eighth generations to work their family’s fruit farm.

“The hammer mill controls the size of the screen,” said Brace. “When I turn it on, it squeezes juice into the tray underneath. In five minutes, we have 50 gallons of cider. There’s a screen and filtration system, and the pasteurizer starts after 400 gallons is squeezed.” Pomace that’s left after pressing goes directly to a neighbor for feeding steers, which eliminates the problem of fruit flies and other insect pests.

Brace makes cider year-round to order for produce managers at several area grocery stores. In autumn, cider making takes significantly more time, but Brace said he figured out how to operate the system efficiently. “It takes six hours to complete the process,” he said. “We make cider once a week in summer, then production ramps up toward the end of summer. By Labor Day, we start making it twice a week – usually 2,000 to 3,000 gallons of cider each day.”

Although customers want cider in September, Brace said the best cider is made around Thanksgiving because the starch in the apple has turned to sugar. “We don’t use preservatives,” he said, “just flash pasteurization at 160 degrees.”

Another popular item at both the farm store and farmers markets is cider donuts, made by Paul’s wife LuAnn. Brace said his father bought LuAnn the store’s first donut machine for helping with the business. Brace said weekends bring lines of customers waiting for fresh cider donuts.

Several years ago, the Braces re-did the interior of the farm store, installed a new cooler and added the necessary components for GAP. Brace said GAP certification was essential because he sells to grocery stores. He keeps meticulous records and instructs employees in everything from proper hand washing to how to properly handle fruit in the orchard.

“It takes a lot of perseverance,” said Brace, explaining the challenges of operating a thriving orchard while growing the business to suit customers. “There’s a lot of bookkeeping and keeping up with regulations. It was fortunate that my dad Larry could farm, save and invest to put money back into the business.”