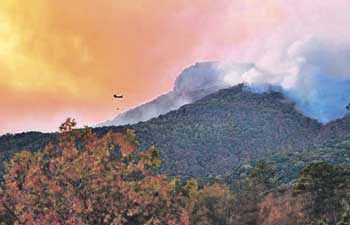 by Karl H. Kazaks
On a recent December day, as the Thomas fire poured through California’s Ventura and Santa Barbara Counties, already larger in area than all of New York City, the USDA Forest Service hosted a webinar on “Climate, Megafires, and Conservation Financing.”
“Hotter, drier conditions are fundamentally changing fire and fire behavior,” said Dr. Cynthia West, the director of the Forest Service’s Office of Sustainability and Climate.
“We are experiencing longer wildfire seasons,” said Denise Blankenship, the deputy director of Fire and Aviation Management at the Forest Service. At that point, more than 9.1 million acres had already burned nationwide, she said — 2.1 million acres or 30 percent — above the 10-year average.
The webinar, which attracted national participation, was structured to explain how climate changes have impacted the fire regime in the U.S. as well as discuss how conservation financing can support efforts to mitigate the effects of fire. The remainder of this article will explore the connections between climate and fire.
Matt Jolly, a research ecologist at the Forest Service’s Rocky Mountain Research Station, shared information his agency has spent more than five years uncovering, data about the links between the changing climate and the frequency and appearance of fires in our nation.
Wildland fire regimes are driven by three important components — fuel, ignition sources and climate. The Forest Service’s work found two main impacts the changing climate is having on fires in the U.S.: The fire season has lengthened and the severity of the season (even disregarding the lengthening of the season) has also increased.
To define climate, Jolly said, “Climate is what you expect, weather is what you get.” Weather is what happens in any area on a short-term time-scale, while climate is the range of weather conditions expected for any one area.
Temperature, humidity and precipitation are all factors which affect fires.
In recent years across the continental U.S., there has been an increase in average temperatures. There has also been an increase in unusually warm years, Jolly said. Warmer temperatures can lead to more fires.
While humidity on a large-scale basis has remained constant, there has been in recent years a decrease in humidity, which also increases the risk of fire.
While the country has not seen a decrease in overall precipitation, there has been an almost-nationwide increase in the number of rain-free days and an increase in rainfall intensity.
That means that although there may be the same amount of precipitation falling over the course of a year, there are longer periods with no precipitation, which has led to the lengthening of the fire season.
When you add that to increases in wind speed which are also occurring in the climate across the country, the result is higher fire danger.
Jolly and his colleagues use data to create fire danger indices. The indices, he said, “combine multiple weather variables to a single index.”
By studying when the correlation between fire indices and actual fires, they have found a strong relationship between the predictive factor of the indices and the occurrence and intensity of fires.
Put another way, by studying the climate conditions used to predict fire — factors including temperature, humidity, wind speed and precipitation — they discovered that the increase in the number and intensity of fires in recent years correlates to the climactic conditions you would expect to be associated with fire events.
Between 1979 and 2013 there was an 18.7 percent increase in the global fire weather season, Jolly said. Also, the global burnable area has also increased.
For example, despite the attention the Western fires of recent years has attracted, the southeastern part of the U.S. also has experience longer seasons and increased severity.
In the fall of 2016, a number of wildfires occurred in the Southeastern U.S. including the Great Smoky Mountains wildfires in eastern Tennessee.
This area, like the rest of the Southeastern U.S., has long been thought of as a moisture-laden region. But there are areas, Jolly said, “where conditions are getting worse year after year,” with the fire season lengthening and fire intensity increasing.
Last year, Jolly spent time in Georgia. The relative humidity on the day he arrived was two percent or desert-like, as he called it. The recovery humidity at nighttime sometimes was only in the 20-, 30-, or 40-percent range, anomalous for the region.
If the climate changes persist, Jolly said, so too will the lengthened fire season, as well as the extreme variations found in certain regions as California, the Rocky Mountains, the Great Basin and the Southeastern U.S.
Those climactic conditions, together with available fuel and ignition, will result in more burned areas and more high intensity fires.
This conclusion accords to the reality we are all witnessing this year in Northern and Southern California, last year in Tennessee, the last several years across the West.