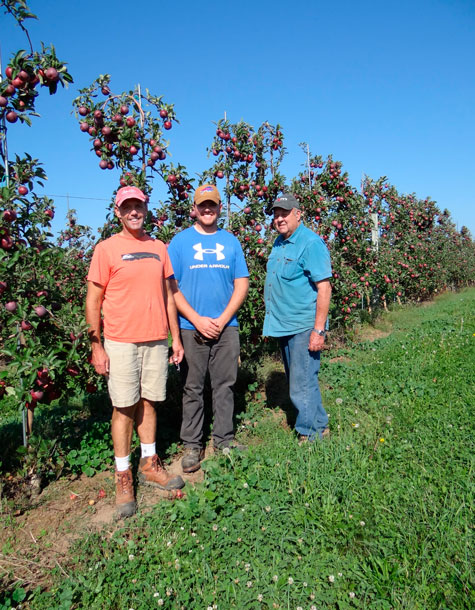 (L – R) Dave, Tom and Bob Coene of Windmill Farms LLC of Ontario, NY, are celebrating one century of apple production on their family orchard.
Photos by Elizabeth A. Tomlin

The year 2020 ushers in a new century for the Coene family of Windmill Farms LLC of Ontario, NY, where five generations have diligently worked to keep their apple production expanding and changing to meet new markets and consumers’ new demands.

Fifth generation apple farmer Tom Coene, a recent graduate of SUNY Cobleskill with degrees in agricultural business management and sustainable crop production, now works full-time on the farm. He described the farm’s history, explaining that it originated when Theophil and Emma Coene, who emigrated from Belgium in 1907, settled on 55 acres in Webster, NY, in 1911. Theophil and Emma’s son Richard and his wife Margaret operated the farm beginning in the late 1920s. Originally, the farm produced apples, tart cherries, wheat, corn, beans, beef cows, chickens, eggs and pigs. Those commodities were sold at local retail markets and to local processors. In 1964, their son Robert (Bob) and his wife Judith purchased the farm from them, renaming it Windmill Farms in 1973. The farm then featured an on-farm cider mill and farm market that operated through 2005.

Since 1996, Windmill Farms has been owned and operated by Bob and Judith along with their son David and his wife Elizabeth. Now Tom is on board.

“Many things have changed in the years since the farm was settled,” explained Tom. “The farm now grows exclusively apples and spans approximately 500 acres. We are currently growing roughly 400 acres of apples for marketing in both the fresh and processing supply chain. We grow roughly 30 different varieties that end up in products ranging from Mott’s and Musselman’s applesauce to McDonald’s apple slices to fresh market fruit to hard cider.”

Apple varieties include modern favorites such as Honeycrisp, Gala, Fuji, SnapDragon, EverCrisp and Sweet Cheeks. The farm uses modern growing technologies developed at universities such as Cornell and Washington State.

Bob said the biggest change, other than varieties, is the new system of planting smaller trees. “In my father’s era, trees were planted 30 to 40 feet apart in a row and that transitioned down through the years to 30 feet, to 25 feet,” Bob explained. “Now our plantings are primarily 12 to 11 feet in width, and apple tree plantings in a row are now three feet or less.”

Bob reported that some trees are planted even closer than that. “You’re getting people who want to plant 2,000 trees in an acre,” he said.

“The thing about planting these trees closer together is you get production a lot quicker,” Tom explained. “When you planted a free-standing tree, to get that tree to full size, it usually took about 20 years. Here, we’re hoping to pick up a full crop in the fifth, or sometimes the sixth, year.”

“What we’re trying to grow is more of a wall of fruit, like a grape system,” David said. “It’s like a two-dimensional system. It’s very thin and the fruit is all exposed. On a larger tree, anything that remains under the leaves would be green and we wouldn’t have a market for it. Consumers want high quality fruit that’s primarily 80%-plus colored, and three inches in size.”

The concept concerns light interception. “The more light you get down to the apple, the better quality, and the better color the apple gets,” remarked Tom. Limiting shading is the goal.

Tom said that staying with current trends is huge for success in the fruit industry. “I’m very thankful the way that my grandfather and my father have been willing to change and adapt,” he said. “If you’re not willing to change in this industry, you’re not going to be around for too long.”

Tom said that due to the competition of a global agricultural marketplace, the farm has been pushed to becoming increasingly specialized and mechanized. Grafting trees helps cut down on the time of tree production and is one way the farm has advanced its growing technique. 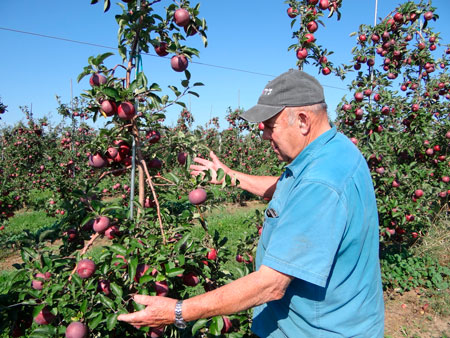 Third-generation apple grower Bob Coene explains how the size of the trees has changed over the years.

“If these varieties keep changing very fast, we can just cut the trees off, graft a new one on there and the infrastructure is already there,” Tom explained. “We can pick a crop off of a grafted tree in three years – versus ripping it out, working the ground, waiting two years to get a nursery tree, then waiting three or four years for the tree to grow. We can flip an orchard over a lot quicker by grafting it than we could planting a nursery tree.”

New apple varieties have been accessed through Cornell University. “Cornell University probably has the foremost apple breeding program in the United States,” said Tom. “For example, Empire, Jonagold, Cortland, SnapDragon and RubyFrost were all bred at the Cornell Breeding Program. The co-op that we’re part owners of, Crunch Time Apple Growers, purchased the rights to exclusively grow SnapDragon and RubyFrost in North America for the next 20 years. We purchased the rights of those apples from Cornell University. We pay them a royalty on every tree we plant, every acre we plant and every packed box of apples that gets sold.”

Windmill Farms employs roughly 40 individuals throughout the year and follows strict FDA and USDA food safety protocols to ensure only the highest quality and safest apples make it to market. About 34 laborers come from Mexico to the farm to work at harvest on the H-2A labor program. The family said that New York’s new Farm Laborers Fair Labor Practices Act will have a huge impact at their farm.

“Our prices that we receive for our commodities are all fixed,” remarked David. “We can’t go to our buyers and tell them that they need to pay us more money because we have to pay higher labor costs. Most of the people that we sell fruit to also buy apples from Pennsylvania, Michigan and Virginia, where they don’t have these laws and don’t have to pay overtime and higher wages like we do. It makes unfair competition for us.”

“There’s a large percent of your fruit and vegetables in the U.S. that has to be harvested by H-2A labor,” David added. “Everyone’s concerned about this. We feel that we did some good by at least keeping it at 60 hours before we pay overtime, but the scary part about it is that’s something that can be reviewed again by a labor board.”

Tom said that labor is always an issue with farmers. “Finding a reliable source of labor is going to continue to be our most important issue. If it weren’t for the H2-A program, right now we probably wouldn’t be in business.”

“I love being involved with Farm Bureau,” he said. “One way I can see myself helping agriculture in New York is not only getting young farmers and ranchers to work together here in our region, but across the state. I think that our key phrase going forward should be ‘Positive Collaboration.’”

Tom is also president of the Young Fruit Growers of Western New York, a group of about 35. They meet every other month. “We talk about what we’re doing on our farms and what we’ve seen going on in the industry,” he said. “We go on a trip about once a year, usually to another region of the state or of the country, that’s growing fruit.” The group has been in existence for about five years.

“We’ve really gotten a lot more serious in the last year or so,” Tom reported, “which is really exciting, because even though New York is the number two apple-producing state in the U.S., we’re still dwarfed by Washington State. If we want to continue to be efficient and continue doing business in New York, we’re going to have to work together, not only just among the Western New York industry – we’re all going to have to work together.”