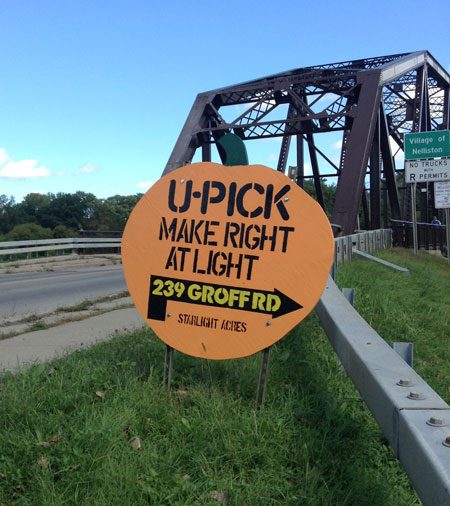 This sign features many elements that make it effective: It is the shape of the product being offered, it’s large, it’s easily readable, it has highly contrasting colors – and the arrow even helps to direct customers in the right direction.

Some shoppers go out with a very specific idea of what they wish to purchase. Others let themselves fall victim to their impulsive whims. How does a greenhouse or farm stand draw in both of these types? Let the customers know exactly what you have before they drive past with your signage.

But what truly draws a customer’s eye to your sign (and their cash from their wallet)? Is it something as simple as a hand-painted “Sweet Corn Ahead” sign? Is it poster-sized or billboard-sized? Does color matter? Anyone who grows knows that planting, growing and harvesting is only a part of the battle. Marketing is becoming increasingly important in the war for satisfied customers.

Signs that are too small or unclear to potential consumers are an issue, leading some businesses to lose potential customers, according to University of Cincinnati (UC) Marketing Professor James J. Kellaris, Ph.D. A UC analysis of a market research survey of North American households a few years ago found that inadequate signage could be construed as a communication failure.

“About half the population surveyed in 2011 has driven by and failed to find a business due to signage and communication failure,” Kellaris said.

According to Kellaris, shoppers tend to favor signs that are visible, legible and informative – but those preferences contradict current trends of smaller, more uniform signs which use non-verbal symbols/icons – such as a drawing of a pumpkin or an ear of corn rather than their names spelled out.

When Country Folks Grower polled about two dozen people on what caught their eye on the side of the road, more consumers seemed to favor hand-painted signage over professionally printed signs:

“For me personally, aside from looking better, hand-painted signs are maybe ‘more real’ in a way,” one respondent said. “It also just reminds me of growing up on the farm. I’ve always preferred that over the mass-produced ones you can get from big box stores.” 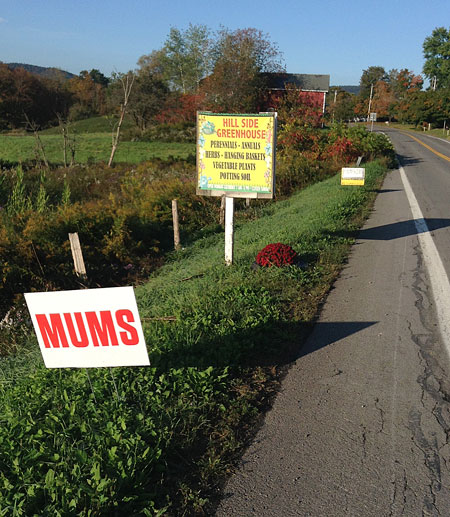 The size of the wording on your sign is important to those driving past, but so is the color contrast between the letters and the background. A dark color on a light background tends to work better than the opposite color scheme.
Photos by Courtney Llewellyn

Another stated, “For whatever reason, I seem to like the neat handmade signs – not too crowded with prices and words. It makes me feel like I am helping the small Mom and Pop operations.”

“I think hand-painted is all the rage right now. The not-so-perfect signs are what people really want,” said one farmer. “I think it brings home a nostalgic feeling and personal connection.”

However, another wrote, “Professional-looking signs would attract me. I want to frequent a business establishment that has its act together. I prefer a less personal or intimate transaction.”

Overall, though, those polled definitely said legibility was the most important factor. Dark/light contrast was a desirable trait, as was uncrowded text.

“A general trend in signage is dynamic, digital signage. Such signage is attention-getting and maximally flexible,” Professor Kellaris told Country Folks Grower. But those running farm stands may not have the desire or the means for digital signage. “The ‘best’ signage communicates the character of the business it represents as well as the content of a message. Signs are the voice of a business and they have ‘personality.’ So there is no one best type of sign. The best sign is one that conveys a message effectively and in a way that matches the character of a business. In some cases – many cases – that could be something as simple as a hand-painted sign on plywood.”

Taking a step back from the signage itself, Kellaris pondered, “Why do people come to U-pick farms or patronize farm stands? For my family, it is not about the produce – although it doesn’t get any fresher than U-pick! It is an experience, a special form of bonding, a nostalgic tradition that draws us closer to the land and closer to each other. We pick fruit, but also make memories.”

Those who shop at farm stands most often are not growers themselves. In brief interactions with farmers, consumers can learn something, express their gratitude and even indulge in a moment of envy. “Their way of life seems ideal to those of us who don’t do the work or bear the risk of farming,” Kellaris stated. “It is a glance into our agricultural past, when life seemed simpler and more wholesome. It is an encounter with the best part of America.

“What does this all have to do with signage?” he asked. “Rustic, hand-painted signage may be very effective in conveying authenticity, warmth, home-made, nostalgia, simplicity, industriousness, work ethic and other positive attributes consistent with the businesses they represent. A hand-painted sign is ‘aesthetically congruent’ with the notion of U-pick, farm stands, etc., and in that sense should be effective.” 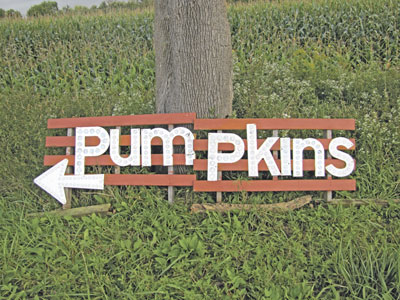 Big and bold is the way to go.

Kellaris noted, however, that there may be risks associated with hand-made signs. A poorly designed or executed hand-painted sign may backfire, sending unintentional messages of poor quality, sloppy work or incompetence. “In the absence of other information, people use available cues to draw inferences – so a poorly made sign could imply low quality produce,” he said.

Additionally, he said that if a sign is hard to read from the road (either because the letters are too small or the contrast between colors is insufficient), “it could trigger a disfluency effect wherein people subconsciously dislike the business the sign represents.”

The goal of those creating signage, Kellaris said, “is to find the right balance between the interests of shoppers, businesses and the broader interests of the community.”