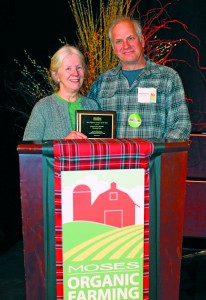 by Bill and Mary Weaver
The 2015 Organic Farmers of the Year, Greg and Mary Reynolds of Riverbend Farm in Delano, MN farm 30 acres that have been certified organic since 1994 in mixed vegetables, small grains and cover crops. Greg is the principal farmer and Mary, a physiotherapist, is an experienced farm hand. Greg has been a huge asset to the organic farming movement, both around the Twin Cities, where he sells his produce to a CSA, Co-ops, restaurants, hospitals and nursing homes, and throughout the Midwest, where he is a frequent speaker and a tireless encourager of new farmers.
Greg was introduced as the 2015 Farmer of the Year at the MOSES Convention by Nick Olson, who has been successfully farming organically for 6 years, in part because of the help he received from Greg Reynolds. “He was my mentor,” commented Olson, “and I still call him all the time with questions for him to troubleshoot.” Greg has worked with a lot of other beginning organic farmers, as mentor and friend and has hosted numerous field days to demonstrate organic farming methods.
In the past few years, Greg has begun actively working to save his own seed for over 100 vegetable varieties. He urged members to go home and start saving their seeds too. “Farmers have been saving their own seed since the dawn of agriculture,” he said, “We don’t do that anymore.” He remembered a time when there used to be hundreds of small regional and local seed companies in the Midwest and dozens more in Minnesota and Wisconsin, producing locally adapted varieties. Now plant breeders in large corporations decide what sorts of plants they want to breed.
Several incidents have motivated Reynolds’ interest in seed saving. ‘Prime Time’ and ‘Paragon’ tomatoes worked well for years, “They tasted good and were productive in our system,” he choose those two varieties after trialing 6 or 7 varieties for several years. Then one year, ‘Prime Time’ was only available in packets of 25 seeds. The next year, seed for ‘Prime Time’ was not available at all. “I decided to start trialing open pollinated tomato varieties,” explained Reynolds, “so I could save my own seed and have some control over the availability of seed for the varieties I liked. However, a lot of the open pollinated varieties blighted out the first year, producing skimpy stems with a tuft of leaves at the top.” So Reynolds began the process of patiently picking out the best plants with the best fruit and saving seeds from those. Gradually, he is developing strains that will work for his farm.
Then there was the arugula seed that brought to his fields a new leaf spot disease that rapidly turned the crisp leaves into a slimy mess. The disease was a form of pseudomonas never before seen in Minnesota, according to the USDA Disease Lab in Salinas California. “This disease affects the whole mustard family, including broccoli and cabbage and is spread by wind and splashing rain” Reynolds explained, “I used to have tremendous arugula sales around Minneapolis. That year, instead of our usual 15,000 bags of arugula, we sold only 2,000 and to do that, we had to spend days picking through disease-infested leaves, looking for ones that were salable.” Another year, 2/3 of his purchased Delicata seed didn’t emerge, even though it was given a good germination percentage, “probably in some lab someplace under perfect conditions,” Reynolds surmised. By the time he realized he had a problem and had ordered new seed, he had lost three weeks of his already-short growing season. “When I save my own squash seed, I may get some peculiar combinations, but I do have squash to sell.”
“In addition,” he noted, “a lot of seeds we grow in the Midwest were bred in moderate climates and don’t do very well under our local conditions. Some broccoli varieties bred in the mild Pacific Northwest will button and then go to seed when our temperature spikes to 80 degrees and then precipitously drop to 40 degrees. Also, seeds grown under conventional conditions often don’t do well in a cover crop situation, because they don’t get that first flush of nitrogen fertilizer.” What Reynolds is looking for is seed from plants that have characteristics he values, and that have done well in the particular microclimate of his farm, “We want seeds with a broad genetic base that do well in cold, dry, hot, or wet growing conditions.” The only way to ensure the availability of seeds with that adaptability, as well as the desired characteristics, was to begin to save his own seed, just as the Farm Breeding Club, under the leadership of the Podolls and others, has so successfully been doing to breed varieties that are well adapted to the difficult growing conditions in the Dakotas.
That means putting up with plastic buckets full of rotting tomatoes, because that is how you separate the seed from the sticky, jellylike material in the center of the tomato. It can mean needing to separate varieties that could cross-pollinate by more distance than is available on his farm. “Your produce customers may get put off with a 40 pound buttercup squash,” he joked, “but a lot of squash crosses really do taste good.” But he is learning. “You don’t have to be serious about this. Seed saving is fun!” he asserted. “As you see that you are making progress, you kind of get drawn into it.” But he needs the participation of other organic farmers. “My vision is that the organic farmers in this area become a local vegetable company, distributing seeds of varieties with a broad genetic base that are well adapted to the frequently difficult growing conditions in our area. This will take the collaboration of many farms. We would need to make available more than one variety of kale or cabbage, for example.”