Culitvate’16 attendees find their place in “The New Now” 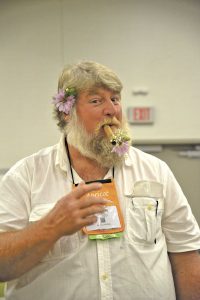 by Alex Huebner
Change was in the air throughout the Greater Columbus Convention Center during this year’s edition of Cultivate. From the construction happening all around, to “The New Now” theme of the show, to the spirited panels and seminars, all sides of the business were facing and embracing a new chapter in the horticulture industry.
Cultivate‘16’s overarching theme this year was “The New Now.” According to the convention’s website, “The face of horticulture and the definition of ‘gardening’ are vastly different than what they used to be.” Gone are the days of the one-size-fits-all garden center. Businesses now need to appeal to emerging demographics like Urban Gardeners, D.I.N.K.s (Double income, no kids) couples who have a new home and plenty of disposable income, and millennials. A lot of these customers “want to garden, but don’t want to be gardeners” said Ian Baldwin, a retail consultant who hosted two seminars at the show.
This sentiment was reflected during the roundtable discussion “Still Selling a 1980’s Message in the 21st Century?” The panel, which included a diverse set of nursery and garden center owners, communications specialists and marketers, spoke about the challenges traditional operations are facing in the changing times.
“It’s not about what we think is cool,” said one panelist. “It’s not about what we want to sell.” Now, it’s about identifying your audience and giving them “an exceptional experience.”
Cultivate’16 encouraged attendees to learn about how to appeal to these new audiences. One display outside of the trade show broke down all the different types of consumers in the horticulture world and what they buy, when they buy, etc. Then solutions were listed on how to cater to these consumers and turn them into loyal customers.
There was also change going on at the show itself. Parts of Cultivate’16 were relocated to accommodate ongoing construction. The Greater Columbus Convention Center is currently undergoing a major renovation. The outside and inside of the building are receiving a face-lift and 10,000 square feet of meeting space and 36,000 square feet of exhibit space are being added.
According to AmericanHort President and CEO Ken Fisher, next year’s event will be utilizing this space by adding meeting space, learning space, a “fast-pitch” stage and expanding the trade show floor.
With the varied classes, speakers, exhibitors and expansion of the show, Cultivate’16 helped attendees find their place in this new future.
Cultivate’17 will take place July 15-18.